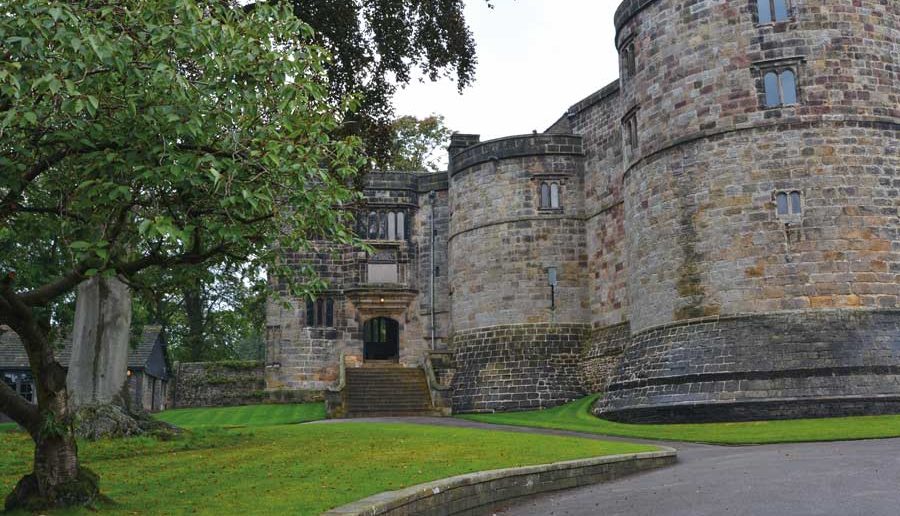 Skipton Castle is one of the most impressive in Yorkshire to visit, being largely intact and of course steeped in history.

It started life in 1090 as a timber motte and bailey fort built by the Norman baron Robert de Romille following the Harrying of the North, who soon realised that his primitive structure was not enough to deter the Scots on their frequent raids into the north of England during the 12th and 13th centuries. It was replaced by a stone castle on high ground with a sheer precipice to the rear providing natural defence.

Skipton Castle was owned for much of its history by the famous Clifford family after the Romille line died out, with Edward II granting it to Robert Clifford in 1310 when he was appointed the first Lord Clifford of Skipton and Guardian of Craven. Already in charge of numerous other properties in the north including Appleby and Brough castles, Lord Clifford’s acquisition of Skipton allowed his influence to extend east towards York. Robert immediately began improving the castle’s fortifications including commissioning the six drum towers of the inner ward, but he was killed during the Battle of Bannockburn just four years later in 1314, meaning he never saw the work completed.

The Cliffords were an influential family throughout the 15th century and strong supporters of the Lancastrian monarchs. John Clifford had fought at the Battle of Agincourt in 1415, his son Thomas was killed during the first battle of St Albans in 1455 fighting for Henry VI, and it is alleged that his son John Clifford delivered the death blow to Richard Duke of York at the Battle of Wakefield in 1460, before being killed himself the following year at the Battle of Towton. Following the Yorkist victory at Towton, Skipton Castle was confiscated from the Cliffords and granted to Edward IV’s loyal man William Stanley. Richard Duke of Gloucester (Richard III) also owned Skipton for a time following an exchange with Stanley for Chirk Castle. This was the only brief time that the Cliffords lost control of Skipton during a 350-year ownership – gaining it back after the tides turned again at the Battle of Bosworth in 1485.

The Tudor regime was a prosperous time for the family, and as a result Skipton. Henry Clifford was made Earl of Cumberland by king Henry VIII and to reflect his new status the castle was once again modified. This time the Long Gallery was added, as was the Octagonal tower in 1535, turning the structure into more of a palace than a fortification. This was regretted at the outbreak of the Civil War in 1642 when it hastily had to be refortified for the king.

Skipton withstood a siege by the Parliamentarians in December 1642 and even after the Royalist defeat at the Battle of Marston Moor it stood strong, the garrison only being overwhelmed in December 1645. The Royalists regained Skipton Castle during the Second Civil War, but as punishment, Cromwell ordered it to be slighted.

Following the civil wars, Skipton found itself once more back in the Clifford family. Lady Anne Clifford fought voraciously for her rights to take over the family seat as a female and upon her success was determined to return the ruined building back to its former glory with a huge renovation in 1657. She had to ensure that the reconstruction was cosmetic rather than functional, so upper walls and roofs were built too weak to support cannon. She also added the elaborate Gatehouse and planted the yew tree in the central courtyard. Lady Anne died in 1676 without a male heir and Skipton finally passed out of the Clifford family.

Today, the castle is owned by the Fattorini family who still have a private residence there. Apart from the private wing, the rest of Skipton Castle is open to the public, and it grabs your interest from the very first steps you take. The ticket office is housed in the Shell Grotto and Shell Room in the east tower of the gatehouse. One of only two such grottos in the country, the walls are adorned with volcanic rock, Jamaican coral and Guernsey ormer shells, creating a tableau showing the four deities of Fire, Air, Water and Earth. It was made for Henry Clifford between 1626 and 1629 by Frenchman Isaac de Caus.

Entrance to the castle itself is via the Lady Anne steps, although medieval visitors would have entered across a bridge spanning a moat. Fully roofed, the castle is fascinating to walk around taking in everything from the Banqueting Hall to the medieval kitchen to the dungeon! Throughout the castle you can find many examples of Masons’ marks carved into the stones so that they could be paid for their work, and I found the odd example of medieval graffiti too. Lady Anne’s influence is easy to see too from her name and dates above door lintels and the famous yew tree which provides a focal point in the magical Tudor courtyard. Within the grounds there is the chapel, and if you fancy a walk after visiting the castle, Skipton Castle Woods makes for a scenic stroll with views of the rear of the castle sat atop the cliffs.

This remarkable castle is a must see in Yorkshire. Along with access to the general public, Skipton Castle also hosts events throughout the year and can also be booked for small weddings, providing a unique historical backdrop to your special day.