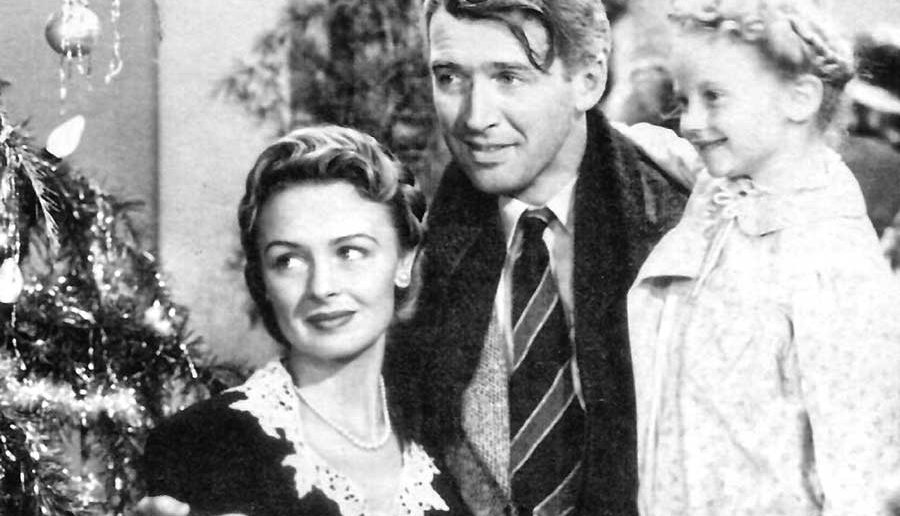 “Every time a bell rings, an Angel gets his wings.”

One of the most familiar quotes in cinema history from perhaps the most beloved film of all time, a Christmas film that stands out head and shoulders above all the others, what else could it be other than that timeless classic ‘It’s a Wonderful Life’ made in 1946.

The film was based on the story, ‘The Greatest Gift’ written by Philip Van Doren Stern in 1939 which also had reminiscences of Charles Dickens’ classic tale, ‘A Christmas Carol’.  At the time it was rejected by several publishers, so he had two hundred printed as a twenty-four page pamphlet and then sent them as Christmas cards to relatives in 1943. Stern’s daughter Marguerite recalled:

“I was in the third grade and remember delivering a few

of these cards to my teachers and my friends. My father,

who was himself from a mixed religious background,

explained to me that while this story takes place at

Christmas time, and that we were sending it as a

Christmas card to our friends, it is a universal story for

all people in all times.

In December 1944, the story was published as a book illustrated by Rafaello Busoni. Stern also sold the story to ‘Reader’s Scope’ magazine and ‘Good Housekeeping’. in that same year under the title ‘The Man Who Was Never Born.’ The fictional setting of Bedford Falls was modelled on Califon in New Jersey.

One of the pamphlets from earlier was seen by RKO Pictures producer, David Hempstead who in turn showed it to British born actor, Cary Grant who became interested in playing the lead role, but as we know it eventually went to James Stewart. RKO Pictures paid $10,000 for the motion picture rights in April 1944. A year later, RKO sold the rights to the story to Frank Capra’s production company, ‘Liberty Films’ for the same $10,000. Capra adapted the story under the name, ‘It’s A Wonderful Life.’ James Stewart wrote to Stern in December 1946 saying that the story was:

“an inspiration to everyone concerned with the picture…the

fundamental story was so sound and right.”

“that horrid man, he couldn’t wait to get writing

“We told him what we were going to do, and

he said ‘that’s fine’. “We were trying to move

the story along and work it out, and then

somebody told us that Capra and Jo Swerling

were working on it together, and that sort of

took the guts out of it. Jo Swerling was a very close friend

of ours, and when we heard he was doing this we felt

rather bad about it. We were getting near the end and

word came that Capra wanted to know how soon we’d

be finished, so my wife said ‘we’re finished right now’.

We never saw him again after that”.

What Hackett called Capra is hardly suitable for a family newspaper and is perhaps best left to the reader’s imagination. Suffice to say, he was said to resemble a very arrogant male offspring of a female member of a popular domestic canine animal.

Eventually, the final screenplay was completed and the writing was credited to Goodrich, Hackett and Capra with ‘additional scenes’ by Jo Swerling.

The film’s basic plot line is about George Bailey, played by James Stewart who contemplates suicide on Christmas Eve in the town of Bedford Falls. Prayers to heaven from his family and friends lead to ‘Clarence Odbody’ an angel who is sent down to save George. Flashbacks of George’s life are seen from 1919 and George is twelve years old and saves his younger brother Harry from drowning. George goes deaf in one ear after this as a result. He also has an after-school job at the local druggist, who accidentally puts poison in a prescription for a child after receiving news of his son’s death in the war. George saves the day after he spots the mistake and points it out to Mr Gower the druggist.

Time passes and George inherits his father’s business a building and loan company, but the meanest man in town, Henry Potter has other ideas about it wanting to eliminate the business as he sees it as a competitor. Eventually, as already said, George contemplates suicide by jumping into the river but instead spots a man already struggling in the water. This is Clarence, who as a distraction makes out he is drowning and George ‘rescues’ him from the water.

The plot of course thickens, but I decided not to give any more away and leave it to the readers to see this film if they haven’t already done so.

When the film was released it didn’t do as well as expected financially, although it was nominated for five academy awards. Now though it is considered one of the greatest films of all time by the American Film Institute. Director, Frank Capra considered it his favourite work and used to screen it for his family every Christmas.

The film really is a ‘must see’ and was also ‘coloured’ in recent years but the black and white version for me is the best. if any reader out there hasn’t yet seen it and decides to, be warned this is arguably one of the weepiest films you will ever see and a large box of tissues should be close at hand.