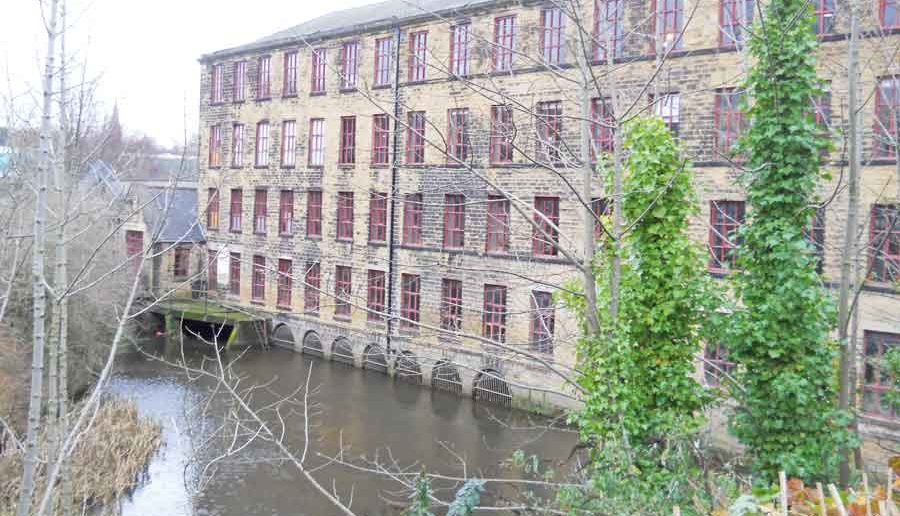 ARMLEY MILLS Once The Largest Woollen Mill In The World

Leeds started life as a small Saxon settlement but rapidly grew during the 16th and 17th centuries as it became an increasingly important cloth trading town. Of course, in order to sell the cloth it had to be made and mills were a major source of employment. This month, a year on from the floods that ruined homes and businesses, we look at Armley Mills – once the largest woollen mill in the world, which was also badly affected. Read on to learn about the history of the mill including why it was sometimes referred to as the ‘dark satanic mills’ through to its life today as Leeds Industrial Museum.
ARMLEY MILLS IN THE BEGINNING
A document from 1707 describing ‘Armley Millnes’ which Richard Booth leased from Henry Saville is the earliest record of the mills. It states the building as a Fulling Mill containing two wheels and four stocks. In 1788, the mill by now housing five waterwheels and eighteen stocks was put up for sale. Fulling is one of the final processes in cloth production where the cloth is pounded with a large hammer in a mixture of water, urine and ‘fullers earth’ which caused the fibres to felt. A notice of sale on the 5th February of that year in the Leeds Intelligence stated ‘Armley Mill… no situation in the West Riding of Yorkshire is superior if any equal.’
The person to purchase it and turn it into the world’s largest fulling mill was Colonel Thomas Lloyd, a prosperous Leeds cloth merchant risen to Deputy Lieutenant of the West Riding and Commander of the Leeds Voluntary Infantry. Rather than running the mill himself he leased it to two brothers Israel and John Burrows.
MOVING ON
In 1804 Armley Mills was sold again, this time to Benjamin Gott – an important figure in the wool industry of Leeds who was also mayor of the city in 1799. It is Gott’s mill which survives largely intact today, as just a year after his purchase the mill was almost completely destroyed by fire. The new mill was built using fireproof materials such as brick and iron where possible.
Gott’s Armley Mills flourished and under his management exported to North and South America, the Far East and Europe. He became one of the largest employers in Britain and was incredibly wealthy upon his death in 1841. Gott had reinvested plenty of money back into the mill, improving it and buying new ones. He also founded alms-houses in Armley. He was a popular local figure and his obituary read ‘No-one in the West Riding stood higher as a man of business. He possessed large stores of information, a vigorous intellect, remarkable decision of character, and a fine taste. No man was ever more regarded or esteemed in his circle than Mr Gott.’ A millionaire, his home Armley House overlooked the Kirkstall Valley and is now well known to locals as Gotts Park Mansion.
Gott’s sons John and William took over the business and introduced steam power to Armley Mills. This first steam engine supplemented the waterwheels rather than replace them, they continued to run until the 1880’s.
In the 1860’s the mill was leased to Kinnear, Holt and Company who were the ones to install spinning machinery to add to the fulling process already taking place there. In the later decades of the 19th century Armley Mills was leased by various tenants until 1907 when Bentley and Tempest took over the entire building.
This woollen clothing manufacturer had previously been one of the tenants but became the sole occupier. Back in the 1840’s, Steward Tempest one of the company’s founders had worked at Armley Mills at the age of just six years old as a ‘half timer’ which meant he spent half his time at school and half at work.
The 20th century was a difficult time though for the textiles trade. The breaking up of the British Empire caused a loss of export markets, and combined with increasing foreign competition and greater use of man-made fibres, Armley Mills finally closed its doors in 1969.

THE LIFE OF A MILL WORKER
Life as a mill worker was on the whole, difficult and dangerous. The huge hulking machinery could take fingers, limbs or even lives in a split second if workers lost concentration. The hours were long and as well as dangerous machinery, the atmosphere was constantly filled with minute wool fibres which would be inhaled with every breath. The pay was dependent on your role, the older and more experienced you became, you could move on to better paid roles. In the 19th century, some of the most dangerous and lowest paid positions available at Armley Mills were often carried out by children from as young as just six years old. Child labour was cheap and there was no legislation to protect them until 1833 when the Factory Act set the minimum age to 9 and maximum working hours to 48 per week. Prior to this, a typical working week would be six days from 6am to 8pm. Children would be beaten or fined for falling asleep or making a mistake.
At Armley Mills, and other similar factories, small children were sent underneath the moving machines to collect scraps of wool that had fallen onto the floor. They would also have been given a small brush with which to clean the machines whilst they were in constant operation. As to lose the brush would mean a beating or dismissal, the boys would fasten them around their wrist with a leather strap – often with lethal consequences. The poor children working in the mill were exhausted from long hours and laborious work. This combined with bad treatment from the managers meant many of the poor souls lost their lives in the mills. One terrible example of this was a child dying in a Leeds mill in 1832 when he was not allowed to stop work to go to the toilet. The desperate feeling of needing to go caused him to lose sufficient concentration as to cause his death.
Slightly older girls would be set to work as a ‘piecer’ which consisted of re-joining thread that had broken on the spinning jennys. This needed to be done quickly whilst the machine was in operation. Many a finger was lost this way.
The sad thing is, this work was done for little money. Families lived in poverty and had no choice but to send their children out to work. The mothers and fathers would often work in the same mill in more skilled roles and the combined wages of the entire family would be just enough to provide a small roof over their head and basic food. The contrast of the living conditions between a mill worker and a manager were stark. The appalling working conditions in the 19th century factories led to the term ‘Dark Satanic Mills.’
THE MILL AFTER CLOSURE
Shortly after Armley Mills closed in 1969 it was bought by Leeds City Council in recognition of its historical importance and re-opened in 1982 as Leeds Industrial Museum where you can see the city’s industrial heritage.
Unfortunately, the museum was badly affected by the horrific floods on Boxing Day 2015. Parts of the historic building were submerged under eight feet of water, which forced the museum to close for almost three months while staff undertook a massive clean-up. One year on, they have bounced back and created a special exhibition displaying photos, stories and artwork created by those affected by the floods alongside objects from the museum’s collection. The exhibition is running until summer, and a special plaque which was unveiled at the museum last May marks the exact height the flood waters reached.
It is fantastic to be able to visit the mills and get a glimpse into the past of the industrial working life of Leeds. The building remains of great importance to our city and long may it do so.
Our junior reporter Selina visited the museum recently and tells us all about it in her review.Leeds started life as a small Saxon settlement but rapidly grew during the 16th and 17th centuries as it became an increasingly important cloth trading town. Of course, in order to sell the cloth it had to be made and mills were a major source of employment. This month, a year on from the floods that ruined homes and businesses, we look at Armley Mills – once the largest woollen mill in the world, which was also badly affected. Read on to learn about the history of the mill including why it was sometimes referred to as the ‘dark satanic mills’ through to its life today as Leeds Industrial Museum.