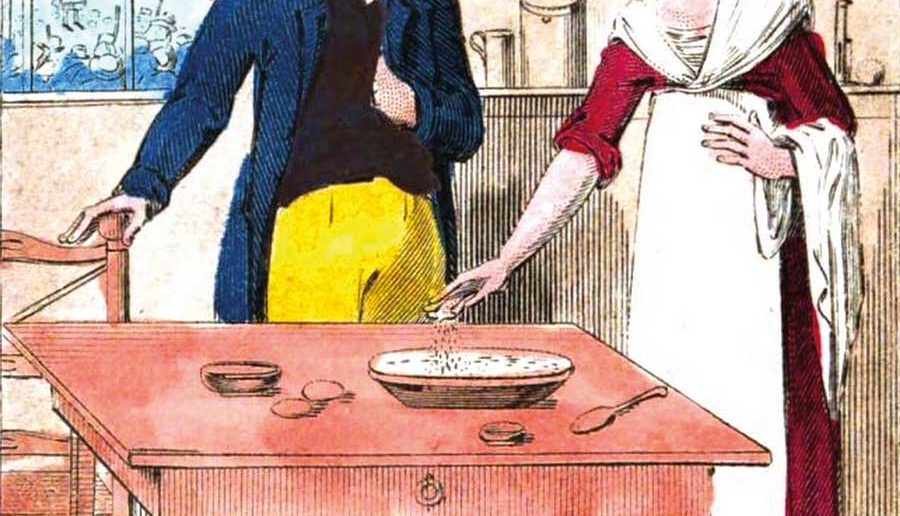 THE YORKSHIRE WITCH OR A COLD BLOODED KILLER?

With Halloween upon us, I thought I would share the story of Mary Bateman dubbed ‘The Yorkshire Witch’. Was Mary Bateman a witch, or was she a cold-blooded killer?

Born Mary Harker around 1768 in Asenby near Thirsk, as a farmer’s daughter she had the same start in life as any other girl in the area. As a teenager she went into domestic service for a family in Thirsk but lost her position as she was caught stealing. Thanks to a series of minor thefts and scams, she was too well known in the area and had to relocate to Leeds.

In 1792 Mary married wheelwright John Bateman. While John was an honest man, Mary couldn’t stop her impulses to steal and the pair moved frequently to avoid arrest. Like other women of the time Mary established a side-line as a witch by telling fortunes, brewing love potions, and removing ‘evil wishes’. There was still belief in the power of witchcraft, and she cashed in, finding it more profitable than stealing. By this time, they had four children.

As the 19th century began, Mary developed her fraudulent business by claiming to be the agent for an imagined character ‘Miss Blythe’ who could read the stars. As a supposed go between, clients flocked to Mary’s house delivering payment for Miss Blythe to predict their future. Mary became a shopfront for the imaginary psychic selling magic potions, charms and the like. This lucrative business wasn’t enough for her and her ambition soon led to murder.

Her first victims are alleged to be family of drapers, although she was never convicted of their murder. Mary helped in their drapery shop and when one sister fell ill, she treated the woman with powders from ‘Miss Blythe’. Unbeknownst to the unfortunate family, the powders were poisonous and soon all three of them were dead which Mary blamed on the bubonic plague. Mary robbed the house and shop but none of the neighbours thought to point their finger at the caring woman who had tried to help.

In 1806 Mary invented the ‘prophet hen of Leeds’, claiming that one of her chickens was laying eggs inscribed with the words “Crist is coming” and for a penny, people could be spared from the apocalypse. A local doctor spied Mary etching the eggs herself with vinegar but despite the discovery it seems she wasn’t punished.

Her final crime was to extort the Perigo couple from Bramley. Rebecca Perigo was suffering from mental health issues, probably anxiety and depression which her doctor put down to evil spirits. Her husband William sought out Mary to contact Miss Blythe. Through letters delivered under the guise of Miss Blythe, Mary managed to get money, clothes and other expensive items from the Perigos in exchange for potions to help. Food and medicines delivered from Miss Blythe were poisoned and on 24th May 1807 Rebecca died. For two years following her tragic death, William continued to pay Mary for Miss Blythe’s protection, but wondered why nothing was helping. Finally suspicious, he unpicked stitches from silk purses which Mary had sown into Rebecca’s bed and discovered that they did not contain money as promised, but wastepaper. She was arrested for her deception and the constable uncovered items in her house that the Perigos had supposedly paid to Miss Blythe.

Mary was imprisoned and the Hull Packet newspaper reported at the time that the scam was “almost without precedent, for gross villainy on the part of the deceiver, and blind credulity on the part of the deceived.” Her trial began on 17th March 1809 and she denied everything, saying “it is utterly false that I ever did send for any poison by any person.” Witnesses came forward and letters from Miss Blythe were discovered with handwriting matching Mary’s. Mercury and arsenic were discovered in potions in Mary’s house and the earlier deaths of the drapers were seen now in a more sinister light. The judge was in no doubt of her guilt and she was sentenced to death.

On 20th March 1809 Mary was hanged. Her body was brought to Leeds Infirmary where people paid three pence to view her remains and some even purchased a dried and preserved patch of her skin. Today her skeleton is stored at Leeds University but was on display for two centuries – first at Leeds Medical School and later at Thackray Medical Museum!

I think it is safe to say, that while Mary Bateman was clearly no true witch, she was far from innocent – one of the most cunning murderers in the history of our city.