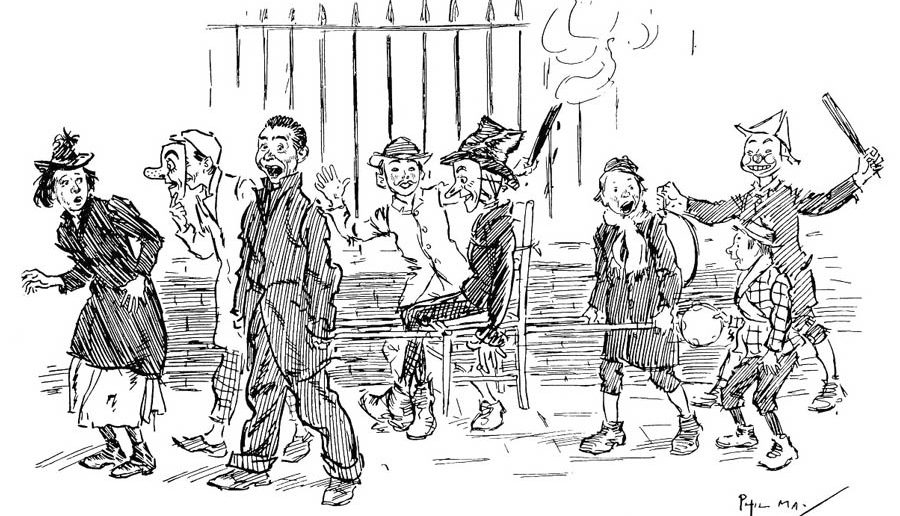 “Black and white art can be summed up in
two words – Phil May.” He was talking about the renowned black and white cartoonist of the Victorian period who became ‘Punch’ magazine’s most celebrated artist by sketching local people and scenes in his native Yorkshire.

Born Philip William May in 1864 at 66 Wallace Street, Wortley in Leeds, a small, frail child to Philip and Sarah, daughter of the manager of the Theatre Royal in Newcastle upon Tyne. Phil’s father had been an unsuccessful engineer studying under the famous George Stephenson, but also had an interest in painting, and during Phil’s infant life, his father would take him to Leeds Art Gallery. A Mr Howgate, in charge of the gallery, saw potential in Phil:

“I saw the exceptional character of the child….his eyes had a dreamy far off look.”

Phil’s father didn’t live to see his son’s success, he died when Phil was nine years old leaving the family almost penniless. Phil’s mother’s interest in the stage rubbed off on him, and he became friendly with the son of Leeds Grand Theatre’s scene painter who let him mix paint and do other small jobs. Phil would also draw some of the acts and sell them, attracting the attention of the novelist, George Augustus Moore who described Phil as:

The stage attracted Phil, and in 1879 he joined a theatrical touring group. His first ‘professional’ appearance was at the Spa Theatre in Scarborough, and as well as doing some acting, he did about six drawings a week to earn money.

London beckoned Phil, and in 1883 he arrived there with a few shillings in his pocket. He was met by his uncle, Fred Morton a theatrical manager. Phil’s uncle wasn’t convinced of his acting ability, putting him back on the train for Leeds after showing him some of the London sights, but Phil was determined to do something with his life, and exited the train at the next station and walked back to London.

Life was hard having nowhere to live and sleeping wherever he could. He would sell drawings in order to eat. He decided to return to Leeds feeling down and unwell, but before returning he was put in touch with the magazine ‘St Stephen’s Review’ as a result of a letter of introduction after having drawn the great actor, Henry Irving.

Arriving back in Leeds, he received a letter telling him that the illustrations for ‘St Stephen’s Review’ Christmas edition done by another artist were unsuitable, and would Phil like to take on the job. Phil eagerly took on the job, locked himself in a room and stayed there until he finished the drawings, and was well paid, managing to pay off his debts. After this, his health and spirits picked up and in early 1885 having made a great impression, he was put on the staff of the ‘St Stephen’s Review’ magazine.

Phil met Sarah Farrar who kept a confectioner’s shop opposite the Grand Theatre in Leeds. She was married but this didn’t stop them having an affair and soon the shop was sold and they moved to London. Another boost to his career happened when William Traill the managing director of the ‘Sydney Bulletin’ came to England looking for a suitable cartoonist and offered Phil a three year contract with the paper. Phil was unsure about taking up the offer and having to move so far away. However, when the offer increased from £15.00 a week to £20.00, he gave in, signed the contract and on November 11th 1885 he and Sarah sailed to Australia and were married in 1887 a year after Sarah’s divorce.

Australia was expanding with opportunities to earn good money. It was here he learned to get rid of the ‘lines’ in his drawings that he found unnecessary. After three years with the ‘Sydney Bulletin,’ wealthy Australian, Theodore Fink who liked Phil’s work offered him the chance to travel Europe at his expense, and Phil accepted. Rome and Paris influenced and impressed him immensely, and after returning to London for a while, he returned to Paris.

Finally settling back in London, he worked freelance, selling drawings to magazines and papers. He also joined a club with the quaint name of ‘You Be Quiet Club’ which helped Yorkshire men living in London to get to know each other, designing programmes for their various functions. It wasn’t long before he was contributing to several publications, ‘The Pall Mall Budget,’ ‘The Sketch,’ ‘The Daily Graphic,’ ‘The Daily Chronicle,’ and in 1895 joined the team of ‘Punch Magazine’ where he would work for the rest of his short life. As well as being famous for work in ‘Punch,’ he also became well known for his annual’s published for some fifteen years. In 1886 his ‘Guttersnipe’ series appeared which portrayed street life in his native Leeds when he was a child. The characters he created would often be children playing games, with some looking in the river mud for money that had been lost. Others might be smoking cigarette ends that had been discarded and all kinds of ‘street urchins’ wearing ‘cast offs’ from relatives. Phil was asked once why he drew such life-like characters, he replied:

“After all, I was a guttersnipe myself”.

“Children of the gutter roam about free and are often hungry, but what would one give for such appetites? Sometimes I wonder if they don’t lead the happier lives.” Phil’s problems were two-fold, too generous for his own good giving away money faster than he could earn it to those who would take advantage. His greatest foe was alcohol, enjoying too many whisky’s taken from a barrel he kept topped up in his house for guests, but this would be his eventual downfall.

Phil May was a man of great character, absent minded, always willing to help others out financially, sometimes to his own detriment. He would also give to the poor, remembering his own poor upbringing. His humour remained with him to the end which happened on August 5th 1903 at the age of thirty-nine from cirrhosis of the liver. He was buried in Kensal Rise cemetery in London. A few days before he died he composed his own epitaph which reads thus: