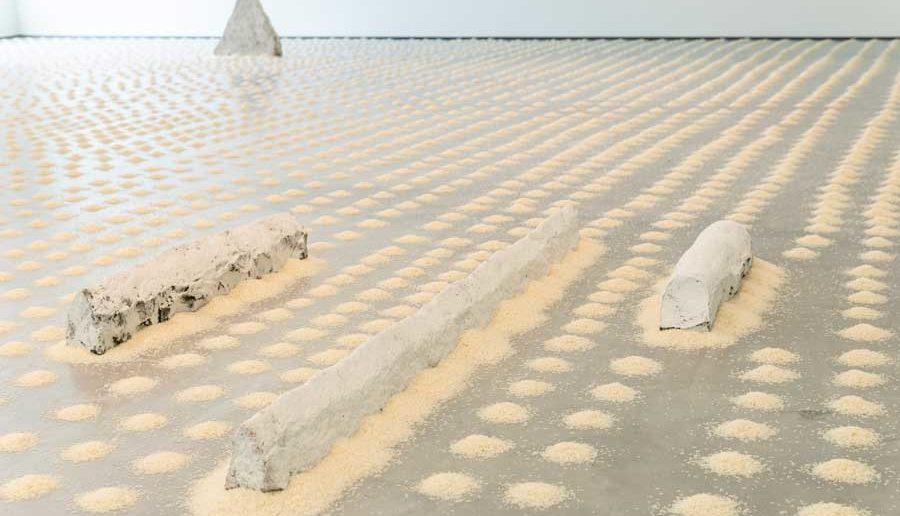 Our glorious county of Yorkshire is famous for many things, including its creativity! Yorkshire has produced many influential artists and it is easy to see why when we are surrounded by stunning inspiration from the coast to the moors, the sprawling countryside to the dynamic cities. Four art venues in the county combine to make the ‘Yorkshire Sculpture Triangle’ – Henry Moore Institute, Leeds Art Gallery, The Hepworth Wakefield and Yorkshire Sculpture Park.

These four world-renowned galleries are hosting major exhibitions this summer as part of the inaugural edition of Yorkshire Sculpture International (YSI) – an exciting programme of sculpture and events which builds upon Yorkshire’s rich history as the birthplace of pioneering sculptors such as Barbara Hepworth and Henry Moore. This is the UK’s largest dedicated sculpture festival and is on view until 29th September. Featuring 18 international artists from 13 different countries, the new commissions and exhibitions respond to a provocation made by artist Phyllida Barlow in 2018 – that ‘sculpture is the most anthropological of the artforms’.

Most events are family friendly, so the festival is a fantastic opportunity to introduce children to the joy of art over the summer holidays. With the huge variety of sculpture on display in the galleries and public outdoor spaces, as well as child focussed events, their imaginations are sure to run wild!  In this month’s feature we look at some of the highlights and must sees of the first ever YSI!

At Leeds Art Gallery a series of solo shows and new commissions explore the breadth of contemporary sculpture-making, including the first solo exhibition in the UK by Nobuko Tsuchiya (b.1972, Japan). Tsuchiya uses a variety of media to create imaginative and playful sculptures that evoke an arresting narrative quality. Tsuchiya has used the White Gallery as a studio to assemble the final works.

Rachel Harrison (b. 1966, USA) is exhibiting a group of works in the Small Lyons Gallery that relate to the body. Harrison’s work draws from a wide range of influences, combining art historical and pop cultural references through a witty assemblage of materials. Joanna Piotrowska (b. 1985, Poland) is taking over the Large Lyons Gallery, carpeting the floor and installing a series of composed black and white photographs which explore notions of the human body and social structures. Piotrowska’s work examines the complex power dynamics and psychological effects of human relationships.

Ayşe Erkmen (b. 1949, Turkey) has created a site-specific sculpture for Leeds Art Gallery’s Central Court that responds to the many architectural changes that have taken place throughout the life of the building. Revealed during the 2016 renovation of the gallery, the original barrel-vaulted glass roof has been hidden since the 1960s above a false ceiling created to block out the light. Erkmen has transformed the Central Court by adding a new ceiling that reaches all the way down to this later added floor. The installation creates space at the entrance for visitors to observe the entire room and to walk underneath and inside the roof sculpture.

Leeds Art Gallery is also exhibiting a major re-display of their sculpture collections in the Large Sculpture Gallery to accompany the individual artists’ presentations. The exhibition ‘Woodwork: A Family Tree of Sculpture’ proposes that wood might be the most anthropological of materials, crossing cultures and time through its plasticity, portability and durability. The display considers the correspondence between maker and material and features works from Leeds Art Gallery’s collection of British sculpture alongside objects from Africa, India, China and Myanmar, part of the world cultures collection of Leeds Museums and Galleries. The exhibition also presents eight new acquisitions for the sculpture collections, including L’Homme by Ronald Moody (1937), a carved oak mask first exhibited in Paris in 1938. ‘Rituals, processes & tools’, a collection display in the Lower Sculpture Study Gallery produced by both Leeds Art Gallery and Henry Moore Institute, focuses on enigmatic sculptures and drawings from the Leeds sculpture collections, dating principally from the 1970s and 80s and includes new and recent acquisitions.

The Henry Moore Institute is presenting a major exhibition in the main galleries that brings together an assimilation of debates around the use of material culture in understanding human behaviour, history and the responsibility of objects today.

As part of the exhibition, Rashid Johnson (b. 1977, USA) is presenting a new installation that features three table sculptures made entirely from shea butter, a material that has come to be traded in North America and Western Europe as a form of exoticism with healing properties. Three phases of sculpture are presented: a series of portrait busts, a reimagining of Western abstract art and, in a reflection upon the fundamental human need to make and leave traces, an invitation to the audience to make their own forms. Johnson’s work embraces a broad range of media to examine issues of roots, race and identity, especially in black America.

Inspired by anthropology, linguistics and archaeology, Maria Loboda (b. 1979, Poland) has created a series of lamps, based on 1920s French design, each encasing insects.

Tamar Harpaz (b. 1979, Jerusalem) is known for sculptures that use light, mirrors and lenses to create uncanny optical illusions. For YSI, she has created a new installation comprised of a collection of found objects surrounded by a perimeter of electric cable that will be activated periodically by a 12-volt electric pulse, sounding out an unexplained code. Cauleen Smith (b. 1967, USA) is also presenting an installation at the Henry Moore Institute. Reactivating archives and harnessing the power of imagination, her work especially addresses issues faced by black women today. Smith is presenting her film Sojourner, 2018 in a new installation. The film takes its name from and pays homage to activist Sojourner Truth and depicts a reimagining of the Noah Purifoy Outdoor Desert Art Museum in Joshua Tree, California as a radical feminist utopia.

Sean Lynch (b. 1978, Ireland) has realised a project for the Henry Moore Institute Research Library based on the life and work of ‘Flint Jack’, a nineteenth-century Yorkshire antiquarian, vagabond and highly skilled artisan, who sold fake megalithic axe heads and ceramic and stone carving forgeries. Despite their lack of historical providence and verification, these objects still populate many UK museums.

The Hepworth Wakefield presents a series of commissions and debut UK presentations by established and emerging artists as well as new collection displays and contemporary interventions across all the David Chipperfield-designed gallery spaces. Centred around the theme of ‘truth to materials’, the exhibition investigates the idea that a sculptural form should be determined by the characteristics of the chosen materials.

A display of recent works by Jimmie Durham (b. 1940, USA) positioned in conversation with early sculptures and carvings by Barbara Hepworth and Henry Moore, highlights how each artist created their work to emphasise the natural properties of raw materials.

A major new installation by Wolfgang Laib (b. 1950, Germany), who only uses raw and natural resources in his work, takes over one of The Hepworth Wakefield’s largest galleries. Created entirely with rice, stone and ash, Laib explores the organic and life-giving qualities in the materials he uses, reflected in his meditative working practices whilst installing the work. The exhibition includes the debut presentation outside North America of self-taught, Jamaican-Canadian artist, Tau Lewis (b. 1993, Canada). A newly commissioned body of work is on display featuring a large-scale textile hanging and a group of soft textile sculptures collaged together. The work, inspired by a painting of a coral reef that hung in Lewis’ childhood home, reimagines as aquatic creatures the ancestors lost at sea during the transatlantic slave trade and contemplates the erasure of black histories.

Yorkshire Sculpture Park (YSP) is presenting a major exhibition of over 40 works by pioneering and highly influential American artist David Smith (1906–1965, USA). Widely hailed as one of the 20th century’s outstanding sculptors, this is the first solo exhibition of his work in the UK since 2006. This landmark exhibition charts the development of Smith’s unique visual language over four decades, crucially bringing together several of his sculptures in the open-air that are rarely seen in this way outside the USA. Within the Underground Gallery over 30 sculptures trace an unfolding narrative of material, technique and form. Beginning with Smith’s earliest constructions from the 1930s that combine wood with elements including mussel and clam shells, wire and nails, the exhibition spans work through to the artist’s mature, bold, large-scale painted and stainless-steel sculptures of the 1960s.

In Yorkshire Sculpture Park’s historic chapel, Kimsooja (b. 1957, Korea) is presenting a new installation titled To Breathe, which uses light and mirrors to blur expected boundaries. The floor, covered with a mirrored surface, provides an entirely new way of seeing, seeming to open and unfold the space, making solid surfaces and confining structures appear fluid and expansive. By placing diffraction film on all the windows, the light that enters forms a myriad of rainbow spectrums across the space, which are reflected infinitely via the mirrored floor. Kimsooja’s practice reflects traditional forms of female labour and craft, such as sewing and weaving, to investigate the role of women. Responsive to the natural environment, the installation changes according to the light quality and intensity, making every experience unique. Kimsooja’s 14-metre-high sculpture A Needle Woman: Galaxy was a Memory, Earth is a Souvenir (2014) is also sited in Lower Park.

Alongside the programme, major sculptures by Damien Hirst (b. 1965, UK) are being shown at Yorkshire Sculpture Park, Leeds Art Gallery and in Leeds city centre. The Turner Prize-winning artist grew up in Leeds and went on to study at Leeds College of Art in the early 1980s, as Barbara Hepworth and Henry Moore had done 60 years earlier. Two of his major sculptures are on display in the public realm in Leeds city centre this summer. The marble Anatomy of an Angel (2008) is on display in the Victoria Quarter, and the six-metre-tall bronze sculpture Hymn (1999-2005) is on Briggate. Charity (2002–2003), Myth (2010), The Hat Makes the Man (2004–2007), and The Virgin Mother (2005–2006) are on show at Yorkshire Sculpture Park. Black Sheep with Golden Horns (2009), part of Hirst’s formaldehyde series, is on display in Leeds Art Gallery’s Ziff Gallery, in dialogue with the historic painting collection which covers the years 1888 to 1900.

Huma Bhabha (b. 1962, Pakistan) is presenting a major new sculpture, a large-scale bronze work titled Receiver, installed outside County Hall in the centre of Wakefield. Receiver is Bhabha’s first public realm commission in the UK and is on display for the duration of the festival. Working almost entirely with figurative sculpture, Bhabha’s approach is unconventional and cross-cultural, making connections between histories, languages and civilisations. Carving and moulding materials such as Styrofoam packaging, cork, clay and plaster, Bhabha’s work has a timeless quality and her practice is a meditation on new ways of approaching the tactile challenges of sculpture-making. Internationally renowned, Bhabha was honoured with the commission We Come in Peace for the Roof Garden at the Metropolitan Museum of Art, New York (2018).

The inaugural YSI is truly showcasing the best of sculpture from around the globe with different cultures, materials and environments all coming together to produce this fantastic display of art. There is something for everyone and this is an exciting opportunity to view work you would normally have to travel the world to see!

For more information on the festival, including special events for children and families, visit www.yorkshire-sculpture.org