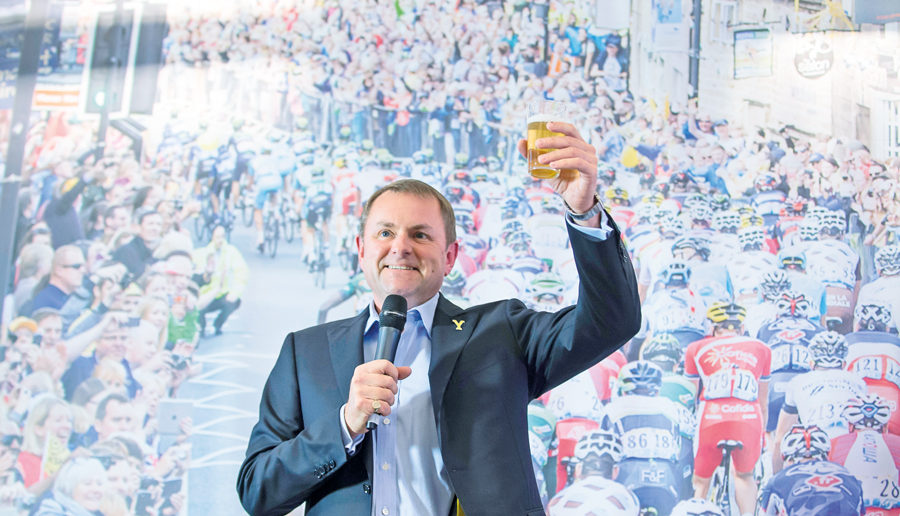 The towns and cities across Yorkshire being lined up as host locations for the 2019 UCI Road World Championships have been revealed.

Harrogate has been named as the main competition town and finish location for each race. Race start locations have been proposed in Beverley, Doncaster, Leeds, Northallerton, Ripon, and York.

The 2019 UCI Road World Championships include a wide range of men’s, women’s and junior races, which take place over nine days. Harrogate will host two circuit races and the other races will start in locations right across the county.

The event in September 2019 will mean cycling on a scale never seen before heads to Yorkshire. This will build even further on the county’s growing global reputation for the sport after the hosting ‘the grandest of Grand Départs’ for the 2014 Tour de France and the annual legacy race the Tour de Yorkshire which has continued to grow each year, with record breaking spectator numbers.

Yorkshire won the right to host the event after a joint bid between Welcome to Yorkshire, British Cycling and UK Sport and the Department for Culture, Media and Sport.

The government has committed to invest £24 million into the event, £15 million of which will be used to develop 27 cycle sport facilities across the UK which will leave a lasting grassroots legacy. In addition, there will be £3 million of National Lottery funding from UK Sport.

“The 2019 UCI Road World Championships will be a fantastic event that will see the very best cyclists competing for the coveted rainbow jersey with Yorkshire’s stunning scenery as the backdrop. I know that people from across Yorkshire and beyond will support this event and the riders will receive a fantastic reception. Hosting the Championships gives us a great opportunity to leave a legacy for the sport at the grassroots, with £15 million of government investment to build facilities and encourage participation across the country.”

“We are delighted to announce our intention to start the UCI Road World Championship races in 2019 in all four corners of Yorkshire making sure the races take in the full splendour of this beautiful and diverse county. This is an unprecedented opportunity to showcase Yorkshire to the world and I have no doubt that every town and village on the final routes will be ready with their famous Yorkshire welcome as seen for the Tour de France and now each year for the Tour de Yorkshire.”

“Following on from the hugely successful Grand Départ in 2014 I have been delighted to see the birth and development of the highly successful Tour de Yorkshire and was thrilled when we announced at last year’s world championships Yorkshire would host the UCI Road World Championships in 2019. Congratulations to each of the towns and cities that have been announced.”

“The announcement will generate huge anticipation across Yorkshire and it is also an exciting day for the rest of the country thanks to the £15 million national investment in cycle sport facilities. At British Cycling we judge the success of major events not only in medals won or in numbers watching but by people being inspired to get active by getting on a bike. The landmark facilities investment secured by British Cycling means a national legacy has been built into the championships from the start and marks all of the stakeholders in this event as pioneers, setting a new standard for the hosting of major sporting events.”

“Planning for the 2019 UCI Road World Championships is now well underway and it is great that so much of Yorkshire will play an important part in hosting the event. Thanks to investment from the Government and the National Lottery, Yorkshire will host a World Championships the whole country can be proud of. The event will further enhance the UK’s reputation as world-leading host of international sporting events and this announcement of host towns for Yorkshire 2019 is another exciting step on the road to the World Championships.”

“We are absolutely thrilled that Leeds is proposed to be a start location for the 2019 UCI Road World Championships. Hosting such a prestigious global event with the world’s finest cyclists again coming to our city to compete would be fantastic for Leeds, generating a similar level of public excitement as for the unforgettable Grand Départ of the Tour de France in 2014.

“The success of that event, followed by the Tour de Yorkshire and World Triathlon Series Leeds, has put Leeds and Yorkshire firmly on the world sporting map as being the perfect location to stage major international events. We look forward to seeing these exciting plans develop in the months to come.”