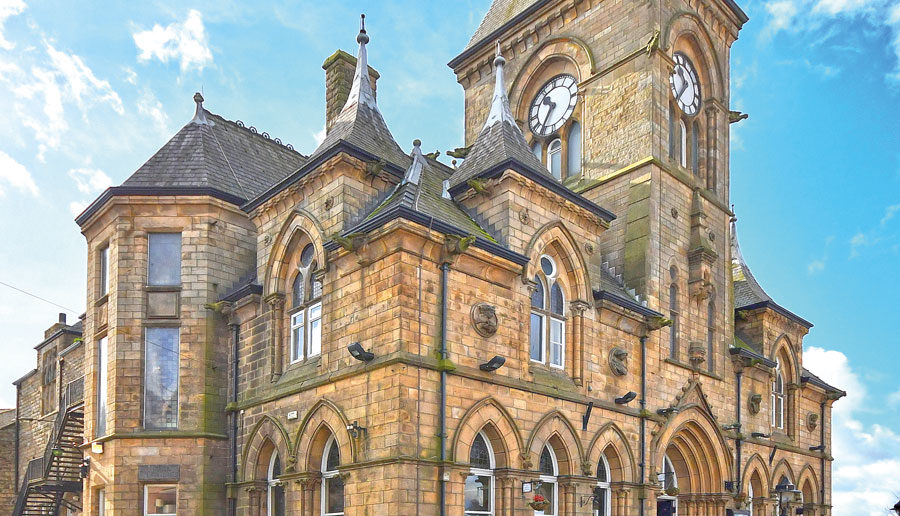 Yeadon Town Hall Given A New Lease Of Life

140-year-old Yeadon Town Hall is beginning a new chapter after being saved by the local community. A group of like-minded people came together to form the Yeadon Town Hall Community Interest Company (CIC) with the main intention of bringing the building back to its former glory.

It was clear that Yeadon Town Hall could no longer continue operating as it had previously. The main auditorium was being underutilised and there was a clear opportunity to revitalise the entertainment offering for the local community. Both the exterior and interior need extensive restoration to allow it to compete with other arts venues in the area. Plans for restoration include a full redecoration, as well as the refurbishment of the kitchen and bathroom facilities.

The creation of a new modern bar area, now branded as the Town Hall Tavern, complete with professional standard stage equipment has already been completed with the space transformed into a bright, airy and inviting space for relaxing during show intervals and also to hold smaller events.

The future is certainly looking bright with an exciting programme of shows being organised too. On 25th May Voodoo Room play, celebrating the musical genius of Jimi Hendrix, Eric Clapton and Cream. The 13th, 14th and 15th June are three nights of The Carole King Songbook, a two-hour adventure exploring her fascinating musical journey. Total 80’s – A Celebration of a Generation is on the 22nd June, and there is much more to come!

Jamie Hudson, local businessman and Director of Yeadon Town Hall CIC said, “When the Town Hall first opened back in the late 1800’s, there was great excitement about the future use of the building and its positive impact on the community. We’ll thoroughly look after Yeadon Town Hall and ensure the local landmark is well-used and much-loved.”

The group has received significant funding but there is still a lot of money to be raised to complete the restoration work. Members of the community are being encouraged to purchase a plaque for the ‘Wall of Fame’ and all charitable donations to the non-profit organisation are gratefully received.

To find out more about what’s on and the restoration project visit www.yeadontownhall.co.uk