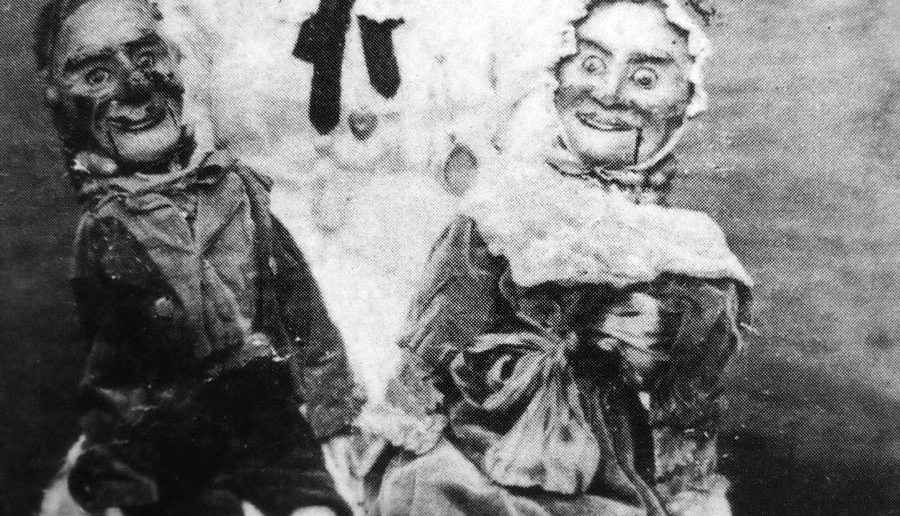 Before American Shari Lewis and ‘Lambchop’ became famous, Yorkshire had its own female ventriloquist, ‘Wynne de Lyle’ who at the age of ten began to follow in her father’s footsteps ‘treading the boards.’ She began to entertain friends with what she called ‘Talking Dolls’ borrowed from her father. Her performance was a success and her teacher gave her tuppence and asked her if she might perform to more children. A few days later, and as it was approaching Christmas, she gave her first public concert along with her father at St Mary’s school in Sheffield. Afterwards, ‘Santa’ gave her a doll and half-a-crown which at that time seemed a lot of money. Unbeknown to Wynne, the money had been donated by her father. He was so proud of her and wanted to encourage her to keep up the good work.

Wynne was born, Winifred Fox in Sheffield in 1903 daughter of George Fox, a conjuror and Punch and Judy man and ventriloquist whose other interests included photography and film making. Always fascinated with magic he became skilled enough at aged fourteen to put on a show.

George Fox enjoyed working on the stage and began to look for a ‘catchier’ name for his act and happened to see a tin of Lyles Golden Syrup. Liking the name, he became ‘Professor de Lyle’ having added the ‘de’ to give a touch of class. During his career he entertained at parties, schools, hospitals and even at Chatsworth House for the Duke and Duchess of Devonshire. George’s day job was in printing but this began to fail by 1908 when in his late thirties and he decided to go into the grocery business, becoming under manager for the Co-Op, keeping up his show-business act, but dropping the ventriloquist part of it leaving it to Wynne.

His ‘magical’ daughter’ Wynne, as she became known early on, showed a talent for writing and performing. In the garden of their home in Sheffield she put on concerts with her sisters and brother. One of the acts was called ‘Little Miss Baggy Britches’ with her sisters doing a song and dance routine. The money they charged the neighbours to see the shows went to charity.

At the age of eleven, Wynne’s father entered her in a talent contest at the Tivoli theatre in Sheffield, billing her as ‘The Little Schoolgirl Ventriloquist.’ The contest attracted acts from within a fifty-mile radius of Sheffield including several ventriloquists. Wynne came second in the contest being beaten by a fourteen-year old comedian, however, she got two free tickets for the Tivoli theatre for a whole year as a prize.

Quite often there were offers from show-business people to put her on stage as a professional, but these were turned down by her parents. The ‘Great War’ broke out and Wynne and her father brought some cheer to wounded soldiers. The two dolls she had used were redressed and renamed ‘Tommy Atkins’ and ‘Sister Susie’ and on Christmas day 1916 she performed at six different hospitals, including Sheffield’s Great Northern Hospital.

At the age of fourteen she started work at the Sheffield and Eccleshall Co-operative Wholesale Society where her father was employed. With her skills as a ventriloquist she could be mischievous, and on several occasions the head of the department she worked in would hear his name called but couldn’t find where the voice was coming from. Eventually, after hearing sounds of laughter outside his office, he found Wynne sat on the counter talking to a brush she was using as a makeshift doll. Her audience were laughing and he asked what was going on. Nobody spoke, and Wynne and her audience just melted away back to work.

Offers of work began to come in for her to tour with her act, and she left the Co-op and began to use the professional name, Wynne De Lyle. She worked in Lincolnshire, East Anglia and also other music halls, and became a member of the International Brotherhood of Ventriloquists and the Variety Artists Federation. During the Second World War, she dressed her doll ‘Jimmie’ in a R.A.F uniform and on stage she would have ‘Jimmie’ float down to the stage much to the amusement of the audience, attached to a parachute, with Wynne herself wearing a W.A.A.F uniform.

When V.J day came along, she and her father entertained at a party. Wynne’s father had a special party piece where he would take pictures of Hitler and Mussolini, scrunch them up and then re-open them to reveal a picture of Winston Churchill. One can only wonder what Hitler and Mussolini would have said had they known about their transformation into the British Prime Minister!

Not long after the end of the war, Wynne met Herbert Arthur Weller, a widower who was also in the show-business world, and they married in July  1946 at the Congregational Chapel on Cemetery Road in Sheffield. The marriage was to be tragically short, lasting only seven years. In June 1953 whilst on her way to Coventry to be with relatives to celebrate the Coronation of the Queen, Wynne was involved in a car accident at Hockcliffe near Dunstable in Bedfordshire and was killed.

She was only forty-nine. The accident was caused by the reckless driving of some American servicemen who were stationed over here. Her husband and her mother survived the crash but were badly injured. Herbert was much traumatised by Wynne’s death, this being the second wife to die leaving him a widower once again. The world of British entertainment lost a unique performer in the world of ventriloquism when Wynne De Lyle died, leaving a gap that could never be filled.