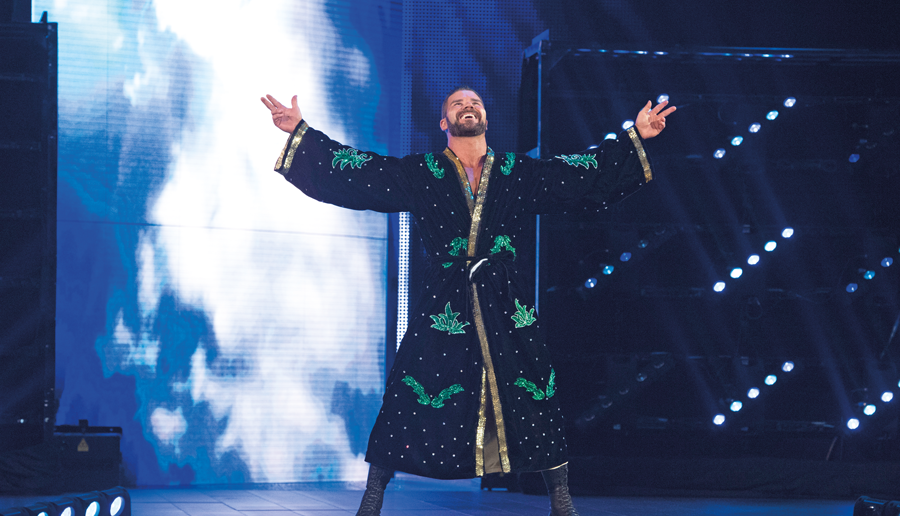 ■ Bobby Roode, WWE NXT Champion, will be putting on a GLORIOUS performance on 7 June at the Leeds First Direct Arena
Other Sports

WWE NXT COMES TO LEEDS FOR THE FIRST TIME EVER

By yorkshire reporter on 03/05/2017 0 Comments
■ Bobby Roode, WWE NXT Champion, will be putting on a GLORIOUS performance on 7 June at the Leeds First Direct Arena

WWE’s famed developmental brand NXT makes its way to First Direct Arena for its first ever show in Leeds this June.

One of the most talked about brands in sports entertainment comes across the pond, as WWE NXT returns to the UK for a hugely anticipated tour. The NXT Superstars will tear the house down at First Direct Arena on Wednesday 7th June 2017, before moving onto a weekend at Download Festival.

It’s the latest in a string of WWE Live events to come to the city in recent years, with superstars from Raw and SmackDown making appearances at the arena for the last three years running. But this is NXT’s long awaited debut in Leeds, for what’s bound to be a sell-out show.

WWE NXT has become one of the hottest properties in sports entertainment over the past few years, and the chance to see its rising superstars tear it up at Leeds First Direct Arena is something no wrestling fan should pass up, whether young or old.

I was thrilled to speak to current NXT Champion Bobby Roode in an exclusive interview about his upcoming visit to Leeds and his career in wrestling.

During his 18yr career in professional wrestling, Bobby Roode has been to the UK many times and loves to perform here. He told me “Wrestling in the UK has a different feel for sure. In the US, we are able to perform every week, so when we have the opportunity to travel to other places and perform outside of the US it’s always very special, the fans are very unique and very passionate, they look forward to us coming there as much as we look forward to going so we always seem to give a little extra in our performances and the fans seem to respond really well to it. I know I always look forward to coming to the UK and I am excited to be performing in Leeds for the fans in June.”

He added “When NXT hits Leeds this June it’s gonna be glorious. As NXT Champion, I look forward to defending my title there, of course there will be other NXT superstars, a lot of familiar names and faces who the fans see every Wednesday night on the WWE Network. I know that we are eager to get there and excited for the tour. Leeds is gonna be a great venue.”

The UK was the place where, almost a year ago, Bobby made his surprise wrestling debut in the NXT at Download Festival after first appearing in the crowd during a show in Dallas to give fans a hint he may be joining the company. He said “The UK is a special place to me as it was where I made my NXT debut. It will be pretty much exactly a year when I return, and it’s great to return as a champion.”

I also spoke to Bobby about his long career in wrestling and asked him how he first got involved in the sport. He told me “Growing up in Canada, I was always very passionate about hockey, but was a huge wrestling fan as a kid, watching the WWF which of course is the WWE now. Around the time I was 19yrs old I started training and it has brought me to the WWE which I couldn’t be happier about. Growing up, being Canadian I loved Brett Hart. I also became a huge fan of Kurt Henning, Rick Flare and Rick Rude, I studied those sorts of guys, and there are a lot of names who have inspired be to become who I am today.”

He continued “Throughout my career, I have had numerous matches that are really close to my heart and I’ve really liked, Eric Young who you will see in Leeds, AJ Styles who I have had some incredible matches with, Kurt Angle is another guy, so you know, they were all matches that have happened in the past but I am equally looking forward to seeing what the future holds.”

The near future of course includes his upcoming visit to Leeds. Before the end of our conversation, I asked Bobby if he had a final message for all the wrestling fans here in the city. He said, “NXT is coming to Leeds and your glorious world champion will be there, and if one thing is for sure – LEEDS WILL BE GLORIOUS!”

To see Bobby and the other WWE NXT Superstars perform at First Direct Arena on the 7th June, tickets can be purchased at
www.firstdirectarena.co.uk as well as other online ticket retailers.