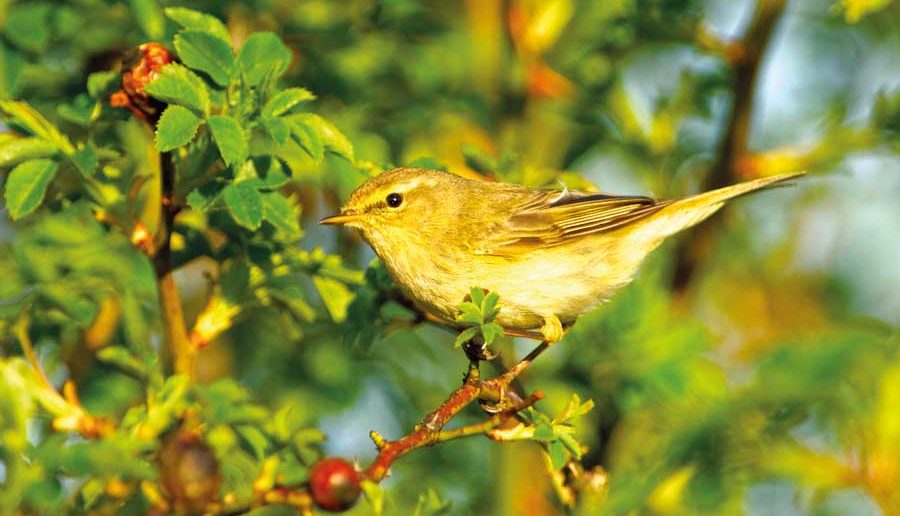 Sunny days during May and June are a great for listening to warbler songs. Many are perched out in the open and some are performing display flights. Here are some simplified tips to help you identify a few common warblers by their song.

These are small, sleek, yellowish birds that sit close to the tops of trees. As a general rule, chiffchaffs prefer tall trees and willow warblers like smaller trees in a more open habitat. Chiffchaff has a stuttering single-noted ‘tut, tut, tut, tut’ song, while the willow warbler has a sweet, high-pitched, downward cascade of notes, like a waterfall. Both these birds sing out in the open.

These birds like thickets and bushes. Their songs are very similar but with practise you’ll be able to split them. Blackcap starts off scratchy then turns very loud and fluty, like a blackbird song played at high speed. Garden warblers, on the other hand, tend to stay hidden. The song sounds similar to blackcap in that it starts off scratchy, but it remains so and babbles for a lengthy period before stopping. Both these birds can be found in reedbeds but, while reed warbler is more of a reed specialist, sedge warbler is also attracted to marshy areas with low growing bushes. Reed warbler is skulky with a hoarse, rhythmical song, like a metronome. It starts off with a quiet and lengthy ‘trett, trett, trett, tirri, tirri, tirri’ occasionally picking up speed, then returning to the same rhythm. Sedge warbler is showy and can often be seen performing a song flight. Its song starts off with a buzzy outburst then settles to a bit of a rhythm interspersed with lots of trills and whistles, like a jazzed-up version of the reed warbler.

The whitethroat is a showy bird that likes hedgerows and bramble stands. It has a very short, scratchy song and tends to perch out in the open. It performs longer song flights as part of its display. Its cousin, the lesser whitethroat is usually hidden. The audible part of its song sounds like the ‘de de de de de’ of a machine gun.

This bird likes nettle stands, and brambles with small saplings. It is very hard to see. It sounds like a fishing line reeling in, or like a cicada – buzzy and clicky. The song can last for a long time and can sound as if it is drifting away and coming back. This is because the bird turns its head from side to side while singing.

I hope this helps you over the next few weeks.

Finally, the 4th Leeds Birdfair takes place on Saturday 22nd June from 9:30am to 4pm. Celebrate the wonderful wildlife and green spaces of Leeds at the award winning Rodley Nature Reserve and meet the conservation organisations, Friends Groups and wildlife businesses that operate in and around Leeds. I’ll be running a birdsong walk and there will be lots of other events for adults and children. Find out more on;