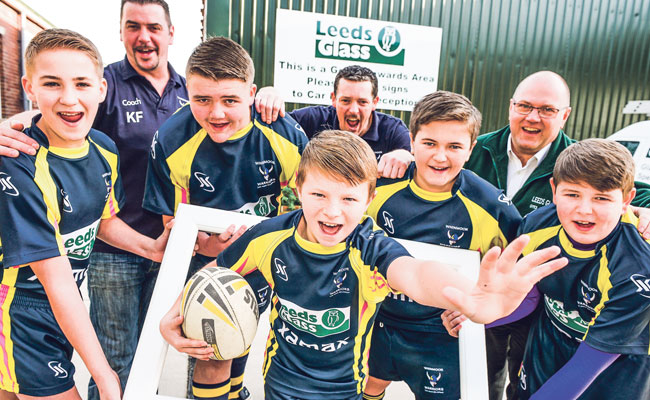 Chair of the Warriors Club, Sue Gumbs says recent off-field improvements to the club’s facilities have led to success on the field – with both the club’s U12 and U15 teams winning their leagues.

“Without a doubt we’ve some players in our junior teams right now who’ll make it to Super League in years to come!”

Steve Green, himself a player with Wakefield Trinity in past years, says the Leeds Glass Community Fund has helped a number of local initiatives over the years: –

“We’re a Leeds company, established here for over 40 years so whenever we are able – and when budgets permit – we are happy to contribute to community initiatives. We look forward to seeing Whinmoor Warriors’ teams reigning supreme in their leagues!”

“Sponsors often have connections with the club through kids or grand-kids but we’ve been lucky this season to attract sponsorship from companies such as Leeds Glass who don’t have this direct connection. It’s great to have a company with their established reputation on board to sponsor our league-winning under12s.

We can’t thank them and all our sponsors enough for their valuable support!”