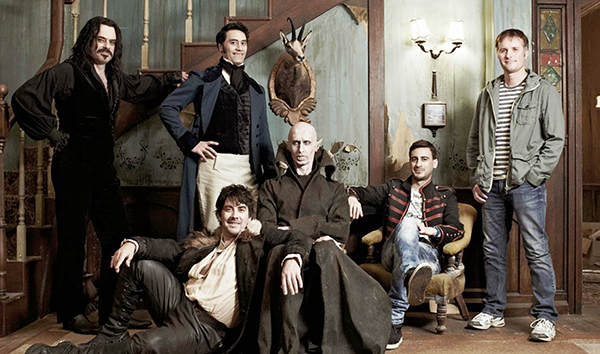 What We Do in the Shadows was voted by Leeds 2014 audiences as overall favourite in a year in which Leeds International Film Festival’s programme has received its highest ever overall rating from audiences. X+Y, starring Asa Butterfield and Sally Hawkins, came second and lead the festival’s largest ever programme of films produced in Yorkshire. The vote was incredibly close for the top five films, and the top 20 winners in the LIFF28 Audience Award for Best Film are: 1) What We Do in the Shadows 2) X+Y 3) Song of the Sea 4) The Possibilities are Endless 5) The Imitation Game 6) Heaven Adores You 7) Giovanni’s Island 8) Seventh Heaven 9) Housebound 10) Birdman 11) Poverty Inc 12) Brasil Bam Bam Bam 13) Testament of Youth 14) Everybody Street 15) Kingdom of Dreams and Madness 16) Vessel 17) No One’s Child 18) Rurouni Kenshin 2 19) The House at the End of Time 20) #chicagoGirl – The Social Network.

What We Do in the Shadows is distributed by Metrodome Group, and will now receive a full release at Everyman Cinemas following its popularity at LIFF28. Viago, Deacon, Vladislav and Peter are four vampires sharing a house in Wellington, trying to balance being undead with everyday problems like whose turn it is to wash up, where to find the best blood and how to dress for a night out when you don’t have a reflection. As a documentary film crew follows them round we learn about each of their histories and what it means to be hundreds of years old in the 21st century. Co-written and starring Jemaine Clement from Flight of the Conchords, What We Do in the Shadows balances comedy, horror and social commentary perfectly in this hilarious film.

“The Leeds International Film Festival continues to be a significant event in the city’s calendar. Having an Oscar-qualifying festival in the city is something we should be hugely proud of, and this year’s event, which attracted a record audience of 40,000 people, was one of the biggest and best yet.”

For a full list of the winners please visit www.leedsfilm.com/news/winning-short-films-28th-leeds-international-film-festival/