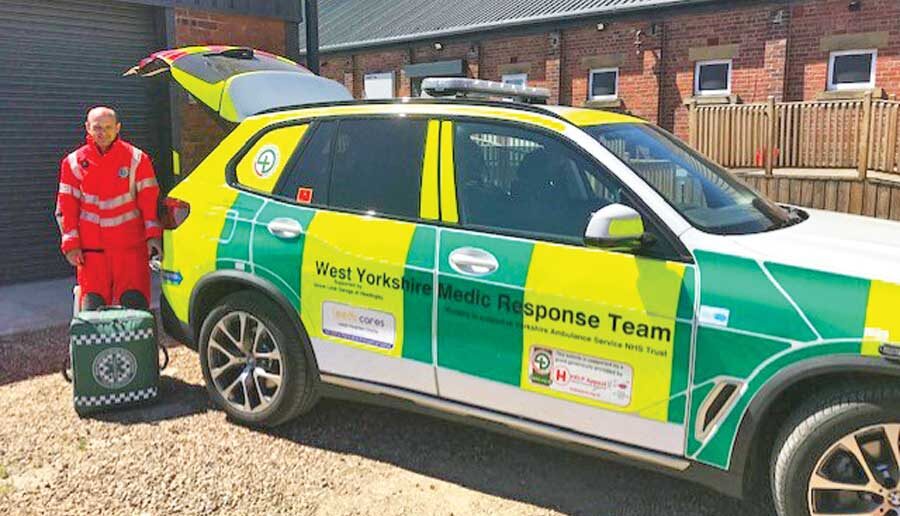 It was made possible after the group successfully bid for a total of £41,220 from a pot of £250,000, which is given to the British Association for Immediate Care every year by the County Air Ambulance HELP Appeal – the only charity in the country dedicated to funding NHS hospital helipads.

The BMW, which has been converted with blue lights, sirens, navigation technology and cameras will now be active across Leeds, West Yorkshire and beyond, carrying volunteer medical teams, consisting of senior doctors and paramedics, to the scene of critically ill or injured patients in the community or at the roadside. This new car replaces a Volvo XC70, which has been in use since 2013.

WYMRT is one of a network of schemes across the UK, which operates under the umbrella of the British Association for Immediate Care – a national organisation. It currently has 35 active responders, including 15 trainees, who were dispatched 266 times last year. Of these, 159 were active jobs, with WYMRT being first on the scene in a quarter of these cases. The key reasons for call outs were, road traffic accidents (77 cases), long falls (19 cases), stabbings (14 cases) and cardiac arrest (13 cases).

In December 2020, after the County Air Ambulance HELP Appeal’s presented its second annual £250,000 donation to the British Association for Immediate Care, WYMRT was also successful in securing an additional £15,369.55. This has enabled them to buy ten new PPE uniforms, equip its garage base with laundry facilities to wash uniforms after every incident, purchase new crew responder helmets and also winter tyres for existing responder vehicles.

WYMRT Chair, Dr Andy Pountney said: “The support given to WYMRT by the HELP Appeal has been tremendous and many patients in West Yorkshire have received this valuable specialist care and attention by Doctors at scene. The work has also helped both Doctors and Paramedics to understand the important roles played by each other in this type of work.”

Robert Bertram, Chief Executive of the County Air Ambulance HELP Appeal added: “These volunteers are the unsung heroes of emergency care. This important addition to their fleet of cars and new PPE uniforms are in recognition of their lifesaving work – all carried out in their spare time – supporting local ambulance crews faced with hugely complex incidents, where people’s lives are at serious risk. This new car will help these volunteers to reach incidents quickly and safely to help treat patients and give them the best possible chance of survival and recovery.”

The HELP Appeal was created 12 years ago by the County Air Ambulance Trust. It is the only charity in the country dedicated to funding NHS hospital helipads including at Leeds General Infirmary which has state of the art lighting, to enable air ambulance take offs and landings at night and a firefighting system, thanks to a £132,000 donation from the charity.

To date it has funded 45 helipads, which have received over 17,750 landings. The HELP Appeal relies solely on charitable donations and does not receive any government funding or money from the National Lottery.