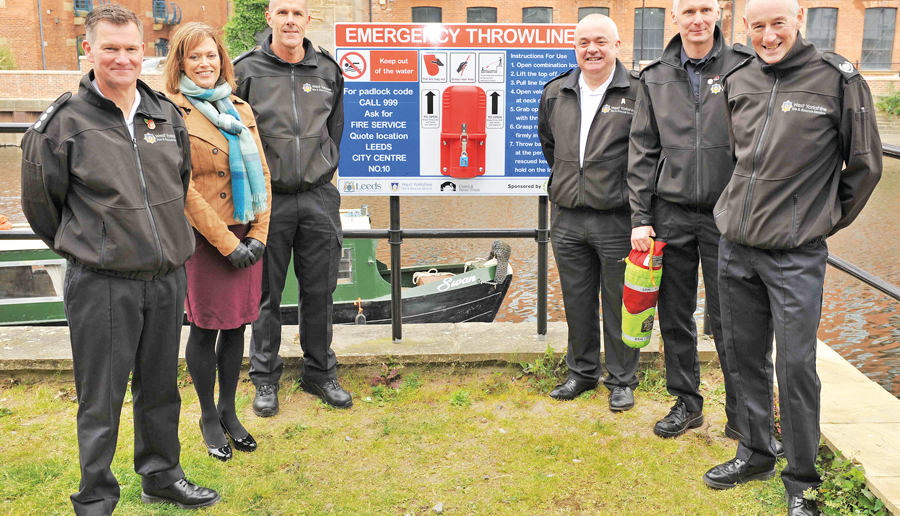 West Yorkshire Fire and Rescue Service (WYFRS) have unveiled their new throwline scheme at an event outside the Royal Armouries in Leeds.

Leeds White watch joined up with partner agencies as well as Jackie Roberts, whose daughter Megan tragically drowned after a night out in 2014, to unveil the new lifesaving equipment and highlight the dangers of drinking alcohol near water.

The new throwline scheme sees water rescue equipment put into place along a mile stretch of the River Aire in Leeds city centre.

The idea for the throwline scheme came from Leeds fire crews as WYFRS sought to increase the survival rate of water rescue casualties prior to the arrival of the fire service.

Leeds City Centre has the highest number of water related incidents in West Yorkshire, with 80 water rescue incidents attended since 2012.

Approximately 33% of all under 30`s have alcohol in their systems when they drown. Knowing how to respond quickly, safely and appropriately can help save lives.

The new scheme will have rescue equipment effectively secured but readily available.

Unlike the life rings currently in place, the throwlines will be secured in a lock box. On discovering an individual in the water, members of the public should follow the simple instructions on the marker board.

The marker boards give an accurate location so responding crews know exactly where to attend.

District Commander for Leeds, Russ Hepton, said: “These throwlines will enable “would be” rescuers to act whilst removing the temptation to enter the water, thus significantly reducing risk and preventing further casualties being in the water as crews arrive.

“WYFRS are committed to eliminating deaths by drowning in Leeds City Centre and we will work tirelessly with our partners to achieve this challenging goal.”