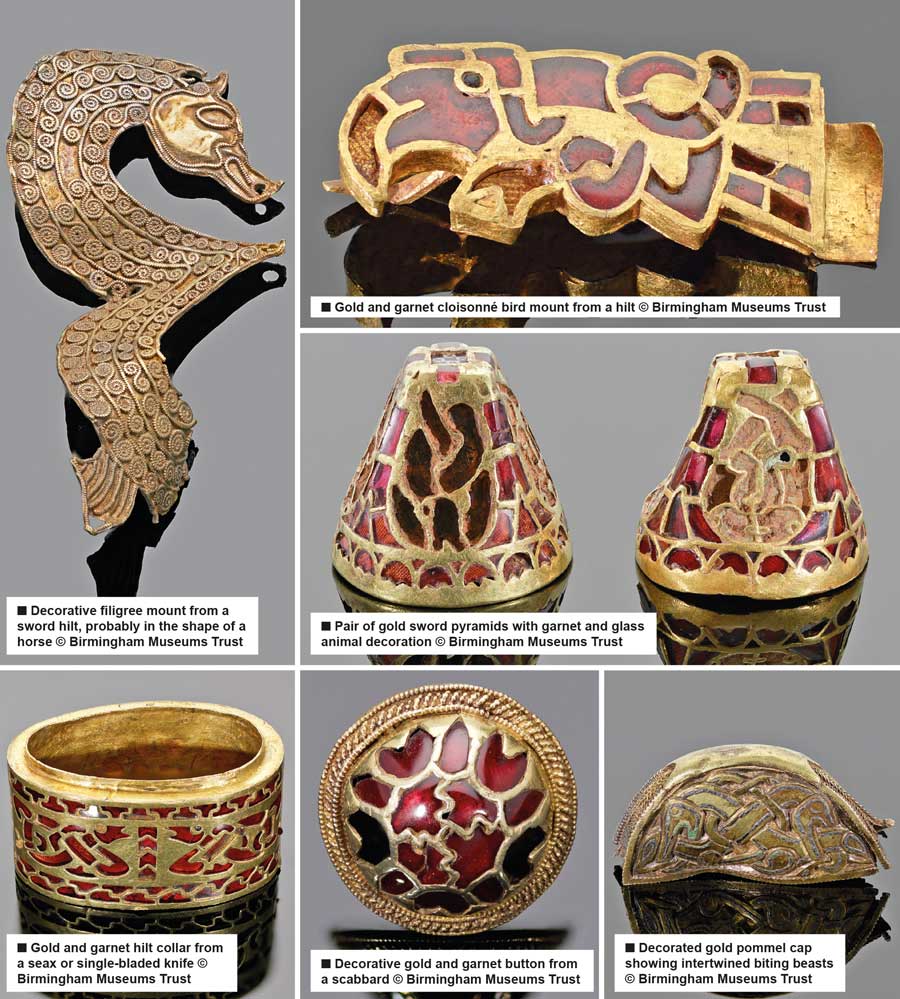 I’m sure that many of our readers will have heard of the Staffordshire Hoard found in July 2009 – the largest hoard of Anglo-Saxon gold ever found. Made up of around 4000 different fragments and weighing in at over 6kg, the collection is both interesting and beautiful, and now many of the objects from it can be seen at the Royal Armouries until 2nd October.The new exhibition showcases around 100 spectacular items and it is the first time that people are able to view some of the collection outside of the West Midlands where it was discovered. There are also some objects on display that have never been shown before. The majority of the hoard was made up of fittings from weapons, and this is the focus of the Warrior Treasures Exhibition. Providing a fascinating glimpse into the warrior culture of a period in Anglo-Saxon history, the fittings have been stripped from swords and seaxes and possibly represent the equipment of defeated armies during the first half of the seventh century. Intricately decorated, the fittings of gold, silver and semiprecious gems represent the incredible quality of craftsmanship from this time period.
The hoard’s objects, despite being fragmented and damaged, show the possessions of an elite warrior class. It was discovered close to a major routeway (Roman Watling Street) which was at that time in the emerging kingdom of Mercia, but we do not know why it was all buried.
Along with the Staffordshire Hoard, the exhibition also includes the Wollaston Warrior group. These items are Anglo-Saxon burial goods from the grave of an elite warrior, probably from the late 7th century. Included in this collection is an exceptionally rare helmet which shows the high status of its owner.
Henry Yallop, Royal Armouries lead curator for the exhibition and expert in edged weapons said “The Royal Armouries, as the home to the national collection for arms and armour, is delighted to welcome the items from this magnificent hoard for the Warrior Treasures exhibition. These parts of weapons are exquisitely crafted and it is no surprise that the story of the Staffordshire Hoard has captured the public’s imagination. Seeing the outstanding quality of these objects really brings to life the important role that high status weapons such as swords played in Anglo-Saxon society. The research and conservation into it continues to provide fascinating glimpses into the warrior culture of the seventh century.”
I went to visit the exhibition and thought it was very well presented. Towards the back of the room there is a Saxon mead hall which adds to the atmosphere. It is truly fascinating to see and well worth a visit.
Entry to the exhibition is free, and there are also events running alongside such as Saxon Saturdays craft workshops. For more information, visit their website www.royalarmouries.org