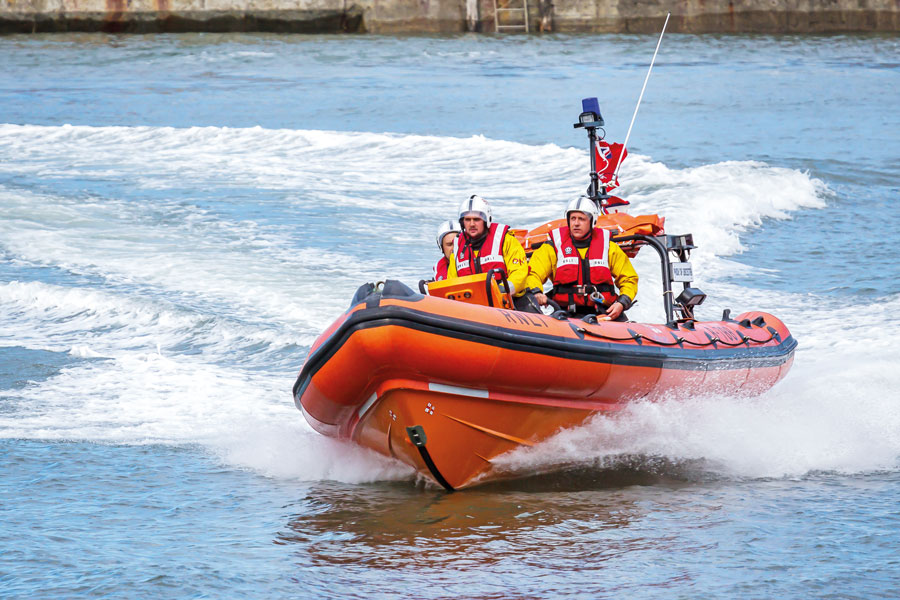 In Yorkshire we are truly blessed with beautiful scenery – from the moors, dales and Pennines to the Yorkshire coast there are plenty of places to get out and about walking, visiting towns or the seaside and just generally enjoying a little leisure time outdoors. However, these places all come with their own challenges and risks – the weather can quickly change in the remote hills, people can have an accident and become injured, or find themselves stranded at the coast surrounded by water. Throughout the county, as in the rest of the UK we have some very special individuals who come together to save people who have got into difficulties in many different situations. These rescue groups do not get paid for what they do, they all help out on a volunteer basis, saving the lives of others every day. They are on call 24hrs a day and on some occasions find themselves in very dangerous situations, however, due to their high level of specialist training and team work they are able to look after each other and successfully rescue many people.
I caught up with some of these ‘unsung heroes’ from just a few of the volunteer organisations in our region who show true Yorkshire grit to find out more about them.
MOUNTAIN RESCUE ORGANISATION
The Mountain Rescue Organisation were formed by 1950 when over the preceding few decades, walking and mountaineering had become increasingly popular and it was found that rescues from remote and hilly places were becoming more frequent. The name suggests that this group spend their time rescuing individuals from mountain tops. While they certainly do this, it is not the majority of the work they do.
Ian Hugill from Scarborough and Ryedale Mountain Rescue team told me what volunteering with the team actually entails. Ian has been part of the team for 18 years now and said “it is not just mountains – far from it! We get involved in a lot of searches for vulnerable people who have gone missing and a common call out for us is to rescue mountain bikers from Dalby Forest who are injured following an accident. They may be in an awkward location down a steep bank for example with broken bones. It is our job to safely stretcher them out to where the ambulance is waiting to transport them to hospital.” When there are larger scale incidents, or rescues on the borders between team remits, teams from other areas of the county all work together. For example, all teams worked to rescue people from their homes during the York floods earlier this year. Ian joined the team as he had always been involved in outdoor pursuits such as walking, climbing, skiing and canoeing. He feels that being part of the team is a good way to ‘give something back’ and put his skills to good use. There is also a fantastic community spirit within the group.
New volunteers to the Mountain Rescue organisation receive extensive training before they are allowed to go out. As most of the volunteers work full time, training takes place on an evening and weekends. It takes approximately 12-18mths to get people fully trained and active depending on how much time they can dedicate to their training. There are fully qualified doctors and paramedics who volunteer on the team but everyone receives training in casualty care in order to be able to respond to patient needs such as hypothermia etc. They are also trained in navigation skills, how to exist on the hills and in exposed environments and response driving. Much of the driving done by Mountain Rescue operatives is using 4×4 vehicles on tricky and uneven terrain. They also work closely with the Cave Rescue Organisation.
CAVE RESCUE ORGANISATION
The Cave Rescue Organisation are affiliated with the Mountain Rescue Organisation. The CRO were originally formed in 1935 and have been saving lives above and below ground ever since in the Yorkshire Dales, North Lancashire and South East Cumbria. It is believed to be the longest existing Cave Rescue organisation worldwide! Peter Maxwell joined the organisation when he moved into the area. He enjoyed the outdoors and says it is a good way to give something back to the way of life he enjoys. Peter’s branch is based in the Dales village of Clapham, and they currently have 60 active team members who are all working in a wide variety of careers as well as volunteering in their spare time. The team members all live locally to the area they serve so that they are able to get out quickly in emergency situations. They are First Aid qualified through the Mountain Rescue England & Wales Organisation and are trained in casualty care, rope skills, navigation and radio. They also have to pass a practical test in White Scar Caves as well as a written exam before they are allowed to become an operational team member.
Like the Mountain Rescue Team, the CRO do not just carry out rescues from caves. Peter says “We mostly deal with walkers who are lost or injured, climbers and searches for missing people. We do a lot of rescues from fast flowing rivers – people canoeing who have got into difficulties, as well as assisting people who have become injured or trapped in our cave systems.”

RNLI
The Royal National Lifeboat Institution (RNLI) was founded in 1824 by Sir William Hillary. There are 237 operational lifeboat stations around the UK and Republic of Ireland. RNLI is a charity that saves lives at sea and since founded in 1824 over 141,000 people have been rescued. Volunteer crews provide 24 hr search and rescue cover. RNLI also has specialist flood rescue teams who operate in the UK and abroad.
The RNLI’s volunteer crews at the nine lifeboat stations along the Yorkshire coast rescue between 250 and 300 people every year, while the charity’s lifeguards on 14 of the region’s busiest beaches help hundreds more during the peak holiday season.
Andy Brompton, Bridlington RNLI’s Volunteer Deputy Launching Authority, says “Every RNLI call-out is different and the crew don’t know if they’ll be rescuing a fisherman, a swimmer, a stricken boat crew or a family cut off by the tide. Our intensive training equips us to deal with a multitude of situations and it’s very rewarding to reunite people with their loved ones.
“We are hugely grateful for the vital lifeline from our supporters, as 92% of the RNLI‘s income comes from donations and legacies. This funding ensures that we can continue saving lives at sea.”
As well as its lifesaving work the charity runs many educational programmes to help young people stay safe near water. This summer the Swim Safe programme is at Scarborough between 15 – 19 August.
Delivered in partnership with the ASA (Amateur Swimming Association), Swim Safe offers practical, interactive, educational and fun water safety workshops to children aged between seven and fourteen. Parents can book their children onto a Swim Safe session in advance at www.Swimming.org/SwimSafe

MARITIME & COASTGUARD AGENCY
The Coastguards are another organisation that completely relies on volunteers. They were originally established in the 18th century to stave off the rampant smuggling trade, but over the years their role changed and adapted until it became the rescue service we know today.
Rob Bennett is a part of the Bridlington Coastguard Rescue Team. In Bridlington, Rob and the rest of the team of volunteers deal with a lot of cliff rescues. It took him 4 ½ years to get his cliff technician competency to enable him to assist people who have fallen off cliffs. Although they do not generally rescue animals, Rob says they do rescue dogs from cliffs too “We rescue dogs to stop owners climbing down for their beloved pets. What happens is they climb down and become stuck too. We try to prevent that scenario happening. It is best to keep your dog on a lead near cliffs as they may try to chase seagulls for example and then go over the edge.” The Coastguard also do a lot of handovers from the lifeboats – transferring casualties from the boats to waiting ambulances on land. Another common type of call that the Coastguard respond to is what’s called a ‘snatch rescue’. They are able to go into the water up to 65m from land on a line to rescue people who may have become stranded by fast incoming tides. Rob says he has never been scared for his own safety, as the level of training they do, combined with the top quality equipment used and the fact that all the team look out for each other’s safety makes them all feel confident and secure. He does get worried for other people though “sometimes you look at people in certain situations and you feel scared for them. You think, please don’t get tired and let go – hang on until we can get to you.” All the various rescue organisations of course unfortunately have to deal with fatalities too. Rob says “You try not to dwell on it. You treat the person with respect and dignity when recovering them but you have to try and deal with it like you would a normal casualty. If you start thinking ‘that is someone’s Dad’ for example it would just get too hard to cope with. As an organisation, we do have counselling available to us should we get too upset or depressed with things though.”
David Bayford, Senior Coastal Operations Officer for UK Coastguard said: ‘It takes a special kind of person to volunteer as a Coastguard. They come from all parts of the community but all have a shared trust in each other. We trust our team mates in what they do and in turn that helps the community trust us to carry out these life-saving rescues.
‘But we do need more people on our teams. It could be you helping to save a life or reuniting someone with their family. We’re looking for people across an area stretching from North Yorkshire and Lincolnshire.”
If you are interested in volunteering with any of these organisations you can visit their websites for further information;
Mountain Rescue Organisation: www.mountain.rescue.org.uk
Cave Rescue Organisation: www.cro.org.uk
RNLI: RNLI.org.uk
Maritime & Coastguard Agency: www.gov.uk/government/organisations/maritime-and-coastguard-agency or email area6@mcga.gov.uk to find out more about how to volunteer.
Here at the Yorkshire Reporter we think all the volunteers in rescue organisations do a fantastic job day in day out that they can never be thanked enough for. Without their selfless acts there are many people who would not be here today. We wish them all well for the future and long may they continue in their vital work.