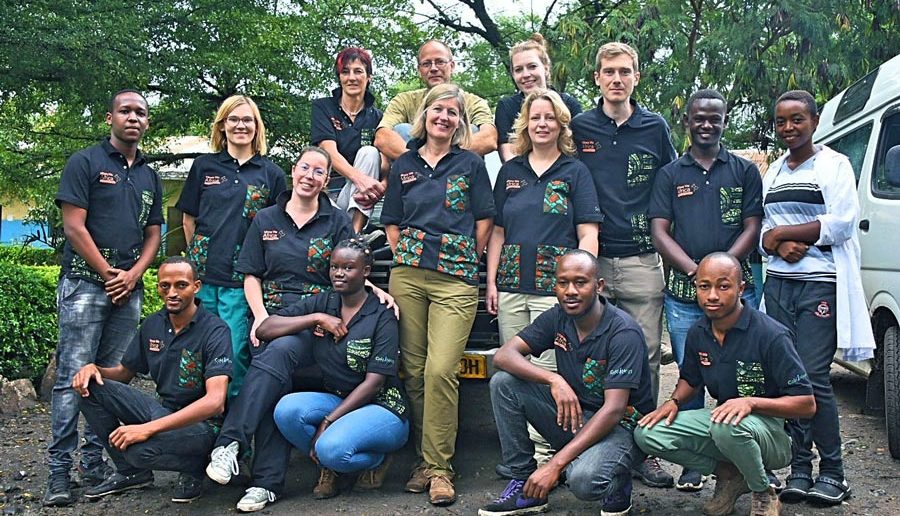 By yorkshire reporter on 22/04/2020 0 Comments
Paragon Veterinary Referrals’ Ben Safrany (back row, third from right) with the Mbwa Wa Africa team in Tanzania

A Yorkshire referral vet has completed his third “life-changing” trip to Tanzania to help dozens of volunteers tackle the country’s huge rabies problem. Ben Safrany at work in Tanzania

Working alongside a team of vets, nurses and local staff, Ben’s job was to sterilise and vaccinate as many animals as possible each day, travelling with equipment in the back of a Land Rover and a minivan and setting up temporary clinics in primary schools, shops and government buildings.

Long days often finished after dark, working by torch light, while he faced other challenges such as a lack of available medication and having to use patio furniture as a makeshift operating table.

Mbwa wa Africa is run by Sandra Kliegelhoefer and Jens Fissenebert, both originally from Germany, on an entirely voluntary basis and provides free neutering programmes and emergency vet treatment. Ben said: “Rabies is a huge issue in Tanzania and is predominantly spread by dog or cat bites or scratches.

“I feel like the work we do in Tanzania is really valuable and makes a difference to the welfare of people and animals. I get to meet the amazing people who run the charities and to work with people from a range of backgrounds.

“The local staff were amazing, they worked so hard and made us feel really welcome. It was great to get to know some of them and to live and work with them.

“Sometimes we had to improvise the way we diagnose or treat conditions because the diagnostics or medication available were limited. But these felt like challenges rather than problems. We did the best we could with what we had.”

The daily challenges Ben and the team faced were practical ones, such as finding places to set up the clinic; getting lost and, on one day, getting their vehicle stuck in the mud. The team’s vehicle gets stuck in the mud

He said there was a “huge difference” between the facilities he worked with in Tanzania, compared to what he is used to at Paragon.

He said: “I’m incredibly lucky to work in a £5 million referral hospital with all the tests and equipment I need. In Tanzania, I was working on patio furniture, with no blood tests, X-rays, ultrasound or gas anaesthetics. Plus, a lot of medication is unavailable in Tanzania.

“There are sometimes different attitudes to animal welfare, which can be hard but fortunately most dog owners in Tanzania love their pets the same way people do at home.

“A lot of local people don’t have access to a vet at all. So, us being in town could be some people’s only chance to get help for their pet. The local population bringing pets in to be seen

“However, I was actually surprised by how high the standards were. All dogs got an IV, intraoperative fluids, local anaesthetic blocks and anaesthesia pro tools developed by specialists in the UK.

“I would advise anyone thinking about doing a similar trip to just do it! I’d been thinking of doing something like this for years and it really changed my life.”

For more information on the charities, visit https://mbwa-wa-africa.org or www.missionrabies.com.

For more information on Paragon Veterinary Referrals, visit www.paragonreferrals.co.uk or search for Paragon on LinkedIn or Facebook.