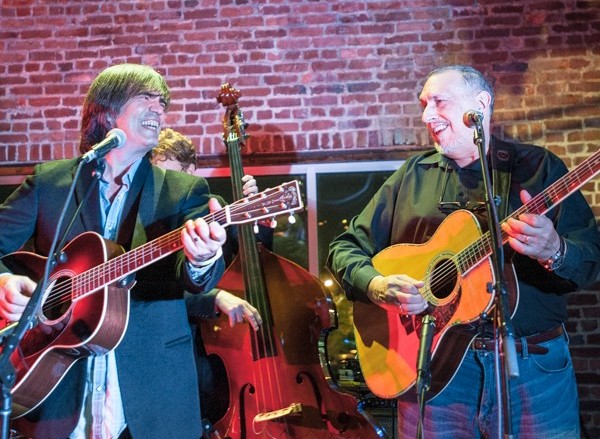 US Music Legends To Appear At Thorner Victory Hall
Entertainment

US Music Legends To Appear At Thorner Victory Hall

Lovers of Americana music are in for a treat at the end of July when two legends of the US music scene appear at Thorner Victory Hall – Larry Campbell and David Bromberg.

In the mid-sixties David Bromberg was working his way through the Greenwich Village coffeehouses in the footsteps of Bob Dylan, John Sebastian, Tom Rush, Dave Van Ronk and others. Bromberg joined up with Jerry Jeff Walker to record the classic “Mr Bojangles” before embarking on a career as a session guitarist for Bob Dylan, Willie Nelson, John Prine, Steve Goodman, Carly Simon and countless others. David’s band was the stuff of legends: a fearless & eclectic group featuring a rhythm section with three horns fiddles & mandolin, constantly changing instrumentation. More recently David has had a resurgence with his Grammy nominated release Try Me One More Time, followed by Use Me (featuring David with Dr John, Los Lobos, Levon Helm, John Hiatt, Keb Mo, Linda Ronstadt, Vince Gill & Widespread Panic) and now Only Slightly Mad, the first David Bromberg Band album in thirty years.

Larry was recruited by Bob Dylan, performing and recording for eight years. Upon his departure from Dylan’s band, Larry became musical director and producer for the Levon Helm Band, resulting in three consecutive Grammy awards. Larry was presented with a Lifetime Achievement Award by the Americana Music Association for his work.

The Victory Hall team feel this is another booking coup, previous acts have included Barbara Dickson and Rab Noakes in April, singer songwriter Steve Forbert in March and the venue has been host to many popular comedians including Alan Carr and Michael McIntyre at their annual Comedy Festival.

Thorner resident Dave Stainthorpe has organised the latest gig, and said. “We’re really lucky to have booked this duo who are making a rare visit to the UK. When they leave Thorner they’ll be appearing at Cambridge Folk Festival. We’ve had a lot of interest from fans across the North of England plus a booking from a fan in Italy! In addition Radio Leeds have arranged an interview with David Bromberg before the show. We’ve had some really good comments from folks who have been in the audience at earlier gigs, praising the friendly and comfortable atmosphere in our newly re-furbished village hall, and we’re gaining quite a reputation as an entertainment venue.”

The event is on Wednesday 30th July at 8-00pm , when the music starts with support act John Butler. Tickets are £17-50, and they can be bought online at www.thornervictoryhall.co.uk/buy-tickets/ or in Leeds from Jumbo records in the St John’s Centre.