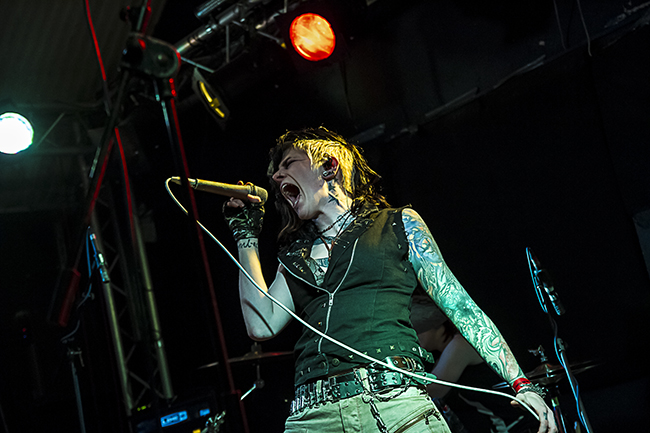 Up And Coming Leeds Band Rocks!

Chasing Dragons, a Leeds rock band, are on the road to stardom.

If you don’t believe me take a listen to their new record, Checkmate, released on June 2nd. It is a flawlessly constructed rock album. Crushing guitars, pumping drums and vocals that will literally shake you from head to toe. I, and anyone who cares to listen will, be immediately hooked. Laurie “Tank” Carnen, has one of the most powerful female vocals I have heard on this side of the Atlantic, indeed, it matches anything on the other side of the Atlantic. Her soaring vocals are ably assisted by the screaming guitars of Mitch Sadler, the thumping bass of Ant Varenne and the ferocious drumming of Kate Bullock. There is no let up in the energy until we reach the penultimate track on the record called The Last Defence, a moody piano led ballad as good as anything delivered by Amy Lee. Ending the album with their new single Broken Jaws, which is an anthem in its construction and delivery. This is a beautifully crafted record: The musicianship is exemplary but the biggest thing about Checkmate is that it has not simply been thrown together. It has been thought about, writing and production wise. It’s a big record in every sense for a band that are about to be big. From this record it is clear they deserve every bit of success that comes their way.

Find out more about Chasing Dragon, including how to order Checkmate at http://www.chasingdragons.co.uk/