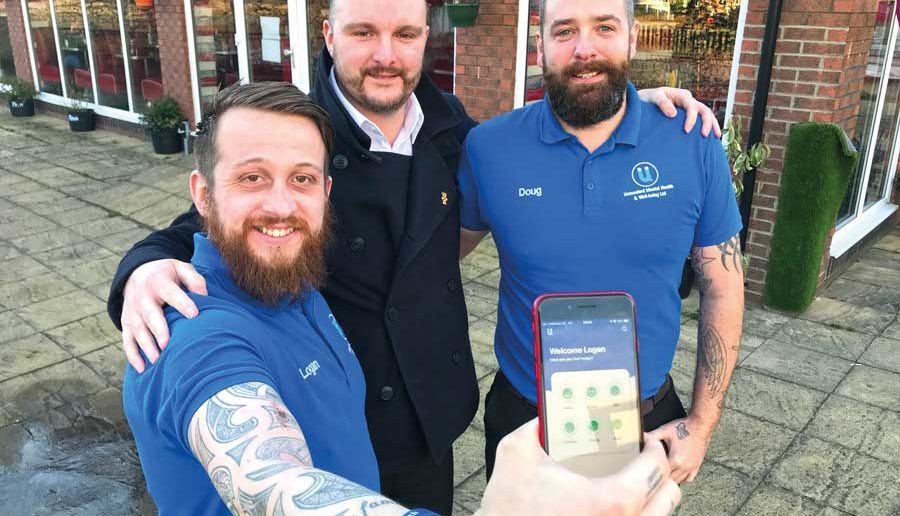 ■ Photo shows Doug, Logan and Chris with the App
Health

‘Unmasked’ App To Bridge The Gap Between Mental Health Services

The UK’s first free peer to peer support App, the brainchild of three Yorkshire men, has been launched in a bid to help people with mental health issues find friendship and support, whatever their state of mind. The ‘Unmasked’ App is designed to enable users to create bonds with people they wouldn’t ordinarily meet, to bridge a gap between appointments with mental health specialists.

Unmasked is a free app, built around research and consultation with a number of mental health charities and agencies in the UK. Users can choose to appear masked (using an emoji to convey their state of mind) or unmasked as themselves.

Doug Dennison (35) and Logan Smith (26) have been friends for over a decade. Both from West Yorkshire, the men each had their own individual reasons for seeking help in the mental health arena, which led to the idea of the Unmasked App.

Doug is from Hebden Bridge and used to work in sales for Ford when tragedy struck his family. Doug and his ex-partner were expecting twins in 2008. Tragically, due to complications during delivery, both babies died in hospital. Just two years later, a similar catastrophic event took place when Doug and another partner lost their child to Edward Syndrome after living just two short hours.

In true, stiff upper lip style, Doug bottled things up for many years before being diagnosed with Post Traumatic Stress Disorder.

Doug said: “The experiences I’ve had have left me with severe mental scarring. I had to leave my sales job and take up gardening, but when my friend Logan mentioned his idea for a mental health support app, I realised I had ideas and a lot of relevant experience to bring to the project too.”

Logan, who lives in Sowerby Bridge, came up with the initial idea for Unmasked when his wife was struggling to cope with her anxiety and depression between sessions of counselling.

The third partner is Robin Cunningham, a 57-year-old from Hebden Bridge who always considered himself “bullet proof”, against anxiety and depression. Following the breakdown of a long-term relationship, ill health and the untimely deaths of three close family members, Robin carried on working unaware that he was suffering from depression. Gradually he withdrew from all social activities and became more and more insular.

The app, has been written by Middlesbrough based developers MGC.  Designer Chris Carroll originally from Bradford said:

“Users can find others of a similar age, in their local area or those who suffer from a similar illness. They can remain anonymous if they prefer to, or they can choose to appear as themselves.

“The app is designed to help people access the support they need on a day to day basis because sometimes all someone needs is a message of support to say ‘I know what you’re going through and I understand.’ We hope this app will provide that. Safeguarding is one of our highest priorities and the system recognises certain keywords or derogatory terms and will alert the moderators to avoid any kind of bullying or harassment. The app is all about support and encouragement and users can give as much or as little information about themselves as they feel comfortable with.”

Users of Unmasked can block or report other users and, in vulnerable times can press an alert button, which works on GPS and points them to the nearest caring agency, such as The Samaritans or their local crisis team. Users can also call for an ambulance or local support groups.