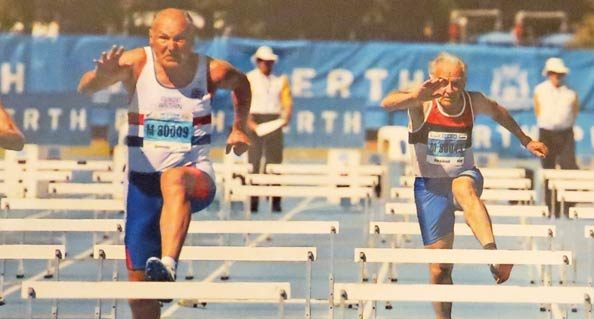 At the tender age of 81, Tony Bowman from Guiseley was recently awarded the British Masters Male Athlete of the Year award by the British Masters Athletics Federation (BMAF). And well deserved the award is too after a lifetime of sports and many records under his belt!

Tony grew up in Middlesex and supported by sporty parents, enjoyed running from an early age, representing Middlesex schools aged 15-16 and winning the hurdles championship in White City, London before placing 2nd in the hurdles event at the All England Schools event in Bradford. He hung up his competitive running shoes at the age of 27 but continued playing hockey and tennis.

Working for Whitbread saw Tony move to Kirkstall, Leeds around 45 years ago, and at the age of 42 he took up athletics again in the veterans category (now known as Masters) which is for ages 35 and over. Since then he has never looked back winning accolade after accolade!

At the age of 71, Tony won the historical Musselburgh New Year Sprint, taking away a big money prize from this renowned professional race as well as the title of the oldest winner by 30 years!

Since turning 80 in September 2015, he has broken 13 records for over 80’s in the UK on track events including the decathlon and both indoor and outdoor pentathlon.

The British Masters Male Athlete of the Year Award was the cherry on top of a very successful 2016 for Tony, first winning the 60m, 60m hurdles and the 200m at the World Indoor Championships in Ancona, Italy, then continuing his success at the World Outdoor Championships in Perth, Australia. There he took first place in the 100m sprint title and the 80m hurdles, 2nd in the 200m and 3rd in the 200m hurdles. Tony continues to be active, recently winning the British pentathlon in London. He is all set for the British Indoors Championships in London before jetting off to Degu in South Korea later this month to take part in the World Indoor Championships as part of the British team.

Tony told us “I consider myself to be the most fortunate, lucky 81yr old in the country! As well as training every other day in the gym, circuit training and hurdling, I continue to play tennis and also do lots of dancing. I love being active and can’t imagine life any other way. Competitive athletics is an expensive hobby as we have to fund everything ourselves from clothing and equipment to entrance fees and travel expenses. I get a small sponsorship from David Lloyd gym where they give me a reduction in membership fees but other than that I have to pay for everything myself. It’s what I love to do though and I think it is very important to stay fit and healthy. Even 2 heart attacks and a bowel operation didn’t hold me back for long!”

With Tony’s passion and dedication to athletics, and living a healthy lifestyle, he is certainly doing all the right things to make sure he achieves his dream. All the team at the Yorkshire Reporter wish Tony all the best for his upcoming competitions!