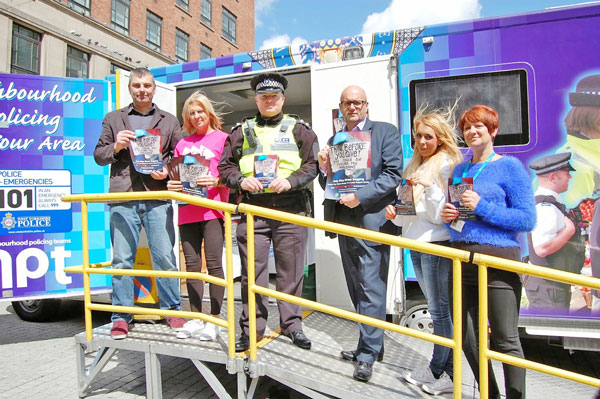 ‘Think Before You Give’ Campaign To Tackle Begging In Leeds

A new campaign has been launched urging both residents and visitors to Leeds not to give to beggars in the city centre, but instead contribute through a dedicated text number which will ensure all donations are used to provide meaningful support to the homeless.

This forms part of an initiative led by the Leeds City Council Safer Leeds Partnership, which including West Yorkshire Police, is working with a range of key support partners including BACIL (Businesses Against Crime In Leeds), Big Issue in the North, St Anne’s Community Services, Crime Reduction Initiative (CRI) Leeds Outreach Team and St George’s Crypt to inform the public why giving money to beggars is not the best way in which to help.

The main aims of the ‘Think Before You Give’ campaign are to:

•
Discourage the public giving money to beggars and instead encourage them to give to those charities supporting the homeless.

•
Highlight to the public how giving their money to beggars on the street may be used to fund an addiction, or be used as an income by ‘Professional beggars’ who have no need to beg, but are doing so as a lifestyle choice.

•
Highlight the support services available to the homeless in the city.

•
Raise awareness among the public and businesses in the city of the work from support services to discourage begging and provide support to help get them off the street.

Anyone wishing to donate by text to help the homeless can do so in the following way: Text TBYG99 and putting the amount after, i.e. £5 to 70070 – The cost of the text is free or to donate in other ways, please see:
www.justgiving.com/thinkbeforeyougive/

“Working closely with partners and charities across our city, we remain absolutely committed to helping and providing a range of meaningful support to those in desperate need of help and who find themselves homeless in Leeds.

“This will not change now or in the future, but what we will not tolerate is those people who are ignoring our repeated offers of support and instead have decided as a lifestyle choice to beg when they have absolutely no reason to do so.

“The aims of our ‘Think Before You Give’ campaign are not just about detailing to the public and local businesses why giving to beggars in the street is not the best way to help but also raising awareness about a new text number where they can be guaranteed their donation will be given to services helping the homeless. If you would like to donate on your phone, please text with your amount, TBYG99.”

“Begging in the city centre is an issue of concern and one which prompts regular complaints from the public and businesses. The police have been working closely with the council and homeless organisations to develop long-term solutions and the ‘Think Before You Give’ campaign is a key element of that work.

“It is important we take a balanced and co-ordinated approach and our priority should always be the wellbeing of the individual involved.

“This new public awareness campaign aims to make street begging less viable as a lifestyle choice while recognising that those with addictions or mental health issues are more likely to receive the help they need if they are encouraged to move away from begging activities and engage with the support services available to them.

“Our aim is to break the cycle of begging, with all the threats that poses to individuals, and help them to make decisions that improve their quality of life.”