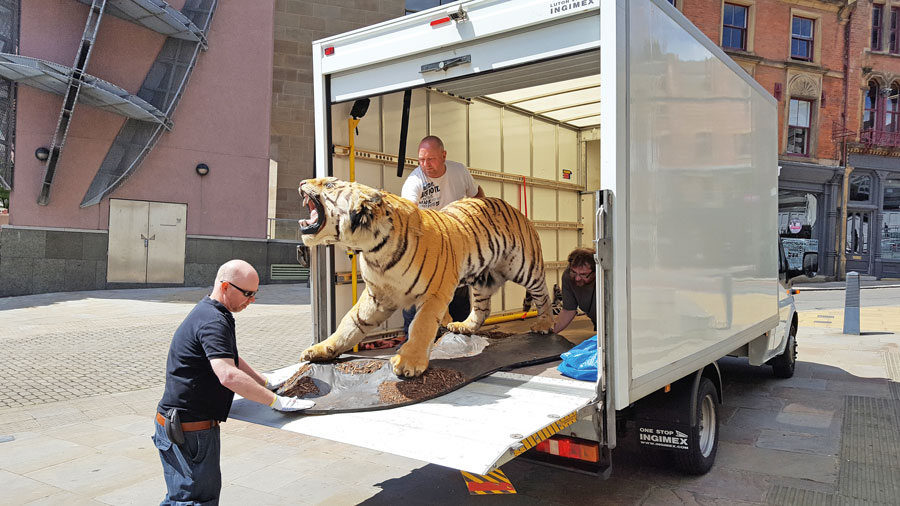 The famous big cat, the Bengal tiger which usually guards the entrance to Leeds City Museum, along with other exotic specimens from the museum’s spectacular Life on Earth Gallery, turned quite a few heads during the recent trips to the Leeds Discovery Centre and back.
The collection of stuffed animals, which also included butterflies, bats and a giant anteater, were taken to the Discovery Centre as part of a specialist conservation programme designed to protect the historic exhibits from potential damage by common pests.
During routine monitoring, the museum team recently discovered larvae of the Webbing Clothes Moth, an insect which feeds on natural fibres including fur and feathers, in some of their taxidermy cases.
As a precaution animals including the 170 year-old tiger were carefully removed and taken to the Discovery Centre where they were placed in special deep freeze, which killed the moths and eggs so they could then be removed.
Rebecca Machin, Leeds Museums and Galleries’ curator of natural sciences said: “These incredible specimens come from all over the world and are some of our most popular and historic exhibits, so we take plenty of precautions to prevent any pests from damaging them.
“Unfortunately, something will very occasionally slip through all our deterrents, so to be safe, we removed a variety of animals, including our famous Leeds Tiger, to the quarantine facility at Leeds Discovery Centre.
The Leeds Tiger was originally shot near Dehra Dun in the Himalayas by decorated soldier Major-General Sir Charles Reid in 1846 after becoming a nuisance to a nearby village.
In 1862 it was purchased by wealthy Leeds industrialist William Gott and presented to the Leeds Philosophical and Literary Society.
Once it was mounted, the tiger was said to be “unequalled in Europe”, with reports at the time saying it was “fitly placed in the centre of the large zoological room and is always the most attractive piece in that collection.”
Also accompanying the tiger on his trip to the Discovery Centre were a black-headed oriole, a huia, which is now extinct, and a yellow-capped mannakin as well as an otter and a grey seal.
Councillor Brian Selby, Leeds City Council’s lead member for museums and galleries, said: “These incredible animal specimens have hundreds of years of natural history behind them and it’s fascinating to see the painstaking work that goes into keeping them so well preserved.
“The Leeds Tiger in particular is one of our most iconic exhibits, which has been enjoyed by generations of local museum-goers and I’m sure the people of Leeds will be very happy to see him back home.”
For more details on the Leeds Discovery Centre visit:
www.leeds.gov.uk/museumsandgalleries/Pages/discoverycentre
For information about Leeds City Museum, visit:
www.leeds.gov.uk/museumsandgalleries/Pages/Leeds-City-Museum