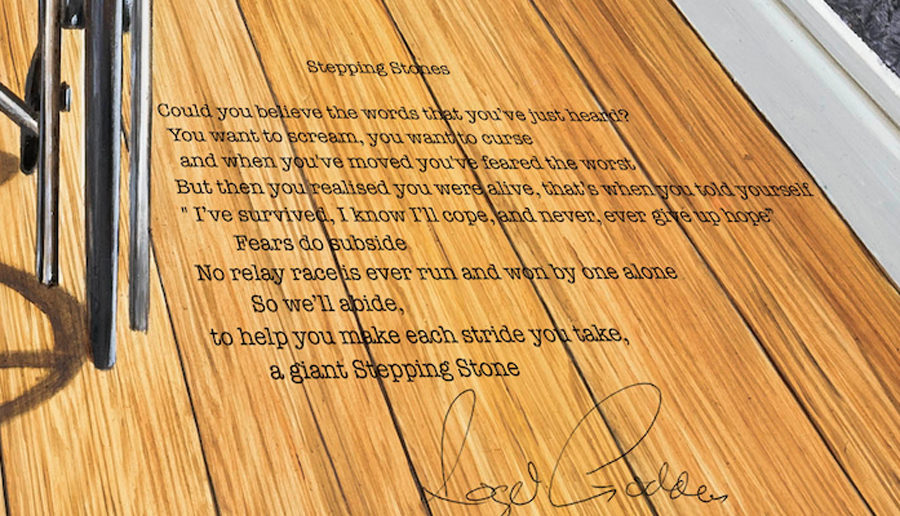 The Writing Is On The Wall

The Stanley and Audrey Burton Gallery at the University of Leeds is currently displaying a unique painting included in their Dreams and Visions: Imagining the Unconscious exhibition. The painting titled ‘The Artist and the Gardener’ is a collaboration between renowned Yorkshire artist Neil Simone and long-time friend, poet Roger Godden, proving that different forms of creativity can blend together to create a stunning piece of artwork. Neil and Roger have also collaborated on one other work called ‘Stepping Stones’ which has been offered to the charity behind the Invictus Games, a multi-sport event open to all wounded and sick serving personnel and veterans. Patron Prince Harry recently wrote to Neil and Roger thanking them for the gift and it is hoped that the charity can profit from the art in some way prior to next year’s games in Sydney, Australia. The poem is part of an original song written for Pinderfields Hospital, and Neil has created an incredibly sensitive and artistic interpretation.

The pair first met in 1974 when Bristolian Roger was walking through the Merrion Centre, Leeds where Neil was exhibiting his art. Captured by Neil’s style, Roger bought his first Simone painting and has followed Neil’s career ever since. Two years ago, Roger, a member of Leeds Writers Circle, took Neil his poem of unrequited love, entitled ‘The Artist and the Gardener’ to see if he would like to interpret the work in oils.

“I was both moved and inspired by the poem and saw this collaboration as something quite different” said Neil. The resulting piece is fantastic and the inspiration Neil took from the words is evident in his work, with the poem featuring as part of the painting. ■ Neil Simone and Roger Godden with ‘The Artist and the Gardener’ painting at Simone Galleries, Pateley Bridge

As a mature student, Roger recently graduated in Philosophy and the History of Philosophy at the University of Leeds. Due to the uniqueness of the work, Neil had intended to keep ‘The Artist and the Gardener’ for his private collection but with Roger’s connection to the University, suggested they offer the original to showcase within the gallery there. Curator Layla Bloom was delighted to accept the painting.

Dreams and Visions: Imagining the Unconscious exhibition is on until the 25th of this month. For more information on the Stanley and Audrey Burton Gallery visit library.leeds.ac.uk/art-gallery

Neil Simone art can also be found along with his wife Heather’s at Simone Galleries, Pateley Bridge .