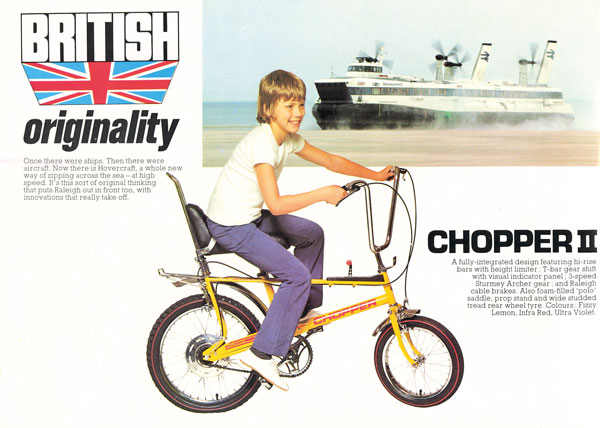 It was back in 1967 that Raleigh first patented the design for the now iconic Chopper. Even now, some 48 years later, a week hardly passes without a visitor to our shop sharing his or her own Raleigh Chopper memories with me. In fact if I was paid £1 per story I could probably have retired by now!

I’m sure that the designer, Alan Oakley, could not have predicted how his bicycle could have developed a worldwide reputation with owners clubs now established across the globe. Despite the fond memories that people still share, the original bike did have some design flaws and riders regularly experienced accidents, some were serious. This led to a re-design in 1972 when, amongst other things, the seat was shortened to provent two children riding it at the same time.

The arrival of the BMX, in the early 1980’s meant that the Chopper fell out of favour and was eventually withdrawn from sale. Original bikes now change hands for considerably more than the £34 price that they were first sold for. The highest recorded sale was over £7000 for an original bike still in the manufacturers packaging.

Interest in the Raleigh Chopper remains strong and has recently been helped by Dave Simms who rode the 1600 miles of the Tour de France in July of this year, raising money for Help for Heroes.

Having ignored request for a re launch of the Chopper, for many years, Raleigh eventually gave in and in 2004 launched the Mark 3 Chopper, which at first glance looked like the original but had various subtle changes to make it safe for the 21st century. I was running a Raleigh bicycle shop in Nottingham on the day that the Mark 3 was announced. The phone rang all day long and by the close of business we had sold out!

Since the launch of the Mark 3 there have been various limited edition Raleigh Choppers produced. Last year we saw the  “John Player Special”, striking in its black and gold livery, and the year before was the “Dennis The Menace” edition, which was plastered with images of the Beano character.

Christmas 2015 will see the launch of another limited edition and with only 400 to be produced it is sure to become a collectors item.

Retro is back in the 21st Century! The frame is built in that classic Chopper style, with the Ape hanger bars and back pad.

With modern components and safer controls, the Chopper features the same qualities as of when they first appeared in the 70s but without the difficulties of riding them!

The aluminum wheels match up with the 1970s’ Choppers – 16″ in the front and 20″ in the rear, with mudguards to keep the mud off and V-type brakes for smooth stopping. The motorbike inspired tyres will provide ample grip yet, making the Chopper Blue a fitting tribute to those classical looking scooters from Italy…such as the iconic Vespa’s.

We are expecting the bikes to be delivered from the factory very soon. Keep an eye on our shop windows, as we will put one on display as soon as we can.