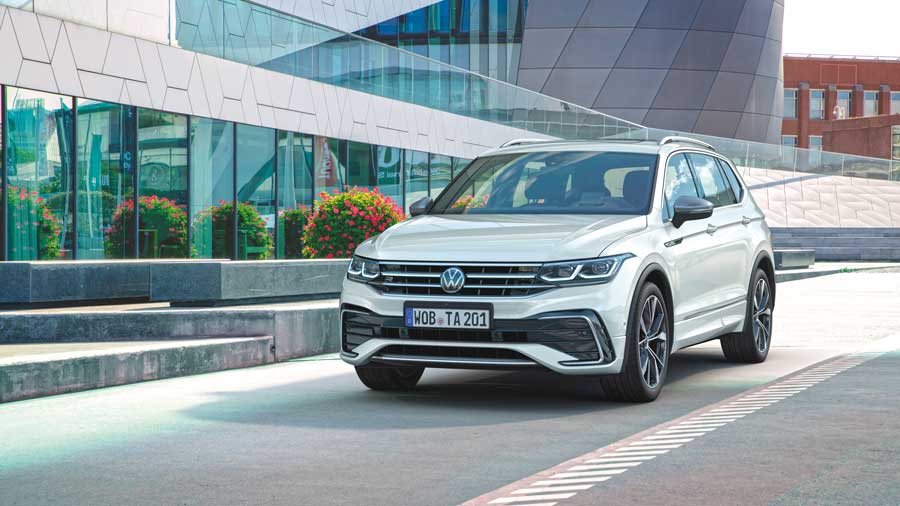 The Tiguan was given an update back in autumn 2020 and now it is the turn of the long-wheelbase version: revised design, new control and assist systems, new premium features such as interactive IQ.LIGHT LED matrix headlights and touch panels to control the standard automatic air conditioner take the Tiguan Allspace to the next level. Currently, more than every second Tiguan (55 percent) that rolls off the production line worldwide has a long wheelbase. The XL version of the Tiguan Allspace can, upon request, be fitted to become an SUV with seven seats or boast 1,920 litres of storage space. In Germany, it is available in the new specification packages Life, Elegance and R-Line.

Since the start of production of the long version in 2017, around 1.5 million units of the long-wheelbase version (LWB) have been sold worldwide. The long version offered in Europe as the Tiguan Allspace is optionally available with a third row of seats – a rare specification option in this segment. This feature makes it a perfect partner for families and people with an active lifestyle.

After the major visual and technological update of the Tiguan, the Tiguan Allspace is now next in line – with a sharper look, digital cockpit, new technologies, new equipment matrix and comprehensive connectivity. Its virtues as a spacious SUV remain unchanged: with a five-seat configuration, it offers a luggage compartment volume of 760 to 1,920 litres, with the seven-seater offering 700 to 1,755 litres. The optional seats in the third row can be folded like the rear bench seat and backrest in the second row. They can be dropped to fit flush into the luggage compartment floor thus creating an even loading area. There are three TSIs and two TDIs engines available. Upon request or depending on the equipment, a 7-speed dual clutch gearbox ensures fast, efficient gear changes and the optional 4MOTION all-wheel drive offers optimum traction.

Due to its redesigned front, the Tiguan Allspace has now grown to a length of 4,723 mm (22 mm longer); all the generous interior measurements are unchanged. With its newly designed front featuring an independent radiator grille and elegant signature light, the vehicle exudes premium quality. For the first time, the Tiguan Allspace can now be ordered with IQ.LIGHT LED matrix headlights. A further new feature is the “sweeping” indicator function of the LED turn signals. On either side of the redesigned Volkswagen logo, an illuminated strip in the radiator grille adds a striking visual note.