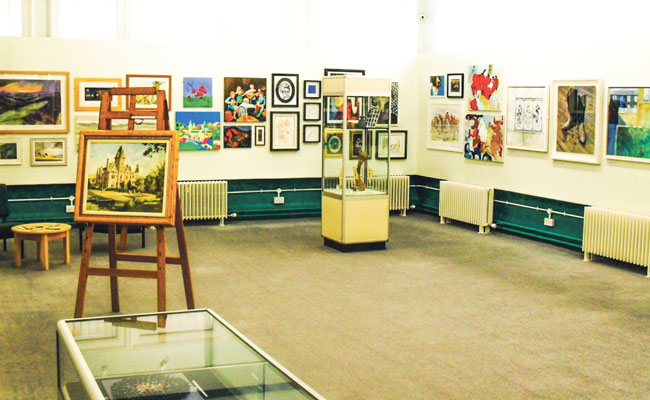 The exhibition contains a selection of contemporary artwork by amateur and professional artists. On entering the gallery, which is situated in the upstairs room at the library, I was greeted by an outstanding oil painting of the Boothroyd building in Dewsbury which shares its name with Dewsbury lass, Betty Boothroyd, the first female ‘Speaker’ of the House of Commons.

There are portraits of famous people such as John Lennon, Charlie Chaplin and Billie Holiday. Yorkshire has been voted the third most popular tourist region in the world and this exhibition contains a number of paintings of our beautiful county in areas such as Knaresborough, Spurn Point, Staithes, Robin Hood’s Bay, Ingleborough, Marsden Moor, Scarborough and Burton Agnes Hall near Bridlington.

Gazing at a landscape of sea and clouds, I was reminded of David Dimbleby’s recent comments on his TV programme ‘Britain and the Sea’ of how difficult it is to paint the waves of the sea due to its continual movement. Visitors are given the choice to vote for their favourite work of art. I chose Trevor Ferguson’s ‘Dignity’, an oil painting that shows so much character in the face of an old man. The winning artist will be awarded an exhibition in the art kiosk at Batley Library, to be staged in 2014.

The exhibition runs until 8th February 2014.