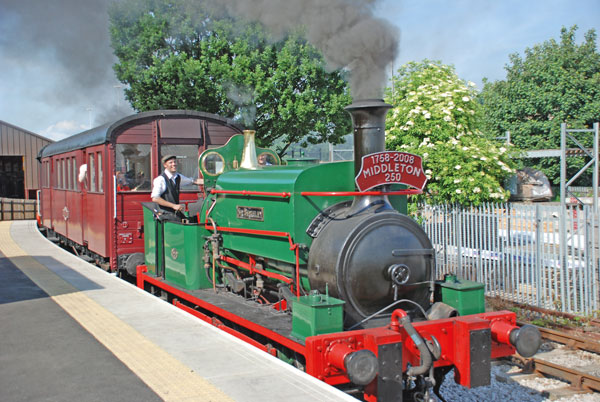 The History Of Middleton Railway – Still Going Full Steam Ahead

Middleton Railway in Leeds is the oldest working railway in the world. Now run by a volunteer organisation and open to the public, we take a look at how it began as a wagonway and developed through the years to the present day.

Construction of the Middleton Wagonway began in 1757, creating a faster, easier way of transporting coal from the Middleton bell pits to Leeds. A rival pit in Rothwell were able to use the river to transport their coal putting them at an advantage, so the wagonway was Middleton’s solution to this problem. The agent in charge of Middleton at this time was Richard Humble, who being from Tyneside had seen many such wagonways which were common in his native north east. Owner Charles Brandling made railway history by seeking ratification in an Act of Parliament in 1758 to ensure the permanence of the line and protect its route. This was the very first Act titled for the building of a railway.

Thousands of tons of coal per year were pulled by horses down the wagonway to Leeds following its opening in September 1758. This more efficient mode of transport led to cheaper coal prices, which in turn meant that Leeds became an important centre for all coal powered industries such as brick, glass and pottery manufacture and cloth making. Around the end of the 18th century the wooden tracks were replaced with iron rails.

By 1812 things were proving to be more difficult for the colliery line. The army was purchasing work horses and fodder for the Duke of Wellington in his pursuit of Napoleon around Europe. This led to prices rising as both fodder and horses became scarcer in England. Middleton Colliery again needed to reduce transport costs, and colliery steward John Blenkinsop managed this substantially by introducing steam locomotives. As only cast iron rails were available, any locomotive needed to be light enough not to break them. This had been a constant problem for previous designs and with that in mind, Blenkinsop invented a rack and pinion system similar to those still used on mountain railways today. This new system enabled the locomotives to be light enough for the tracks while retaining a good traction. Matthew Murray designed and built four locomotives for the colliery incorporating Blenkinsop’s design. These were the first commercially viable locomotives in the world.

The railway immediately attracted visitors from around the world, many of whom tried to interest their own governments in the idea of using locomotives. Two using the Murray-Blenkinsop design were built in Berlin but these were unsuccessful. Middleton and its steam locomotives were considered a marvel at the time, but one local child was less impressed. David Joy who ironically went on to become a successful engineer wrote in his diary “Living in Hunslet Lane, on the London Road, the old coal railway from the Middleton Pits into Leeds, ran behind our house a few fields off, and we used to see the steam from the engines rise above the trees. Once I remember going with my nurse, who held my hand (I had to stretch it up to hers, I was so little) while we stood to watch the engine with its train of coal-wagons pass. We were told it would come up like a flash of lightning, but it only came lumbering on like a cart.”

As Middleton were the first to use steam locomotives, they were also the first to employ a regular professional train driver. The job went to James Hewitt – a former pit surface labourer. He was trained by Fenton, Murray & Wood’s test driver (the company who designed the locomotives). A more unfortunate world first for the railway was the death of a member of public killed by a locomotive, in 1813. It is almost certain to be a boy named John Bruce who was just 13 years old when killed whilst running alongside the track. This tragedy was reported in the Leeds Mercury at the time who said it would “operate as a warning to others.”

Middleton was not without other tragedies. In February 1818 a boiler exploded and killed the driver. The cause was said to be the driver tampering with the safety valves and the Leeds Mercury reported that he was “carried with great violence into an adjoining field the distance of one hundred yards.” There was another explosion some years later in 1834, this time probably caused by a badly worn boiler kept going long past its best. The driver killed in this incident was unfortunately, the aforementioned James Hewitt. The following year, steam was abandoned and the horses returned until 1866.

When steam railways began to appear across the country, Leeds had a number of engineers with experience in locomotive construction and as a result the city profited from this new industry. The engine works firms based in Hunslet supplied locomotives and railway equipment to many countries around the world.

In 1881 Middleton Railway converted its tracks to standard gauge which allowed it to connect with the Midland Railway, followed in 1899 with links to the Great Northern Railway. For nearly 50 years following this, things were quiet at Middleton.

The Middleton Estate & Colliery became part of the National Coal Board in 1947. This led to some changes including parts of the line closing. The owners of one stretch of abandoned line, Clayton, Son & Co allowed preservationists from Leeds University to move into it. The founder of this volunteer group was Dr R F Youell, who was a lecturer at the University.

He worked regularly on the section of railway leading to British Railways and a small boy used to take him to his home nearby so he could wash his hands before getting back in his car and driving home. That small boy, Ian Smith, is now the railway’s Vice Chairman!

In June 1960, Middleton became the first standard-gauge railway to be operated by unpaid volunteers. For only one week, passenger services were operated using the largest double deck tram in Britain (seating 106 passengers) hauled by a locomotive hired from the Hunslet Engine Company. They then used the tracks to haul goods for Claytons, moving scrap and fabricated metal between Claytons and a neighbouring company Robinson & Birdsell. Goods traffic began to decline around 1969 and the Middleton Railway Trust as the volunteer group was now known, resumed regular passenger services. These have continued ever since on weekends and bank holidays. The first special annual train for school trips first ran in 1975. In 1983, goods traffic ceased completely and the Trust moved all their vehicles and equipment to the site they remain in today.

Today, the railway still has a lot to offer. Every weekend and Bank Holidays you can enjoy a twenty five minute long round trip from the Moor Road site to Park Halt in Middleton Park. On Saturdays diesel trains are run, and steam trains on Sundays and Bank Holidays. The trips are very popular with families and train enthusiasts alike. There are also special events that run throughout the year such as running heritage locomotives, model railway exhibitions and even a party train.

The engine house building houses the ticket office, an audio-visual display, the well-stocked souvenir shop and the display hall. The display hall is home to the museum collection of locomotives, objects from Leeds locomotive building industry and other items of railway history. Here, two steam locomotive cabs are accessible to gain an understanding of how these incredible machines work. Locomotives at Middleton include steam trains built in the late 19th century – early 20th century, and diesel and electric powered from the 1930’s -70’s.

Vice Chairman Ian Smith says “I have known this railway all my life and I am proud of its achievements, coming from a run-down, even derelict piece of railway to the successful tourist line we are today. All of this has been achieved by volunteers from all ages and walks of life. To be part of something so historically important is very pleasing and it’s also pleasing to see we have a flourishing group of younger people who are assisting with our operations.”

The Middleton Railway is a real gem in Leeds’ history, proving that a humble pit wagonway can be a hub of innovation and set the bar for the rest of the world to follow. Thanks to the volunteers at the Middleton Railway Trust, the railway has been preserved and is providing a fantastic day out full of enjoyment and education for many. Offering a vast range of railway history, plus an opportunity to enjoy the magic of a steam train journey, it is certainly worth a visit!