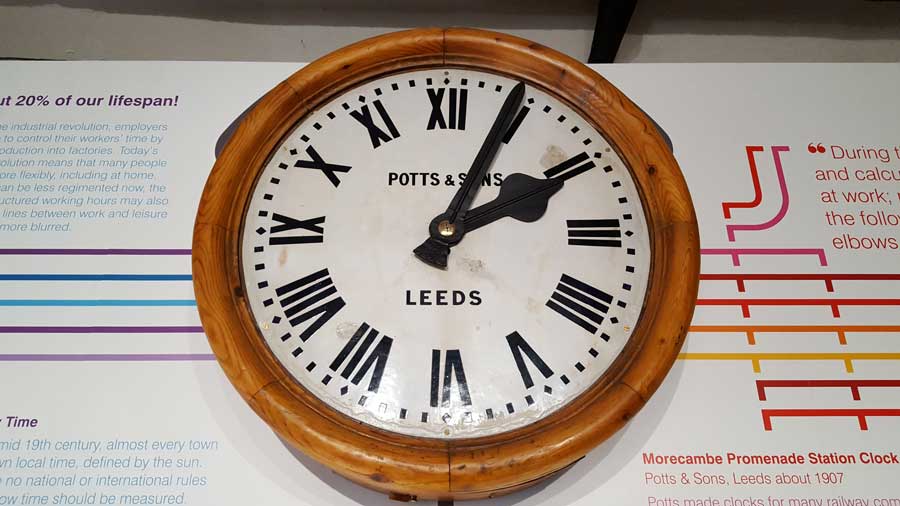 THE HISTORY OF CLOCKS

As the clocks move forward by an hour at the end of the month, many of us appreciate the lighter, brighter days where we no longer have to travel to and from work in the dark. The altering of the clock brings with it an anticipation of spring, and with the brightening of the days, dare I say a brightening of mood too!

With ever increasingly busy lives, time seems to be at a premium, and our lives are very much ruled by the clock. But can you imagine life without one? There was a time (pardon the pun) when clocks did not exist – although they are one of the oldest human inventions, so in this month’s feature we discover some of the first clocks, and then look at a famous clockmaker from right here in Leeds – Potts & Sons.

A BRIEF HISTORY OF CLOCKS

To ask who invented the first clock is too broad a question. People have been inventing devices to keep track of time for thousands of years, from the gigantic obelisks of the Ancient Egyptians (early sundials), to water clocks used by the Ancient Greeks as well as in China by the Zhou dynasty. There were candle clocks, time sticks and of course the hourglass. The invention of the verge escapement was a major advance which made possible the first mechanical clocks in the Middle Ages, but their origin is not known.

Even the mechanical clock has different incarnations. From balance wheels and balance spring, to pendulum to quartz, and more recently, atomic. The oldest working clock in the world dates from 1386 and is in Salisbury Cathedral. (Although most original parts remain, it was converted to pendulum at some point which was replaced by a replica verge in the 1950’s.) Most early clocks were in churches and were extremely heavy as they were operated by weights. By about 1450, the coiled spring was invented which made possible portable clocks. The first watches were made in 1510. Only incredibly wealthy people had clocks in their homes in the 16th century as they were very expensive.

Time keeping improved when Dutch scientist Christiaan Huygens designed and built a pendulum clock in 1657. This pioneering invention vastly increased the accuracy, but ironically, they were still set using sundials. Galileo had studied pendulums as early as 1582 but had never constructed a clock based on that design. Early pendulum clocks only lost around one minute per day, but later only by around 10 seconds making them very accurate for their time. They remained the most precise timekeeper in the world up until the 1930’s. Huygens was also integral in developing watches with his spiral hairspring invention. This balance spring system is still used in mechanical watchmaking today.

The 19th century brought about electric or electrostatic clocks. Sir Francis Ronalds produced the electrostatic clock in 1815 which was powered with a high voltage battery, but the electrical properties varied with the weather. In 1840, Alexander Bain patented the first electric clock, and along with his friend John Barwise also patented an electromagnetic pendulum.

In the later half of the 19th century Jacques and Pierre Curie discovered the piezoelectric properties of quartz, but it wasn’t until the beginning of the 20th century that it was utilised in a clock. This technology was constantly developed and improved over the following decades and standardised time was based on quartz clocks until the 1960’s when it was taken over by atomic clocks.

The most accurate timekeeping devices today are atomic clocks. Accurate to within a few seconds over thousands of years, they are used to calibrate other clocks and to keep standardised time. Although the use of magnetic resonance was developed in the 1930’s it was not until the late 50’s – early 60’s that it was used effectively to create atomic clocks that were to take over timekeeping for a modern future.

As clocks became more accurate, people began to rely on them more and more. Leeds is home to a famous family who made time their business. Clocks handcrafted right here in the city counted the seconds away all over the world!

Potts Clocks began with William Potts, born in 1809. He was apprenticed to Samuel Thompson a clockmaker from Darlington, and after learning everything he could, moved to Pudsey at the age of 24 to set up his own business. To start with, he mainly made domestic timepieces, for some of the merchant and wealthier homes of the city, but he gradually moved into building and repairing public clocks. In 1862 he moved the business to Guildford Street in Leeds, and a workshop was added in nearby Cookridge Street. This was a very profitable time for Potts and commissions for new clocks flew in from the city, Yorkshire and even abroad. Popular destinations for the clocks were typically cathedrals and churches, town halls, schools and railways. The company was even granted a Royal Warrant in 1897. When William’s sons joined the business, it was renamed William Potts & Sons Ltd. After the First World War, two sons left to start up on their own – Tom in 1928 and Charles in 1930. In 1935, William Potts & Sons Ltd merged with the Smith of Derby Group but retained its famous name and Leeds base.

Several of the most famous clocks made by Potts are right here in the city centre of Leeds including on Leeds Town Hall and the Corn Exchange. There is the clock at the northern end of Thorntons Arcade that has captured the imagination of many a child as they walk through. The timekeeping mechanism was made by Potts & Sons, while the four life-size figures who strike it were made by Leeds sculptor John Wormald Appleyard. All characters from Sir Walter Scott’s Ivanhoe, Richard Coeur-de-Lion and Friar Tuck strike the hours, whilst Robin Hood and Gurth the Swineherd strike the quarters. Another interesting Wm Potts & Sons clock is in the Grand Arcade, installed in 1898. In recent years it had fallen into disrepair but a campaign by retailers in the arcade raised funds to have the mechanism restored and it works once more with knights in shining armour striking the quarters and a cockerel perched above which flaps its wings! Although these two examples are whimsical in nature, the clocks that were manufactured by Potts were of extreme importance to the places they were installed. A village of people would often rely on the chimes of the church clock to keep track of time, a railway platform full of people would check if the train arrived punctually, and how long did they have to bid farewell to a loved one before it pulled out of the station?

Clocks installed further afield than the city of Leeds included on the Pierhead Building at Cardiff Docks, a church hall in Melbourne, Australia, the post office in Port Lyttleton, New Zealand, two in Russia and five in India to name but a few!

The clock at Cardiff was sold off to an American collector in the 1970’s but was returned and restored, being brought back to life as a piece of public art in 2011. Restored by Smith of Derby, using original Potts parts and painted in traditional Potts colours of burgundy and black, it has been encased in a modern design with elements of significance to Cardiff, and placed in the spot where ships would have operated out of the city in the late 18th century.

Another clock made by Potts that has recently been restored is now in pride of place at Leeds Industrial Museum. The 111-year-old clock made from solid pine was originally situated at Morecambe Promenade railway station in 1907 where Edwardians would have relied on its timekeeping in the popular holiday hotspot. Morecambe was affectionately referred to as ‘Bradford on Sea’ at the time because of the huge influx of Yorkshire tourists it greeted every summer. The railway station was even built close to the old Midland Hotel so that holidaymakers would not have far to go once they disembarked the train from Leeds.

Leeds Industrial Museum at Armley Mills purchased the clock from a private collector who had owned it since the 1970s, and it has been fully restored over several months of painstaking work. It is now part of an interactive display which explores how working patterns have been governed by the clock and looks at how the growth of Britain’s railway network from the 1830s created the need for standard time in different towns across the country – also known as ‘railway time’.

John McGoldrick, Leeds Museums and Galleries’ curator of industrial history said “Potts and Sons started out as very much a local, family firm, but they became the benchmark for Victorian clockmakers and their creations were eventually installed at public buildings all around the world. This particular timepiece must have been one of the very first things that tens of thousands of Edwardians saw when they arrived at Morecambe for their summer holidays. It’s great to think that our visitors will get the chance to enjoy it now too.”

Many of the clocks you see out and about in Leeds will have been made by Potts & Sons, but if you want to see this particular one, visit www.leeds.gov.uk/museumsandgalleries/armleymills for more information.

And remember – as American historian Alice Morse Earle once said;

“The clock is running. Make the most of today. Time waits for no man. Yesterday is history. Tomorrow is a mystery. Today is a gift. That’s why it is called the present.”