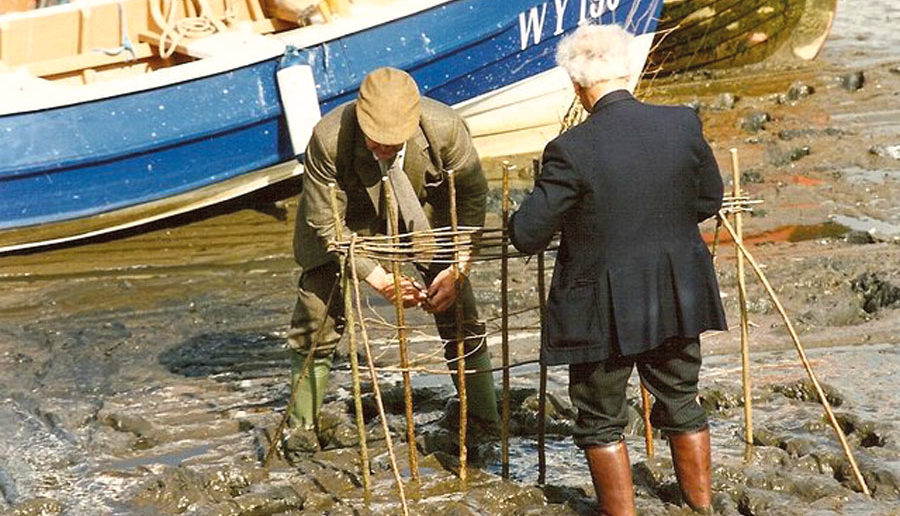 The Ceremony of the Horngarth

The 30th of this month is Ascension Day. This day commemorates Jesus Ascending bodily to heaven in Christianity and is traditionally celebrated on a Thursday, the 40th day of Easter. Ascension Day is also linked to a strange but ancient tradition which takes place in Whitby – the planting of the Penny Hedge or officially, the Ceremony of the Horngarth.

Every year at 9am on the eve of Ascension Day the ceremony takes place on the east bank of the River Esk in Whitby’s upper harbour. Under the supervision of the Bailiff of the Manor of Fyling, a hedge is constructed from 9 hazel stakes which are pounded into the mud with an ancient mallet and then intertwined with 9 pliant branches. The lower part of the ‘hedge’ is filled in with brushwood and three blasts on a ram’s horn sound the completion of the structure, followed by three cries of “out on ye” by the Bailiff. The hedge must be strong enough to withstand three tides.

But why is this strange and temporary structure constructed every year and with such ritual? It all stems from a legend dating back to 1159. The Abbot of Whitby is said to have imposed a penance on three hunters and their descendants for all time, after they murdered a hermit at Eskdale. The men were the Lord of Ugglebarnby – William de Bruce, the Lord of Sneton – Ralph de Percy and a gentleman freeholder named Allatson. Meeting on the 16th of October to hunt wild boar, their hounds chased the boar to the chapel and hermitage of Eskdale-Side where it disappeared inside the chapel and died. Lionel Charlton’s ‘History of Whitby’ Book II (1779) reads ‘The boar being very fore, and very hotly pursued, took in at the chapel door, and there died: Whereupon the Hermit shut the hounds out of the chapel. The gentlemen, followed the cry of their hounds, and so came to the hermitage, calling on the Hermit, who opened the door and within they found the boar lying dead; for which the gentlemen in very great fury, did most violently and cruelly run at the Hermit with their boar-staves, whereby he died soon after.’

The legend continues that on the verge of death, the Hermit sent for the Abbot who promised to punish the men by death for their heinous crime. However, the Hermit bid the Abbot to instead give them penance for the safeguard of their souls. The penance was to cut the stakes and carry them on their backs to Whitby where they would make the hedge every year. The tale in the book continues ‘Each of you shall do, make and execute the said service all that very hour every year, except it be full sea at that hour; but when it shall so fall out, this service shall cease. If you, or your successors, shall refuse this service, so long as it shall not be the full sea at the aforesaid hour, you or yours shall forfeit you lands to the Abbot of Whitby, or his successors.’

The high tide in the legend actually occurred in 1981. As the full moon occurred on Sunday the 19th April, the following Sunday would have been outside the limit of the 25th in which to observe Easter Day. Therefore, it was kept on the same day as the full moon. This meant that 9am on the Ascension Eve was high tide and the hedge could not be planted. The legend would have released the town of Whitby from the ritual from that date on, but public demand determined it continue.

Most historians agree that the legend is simply a fabricated story that took hold all those centuries ago, and that the tradition probably stems from the ritual of ‘Horngarth’ – a requirement of tenants to maintain the hedges dividing their lands or forfeit them to the Abbot of Whitby. Either way, a fascinating Yorkshire tradition that has continued except the once, for hundreds of years!