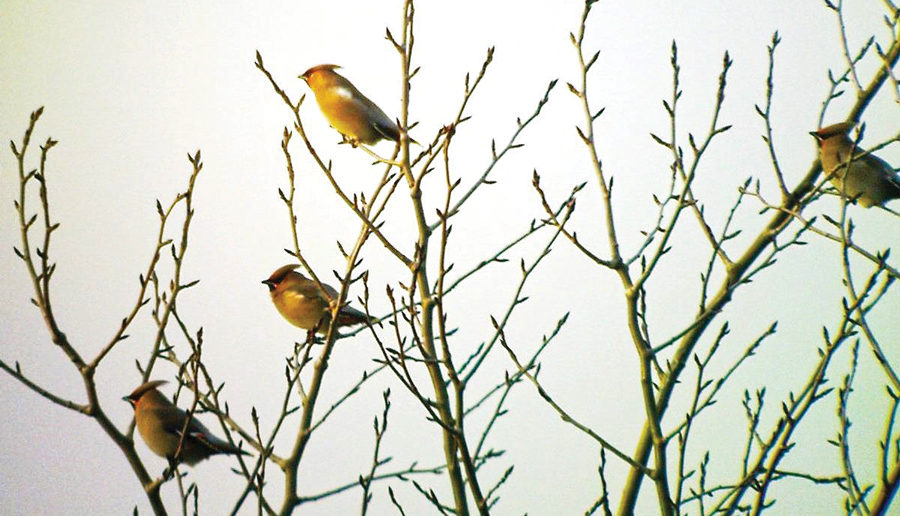 The Beasts From The East

It took some time this autumn but, finally, a small flock of redwing have appeared in the holly tree at the bottom of my garden. A dozen chaffinch are also using my garden to feed where I usually only have one or two.  This is because the weather is now coming from the east instead of the south.

Our winter visitors from the east began arriving in September but most of the time since then, the weather has been travelling in the wrong direction, or there have been storms over the North Sea. This has made migration difficult for our European birds. The ‘beasts from the east’ that we welcomed in September have remained in the north of our county and the rest have stayed on the continent. Now, with a north-easterly wind behind them, and freezing temperatures across Europe, large flocks of redwing, fieldfare, blackbird, mistle thrush, starling, chaffinch and brambling will begin to appear. If we’re lucky, we may even get good numbers of that striking bird, the waxwing.

You can prepare your garden for the beasts from the east by ensuring you place plenty of food on the ground. Redwing and fieldfare will be drawn to berries from rowan, pyracantha, cotoneaster, hawthorn and holly but when these berries have been eaten, they will enjoy feeding from apples on the ground. Chop them in half and other birds will be able to pick at the soft fruit. Insects will also feed on the apples and birds will be able to eat these too. Scan the garden regularly with your binoculars. Redwings are as small as a song thrush and have a prominent cream eyebrow, called a supercilium. They make a soft ‘tseep’ call as they fly which can be heard on still nights as they move from place to place. Fieldfare are larger. They have a grey head, brown back and wings, a grey rump and a lovely, warm chevroned breast. They make a ‘chack chack’ call as they fly. To attract extra chaffinches, place seed on the ground. If you get greater numbers visiting your garden then they may bring some bramblings with them. Bramblings in winter have an orange tinge and can look similar to female chaffinches when seen in the low, winter sunlight. Look for a yellow beak, speckles on the flank, a speckled back and a white rump. Chaffinches have a grey beak, plain backs and sides and their rump is olive.

You may notice that your garden becomes home to lots of blackbirds over the next few weeks. Some of these will have come from Europe. You can identify the males easily as they are much chunkier than British blackbirds. They have more developed muscles to help them fly over the North Sea and this makes them look larger. The migratory males will also have a darker beak than those born in the UK. British blackbirds already have a bright yellow beak. Starling numbers will also increase and will be looking for a good supply of fat and seed.

There are still very few reports of waxwings and starling murmurations at the time of writing but look out for their silhouettes, with characteristic crests, on the tops of trees and listen for their ringing call, like an old trimphone. To get regular updates and information about where to see waxwings and good starling murmurations in Yorkshire, you can sign up to alerts via my website.