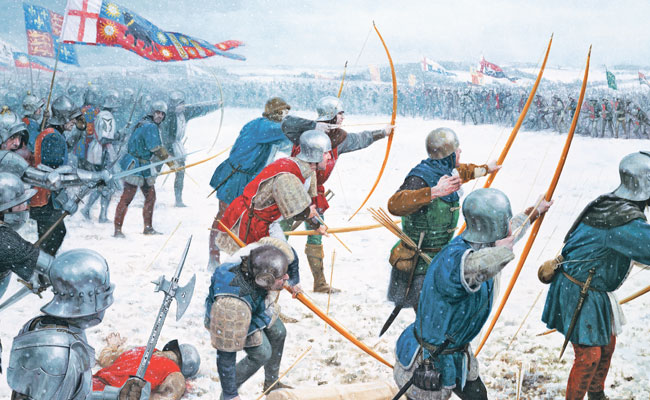 The Battle Of Towton

The Wars of the Roses is something that just about everyone in the UK is aware of from Britain’s’ colourful and varied past. But what was it all about? What caused this period of civil war and what was the legacy that was left behind? Here, the Yorkshire Reporter looks at the largest battle in our region – the battle of Towton with the help of experts in the subject and members of the Towton Battlefield Society.

Along with learning about the events of over 500 years ago, we found out what Towton means to different people today and how that fateful day in centuries past has shaped their lives. From historians and history fans to artists, poets and even pub landlords, the battle is part of who we as a nation, are today.

George Goodwin is an author and history graduate from Pembroke College, Cambridge. He is also a member of the Battlefields Trust and the Towton Battlefield Society. He has written ‘Fatal Colours’ which is about the battle of Towton, and ‘Fatal Rivalry’ about the battle of Flodden in 1513. In this article written for the Yorkshire Reporter, he explains the events that lead to the Wars of the Roses and the importance of the Battle of Towton:

Henry V showed how successful an active English medieval king could be. He was a commanding figure who led his nobility to triumph in war. By 1422 all of northern France, including Paris, was controlled by England with its Burgundian ally. Taken together with its territories in Aquitaine, this was England’s greatest ever empire in continental Europe.

But in 1422 Henry V died and was succeeded by his nine-month son Henry VI. The government of the country was placed in the hands of the Great Council until such time as young Henry VI would be due to rule himself. In 1437 Henry VI came of age, but soon showed himself incapable of ruling.

Henry VI’s strange passivity was inexplicable to his contemporaries, but detailed accounts of his behaviour point to his having suffered from untreated schizophrenia. It was disastrous for the country because England’s government depended on having an active ruler able to be its chief administrator, lawgiver, money raiser and general.

In the 1440s a small clique under William de La Pole, Earl, Marquess and then Duke of Suffolk, sought to fill the vacuum of authority. However, though they controlled the King they could not maintain control of France.

With all of English France gone by 1450 and Suffolk murdered, the Dukes of York and Somerset competed for dominance. Finally in 1455 York resolved that competition by defeating and killing Somerset and his allies at St Albans, the first battle in the first War of the Roses.

Yet the death of Somerset was to give York a greater problem. By 1459 Henry VI’s Queen, Margaret of Anjou, had come to the fore determined to destroy York and his allies, most notably the father and son Richard Nevilles, respectively Earls of Salisbury and Warwick. There then followed six battles in eighteen months between what should now be identified as the Lancastrians and the Yorkists. The initiative see-sawed between them and though York and Salisbury were killed at the end of 1460, the Yorkists rallied under Warwick and York’s eldest son Edward.

But the nature of the war changed over those eighteen months. There had been some exchange of noble prisoners after the early battles, but increasingly, in the manner of an escalating vendetta, those who were captured were killed. By March 1461 it had become an inter-regional war, with the majority of the Lancastrian army at Towton coming from the North and their Yorkist opponents mainly from the South. Northerners and Southerners had come to regard each other as aliens and Towton would be fought with no mercy given on either side. Finally both sides had a King, with Edward acclaimed as Edward IV in early March.

This last point was significant. In the short term, for bringing vast numbers to the decisive battle at Towton. In the long run, because after Towton an English mediaeval king, supported by just a minority of the nobility, had replaced his predecessor through battle. A period of extraordinary instability would result, including two further Wars of the Roses. Dynastic stability would not finally return until after the ‘Tudor Rose’ accession of Henry VIII, fortified during his later reign by the active use of the executioner’s axe.

The Battle of Towton

As George Goodwin states, the battle at Towton was a decisive one in English history. England could not have two ruling Kings, and with noble supporters on both sides, the result of the battle would determine who would rule. So what happened on Palm Sunday 1461 that lead to 18yr old Edward IV becoming King of England?

Towton is probably the most brutal battle to be fought on English soil with estimated casualties at around 28,000. It is also estimated that out of the men in England and Wales eligible to fight, one tenth of them were present on the battlefield at Towton. The number of men on the field that day was in excess of 55,000 with the Lancastrians having a larger force of 30-35,000 against the York army of 25-30,000.

While Henry VI was not present on the battlefield at Towton, instead leaving Henry Beaufort, Duke of Somerset in charge of his Lancastrian army while he prayed at a church in York, Edward IV was an imposing leader on the Yorkist lines standing well over 6ft tall.

The two vast armies lined up on Towton Dale in a terrible snow storm. The Lancastrians had snow and a strong wind blowing in their faces which brought with it problems such as the arrow exchange at the start of the battle. The Yorkist archers were instructed to take advantage of the weather conditions and to fire their arrows down wind, allowing them to hit Lancastrians while staying out of reach of return fire. The Lancastrians could not see where they were firing because of the snow and their arrows were falling short because of strong winds against them. They were taking heavy losses from the onslaught of arrow fire so were ordered to charge at enemy lines.

The fighting went on for hours and the Lancastrians started to get the upper hand over the Yorkists due to their higher number of troops. Also, they had hidden mounted spearmen in the trees at York’s left flank who had entered the battle and were helping to tip the scales in favour of the Lancastrians.

John de Mowbray, the 3rd Duke of Norfolk was running late with his troops of approx 5000 men having been sent east to raise more forces and York was on the brink of defeat when he turned up, crashing into the Lancastrian left flank. This meant that the Lancastrian lines had rotated and were now faced with a deep slippery slope and a swollen Cock Beck to their rear. The Lancastrians were again suffering heavy losses and tried to flee, again receiving heavy arrow fire while trying to cross the beck, and men were trampled, cut down or captured due to their difficulties in withdrawing, during which they were chased mercilessly by several units of opposing forces. Many Lancastrian troops were also drowned while attempting a crossing at the River Wharfe, as a bridge collapsed under the weight of the men.

The Lancastrian nobility suffered great loss, including Northumberland and Trollope who fell in battle, as well as more famously Lord Dacre who was said to have died from an arrow wound to the throat. His tomb is in the churchyard of All Saints in Saxton village where he was buried with his war horse. Contrastingly, the Yorkist army lost only one noble at the battle– Horne.

With the Yorkists victorious, and many of Henry’s supporters dead, Henry VI fled the country with his wife and son, and Edward IV took the throne of England. Edward then ruled for nine years before Henry was briefly reinstated as King in October 1470 for 6 months. Warwick and Edward’s brother George had formed a secret alliance with Margaret of Anjou and effectively ruled in Henrys name during this short time until Warwick overreached himself by declaring war on Burgundy, thus giving them a reason to support Edward in retaking his throne by force. The Plantagenet family ruled England until the Tudor victory over Richard III at Bosworth in 1485 during the 3rd Wars of the Roses.

A Brief Overview of Weapons at Towton

When most people think of medieval battlefields they think of armies fully covered in plate armour with the best swords and shields. But this was in reality only available to a very small percentage of the soldiers. Most of the soldiers were poor men and therefore could not afford armour, only a quilted jacket and a bill. This is a long staff type weapon derived from the agricultural bill hook. The bill consists of a hooked chopping blade with several pointed projections. The cutting blade curves forwards to form a hook, most would have had a spike straight off the top like a spear. This weapon had a good range for hooking and thrusting, and could be used for sticking in gaps and prising open armour.

Another weapon used at Towton was the longbow. Traditionally, English longbows are made from yew wood. The bow stave is cut from the radius of the tree so that the sap wood comprises two thirds of the bow while the heartwood is the remaining 3rd. This blend is good for giving the bow tension and compression and is deadly at both long and close range. Longbows had played such an important role in medieval warfare previously that a law had been passed in 1363 that made it compulsory for all men between the ages of 15 -60 to practise archery on Sundays and holidays.

A lot of different daggers and swords were used at Towton, including one and two handed swords and definitely the most useful – the hand and a half sword which can be used with two hands, or one if fighting with a shield or buckler.

War hammers and maces were used normally on giant war horses by knights, perfect for causing blunt and crushing injuries without getting stuck on impact thus unhorsing the rider. For these knights – the wealthy few who could afford it, the best plate armour was worn making them the medieval equivalent of a tank. Even on foot they were hard to stop. Primitive Guns were used also, although not very reliable and dangerous for anyone nearby, as they could explode in the hand of the shooter and often did.

All these weapons proved to be deadly. The injuries evident on the many skeletons found at Towton are harrowing proof of this.