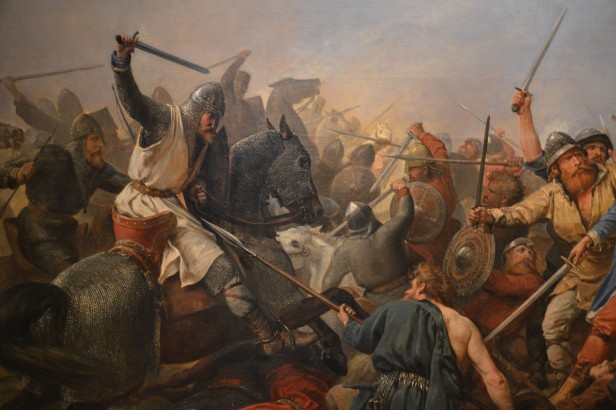 The Battle Of Stamford Bridge

The Battle of Stamford Bridge Society held their two day re-enactment event on the 20th and 21st September to commemorate the battle which took place in 1066. It was a battle that is called by many “the forgotten battle”. Not a lot of people have heard about it because it has been overshadowed by the battle of Hastings which took place just after.

I have found that if you mention Stamford Bridge to anybody, most people’s response is “is that Chelsea’s Football Ground in London?” I had the pleasure of meeting up with Chris Rock, the chairman of the Battlefield Society who has been working hard to protect, assess and find artefacts and provide battlefield walks. These walks take place on the 1st Sunday of every month, starting at the memorial and are open to all free of charge (donations appreciated). Here, he gives us a brief overview of the battle:

“King Edward the Confessor died on 5th January 1066 and left the crown of England open to dispute, at least two other foreign rulers lay claim, but it was actually given (some say taken) to Edward’s right hand man, Harold Godwinson.

Harold knew at least one man would challenge him and that was William of Normandy, who claimed Edward had promised him the crown after his death. Tostig, Harold’s brother had already been banished from England by Edward for the way he had ruled Northumbria. Eventually Tostig met King Harald Hardrada of Norway, another claimant to the throne, and finally got the promise of support to regain his Earldom back. William of Normandy meanwhile had decided the only way to get the crown was by invasion, so he began to amass a fleet and hoped to cross the channel before the winter storms set in.

It was Tostig and Hardrada who invaded first in early September 1066, they sailed along the east coast of England down to the Humber, raiding, burning and killing all opposition.

Harold meanwhile had a problem; his tough professional men, the ‘huscarls’, were only a small part of his army, the majority consisted of the ‘fyrd’ which was a draft deployment. They had been on call most of the summer but now needed to return home and gather the harvest for winter, so reluctantly Harold finally allowed them to do this. But, when Harold heard of the Viking invasion in the north he quickly summoned his army and fast marched over 200 miles in 6 days. Meanwhile on 20th September at Gate Fulford, just outside of York, the English Northern army was crushed by Hardrada and Tostig in a stunning victory. By the 24th of September, Harold and his army were near to York, when he discovered the Norsemen were to be at a place called Stamford Bridge the next day to receive hostages. He did not waste the advantage and planned a surprise attack to quickly end this invasion once and for all, before he had to return south.

The next day he fell upon the surprised Vikings who were lightly armed and totally bewildered by this army from nowhere. After retreating across the bridge the invaders set up a shield wall on the high ground overlooking the river, – this was a standard defensive tactic with overlapping shields protecting the men. Harold’s warriors attacked again and again, smashing at the wall with their axes, swords and spears, but it would not give. It was only after Hardrada received a fatal blow that the line faltered, but it still did not break. Some tired reinforcements arrived from the Viking camp at Riccall but the Saxons still kept up the attack, forcing the wall smaller and back onto flatter ground. Finally Tostig was killed, this was the turning point and with no will to carry on fighting the remaining invaders turned and fled. Harold’s mounted men chased them back to their ships. It’s said from the 300 ships that arrived, only 24 were needed to return them home.

Harold had won a brilliant victory, the Viking threat was more or less finished, but he had little time to celebrate, for he heard that William had finally landed on the south coast and was laying waste to his lands. Harold again marched quickly back south, only this time to his death and defeat at Hastings on October 14th. He really was the last great Saxon King of England, and but for him we may have been jointly ruled by both Normans and Vikings in a divided country.”

As Chris says, had the outcome been different, England would have been ruled in a completely different way. As with so many other battles in our country, our future was determined by the edge of a sword!

Legend has it that the bridge was defended by one giant Norseman who was said to be 7ft tall and built like a mountain. He defended the bridge by himself for hours against all Saxon attackers.

The bridge was not wide enough for more than two men to attack him at the same time or surround him. He was using a massive battle axe and killed all challengers, until one sneaky Saxon fighter went under the bridge in a boat or raft while the giant was engaged and stuck a spear through the bottom of the wooden bridge upwards into the Viking. The Saxons then managed to take over the bridge.

Nobody knows for certain if there is any truth in this tale but it’s a great legend to imagine!