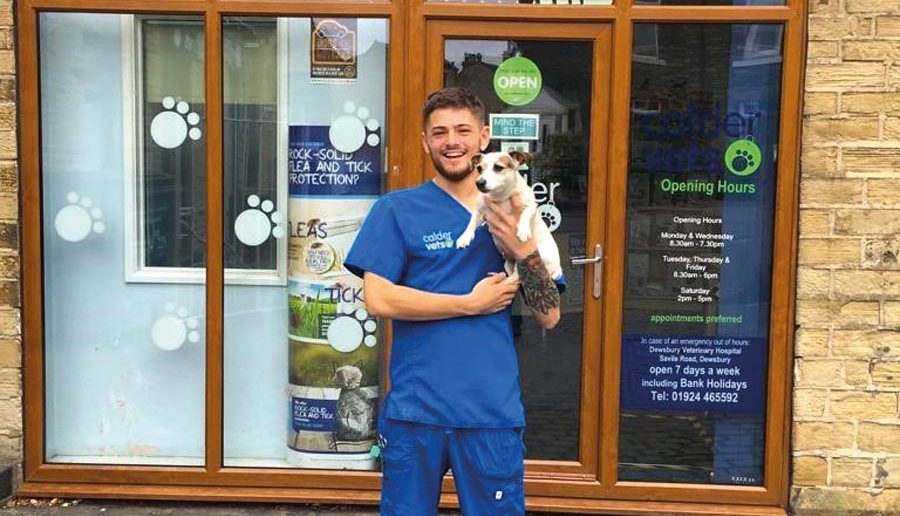 A delivery driver has been hailed a hero after he risked his life for a terrified terrier who had run away from home, strayed onto a motorway and then ended up on a 110-mile journey.

Maisie, a nine-year-old Jack Russell terrier, had become frightened during a thunderstorm and had run away from her home in Birmingham and ended up on the M42 at 2.30am

But she has now been reunited with her family thanks to Calder Vets’ Brighouse surgery and Chris Wilkins. Chris had been in his ‘Big Green Parcel Machine’ doing a delivery run when he spotted the petrified pooch and pulled over to the hard shoulder. He was shortly joined by a recovery truck driver who also wanted to help.

Their teamwork eventually paid off as Maisie ran under one of their vehicles and they were able to catch her.

Due to the lateness of the hour, and the fact he was in the middle of the shift, Christopher decided the best option was to keep Maisie with him while he made his deliveries, which eventually took him back to where he lives in Brighouse, Yorkshire.

The following day Chris’ wife took Maisie to Calder Vets, which has 13 branches across south and west Yorkshire, and she was scanned for a microchip by animal care assistant Matt Wright.

Matt said: “Thankfully Maisie’s owner had kept her microchip details up-to-date so I had a number to call. This really proves how vital it is to have your pet microchipped.

“I was expecting her to live nearby so I was absolutely stunned when I realised she had come from Birmingham, travelling a whopping 110 miles!

“Her owner had been frantic trying to find her, phoning around all his local vets to see if she had been taken in. I think he was stunned when he found out where Maisie’s adventure had taken her.

“Chris took a big risk stopping on a motorway to save Maisie but her owner will never forget what he did. He’s a real hero.”

Chris said: “I just saw this little white bottom in the middle of the road, holding up the traffic. I actually thought it was a rabbit but then realised it was a little dog running for its life.

“I have a terrier myself and I couldn’t bear the thought of this little one being hurt so I just acted without really thinking about it.

“Looking back on it now, running onto the motorway in the dark to rescue a dog isn’t the most sensible thing I have ever done, but I’m glad I did it.

“As I was on a delivery run, and it was the early hours of the morning, I thought the only thing I could do was take her with me.

“She was an absolutely adorable dog, even trying to sneak up onto my lap at one point. She was terrified by the storm which was taking place but she eventually managed to bed down in the truck.

“I am just thrilled to know she is back home in Birmingham where she belongs with her owner. I am so glad she was microchipped.”

Maisie’s owner’s mother-in-law and daughter made the five-hour round trip to pick the pup up, so she was reunited with her relieved owner that same day.