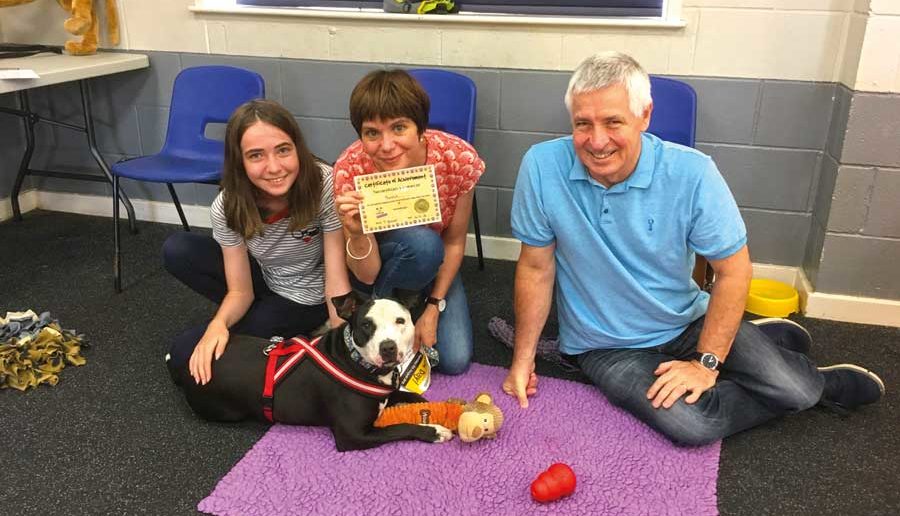 From Starving Stray To ‘Paw-Fect’ Student!

By yorkshire reporter on 02/10/2018 0 Comments
■ Bonnie pictured on Graduation Day with Kevin, Laura and Kate

A dog that was found starving and wandering the streets has found her forever home with a family from East Keswick and has proved every dog has its day.

Three-year-old Staffordshire Bull Terrier Cross, Bonnie, was found emaciated and in pain on the streets of Bradford in February this year. After being picked up by the dog warden she was taken to Dogs Trust Leeds where she received emergency veterinary treatment to help her get back on the road to recovery.

“She was in a dreadful state. She needed fluids as she was dehydrated and terribly underweight and her skin was covered in sores as she had chronic mange, a skin infection.

Luckily she started to recover once she was getting the treatment and TLC she needed and just a few weeks later she met the Traynor family, which was a dream come true.”

Kevin Traynor, his wife Laura and daughters Kate and Hannah had visited the York Road rehoming centre having decided they were ready to welcome another rescue dog into their lives after their Staffordshire Bull Terrier Cross, Mollie, from Dogs Trust Leeds, died just before Christmas last year.

“As we walked past Bonnie’s kennel, Kate and Hannah noticed that she just wouldn’t take her eyes off me. As I walked on, her eyes just followed me and that was it. The girls said she picked me! She had a coat on as she still had really sore skin and needed to put on weight but we just fell for her. She was gorgeous despite everything! When we met her we were so excited and so was she. She was really puppy-ish in her behaviour so it was no surprise that the team advised us to do training with her.”

Once living with the Traynor family Bonnie started to recover from her ordeal and after a few weeks they headed off to training classes with Dogs Trust Dog School Leeds.

“She has obviously missed out on a lot in life so we weren’t sure about how she’d take to training but we want her to get as much as possible out of the rest of her life. We headed off to Dog School so she could learn the basics such as how to settle if we were having a meal out for example, or coming back to us when called.

“She was brilliant; a great student and passed with flying colours! Now she comes everywhere with us and is loving life. She really proves that every dog deserves a second chance because despite everything she has been through, just a few months after she was found in such a terrible state she is a loving, trusting dog and she means the absolute world to us.”

To find out more about all the dogs waiting for their forever homes at Dogs Trust Leeds visit www.dogstrust.org.uk