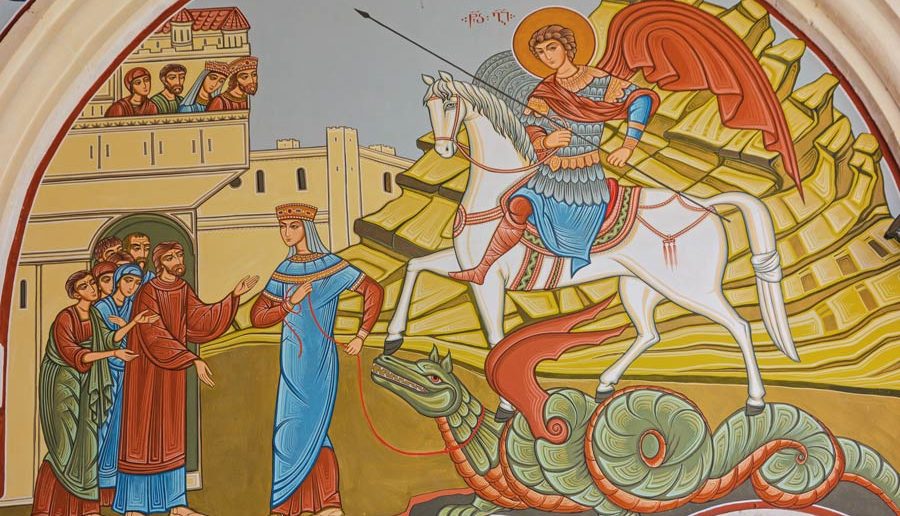 The 23rd of April is St George’s Day, when we celebrate our patron saint of England. The day brings out the patriotism in us all with the red cross of Saint George adorning clothing, accessories and even faces, our nation’s flag itself flying high and of course the iconic image of George slaying the dragon. There has been much debate over the years as to how we should mark the day, as many people feel it is not given the status deserved and passes pretty much unobserved in the wake of the huge St Patrick’s Day Parade and celebrations in Leeds by the Irish community for example.

To mark the day, our feature this month is all about Saint George – trying to separate fact from fiction, why we have a patron saint and how we celebrate.

WHY DO WE HAVE A
PATRON SAINT?

A patron saint is a canonised saint who has been assigned as a special intercessor with God, someone who can be our advocate and who we can ask for help or to pray to God on our behalf. Countries often have patron saints to call upon to save them from their enemies in times of great peril. A patron saint is also someone we should look to for example, and this is why in most cases the saint does not come from the country they are patron of – it is more about what they represent than where they are from. An exception to this is Wales’ Saint David who is actually from the country. St George stands for courage to face adversity, the triumph of good over evil and perhaps today this is more relevant than ever.

WHO WAS SAINT GEORGE? It is hard to distinguish fact from fiction when it comes to the life of St George, we do not even know when he was born, though is it widely accepted that he died around 303AD at the hands of the Romans. Born to a Christian family in Cappadocia (an area now part of Turkey) his mother took him back to her native Palestine when his father died. George is thought to have joined the Roman army where he rose to a high rank.

The Roman Emperor at the time was Diocletian who wishing to strengthen Roman traditions, revived worship of the old gods. In AD 297-298 he ordered all soldiers and administrators to make sacrifice to the gods, with any refusing to do so being immediately dismissed. In AD 303 he then ordered all churches and scriptures within the empire to be destroyed.

George of course refused to renounce his faith and is said to have torn up the Emperor’s order against Christians in protest. He was imprisoned and tortured but showed great courage, never once denying his faith in Christ. He was eventually beheaded in Lydda, Palestine. Ironically, it is also said that Diocletian’s own wife was so impressed with George’s resilience that she converted to Christianity and was executed for her faith too.

HOW DID GEORGE BECOME
OUR PATRON SAINT?

Stories of St George’s strength and courage spread throughout Europe and the earliest known reference to him in Britain is an account by the 7th century Abbot of Iona, St. Adamnan. We think he probably heard the story of George from a French bishop named Arcuif who had travelled to Jerusalem and Palestine. St George is also mentioned by Venerable Bede in his writings.

St George’s popularity here really began to pick up in the 12th century when returning crusaders claimed he had appeared to lead them into battle. This story is told on a stone over the door of a church in Dorset – the earliest known church in England to be dedicated to the saint. In 1348, Edward III founded the Order of the Garter and put it under the patronage of Saint George. Thus St George became regarded as a special protector of the English, our patron saint, and soldiers began to wear a sign of him on their chest and back. Edward IV and Henry VII built St George’s Chapel at Windsor Castle as the chapel of the order.

In 1415 the feast of Saint George was promoted to a major feast day following Henry V’s speech at Agincourt which invoked George as England’s patron saint. The English army of around nine thousand were vastly outnumbered by the 36 thousand French troops and the demoralised English fully expected to die that day. Therefore, following Henry’s rallying speech when the English were victorious despite the odds, Saint George was held responsible for coming to their aid – with many soldiers claiming to have seen him fighting alongside them on the battlefield!

“And you, good yeoman,

Whose limbs were made in England, show us here

The mettle of your pasture; let us swear

That you are worth your breeding; which I doubt not;

For there is none of you so mean and base,

That hath not noble lustre in your eyes.

I see you stand like greyhounds in the slips,

Straining upon the start. The game’s afoot:

GEORGE AND THE DRAGON

The image that most people have when they think of St George is of him slaying a dragon. This legend probably came from the Middle Ages when dragons were commonly used to represent the Devil. The story says that George killed a dragon on the flat-topped Dragon Hill in Uffington, Berkshire, and that where the dragon’s blood ran down, no grass will grow!

One version of the tale is in a book called The Golden Legend, written by Caxton in 1483. It tells that people of the town fed the dragon two sheep every day to stop it attacking them. The sheep began to fail, so they then started giving it one sheep and one man – who was chosen by lot. This continued until the King’s daughter was drawn in the lot. The king tried to get out of it but the townspeople were adamant that he should sacrifice his child just as many of them had. Passing by, George saw the girl in distress and asked what the problem was, she told him about the dragon and begged him to leave before it killed him too. The Golden Legend says,

“Then said S. George: Fair daughter, doubt ye no thing hereof for I shall help thee in the name of Jesu Christ. She said: For God’s sake, good knight, go your way and abide not with me,
for ye may not deliver me.

Thus as they spake together the dragon appeared and came running to them, and S. George was upon his horse, and drew out his sword and garnished him with the sign of the cross, and rode hardily against the dragon which came towards him, and smote him with his spear and hurt him sore and threw him to the ground. And after said to the maid: Deliver to me your girdle, and bind it about the neck of the dragon and be not afeard.

When she had done so the dragon followed her as
it had been a meek beast and debonair.”

The story ends with George promising to slay the dragon if all the people believe in Jesus Christ. The king, followed by all his people were baptised and George then killed the dragon.

There are several versions of this well-known myth!

HOW DO WE CELEBRATE
ST GEORGE’S DAY NOW? Once a celebration a widespread as Christmas, St George’s Day was demoted to a simple day of devotion for Catholics in England in 1778, following the change in religious beliefs after the Reformation. The public demand to reinstate it as a national holiday has grown in recent years as people feel our patriotism should be more widely recognised and celebrated.

Currently an ‘observance’ status, St George’s Day is generally celebrated with parades, dancing and the England flag of St George’s cross flying on buildings such as pubs. Some people choose to wear a red rose on their lapel and church services on the nearest Sunday often include the hymn ‘Jerusalem’ by William Blake.

However you mark the day on the 23rd, it will certainly feel like a very English affair, yet St George is also the patron saint of other countries including Portugal, Lithuania and Greece! Regardless though, he very much represents the epitome of English chivalry and all that we stand for. Happy St George’s Day to all our readers!