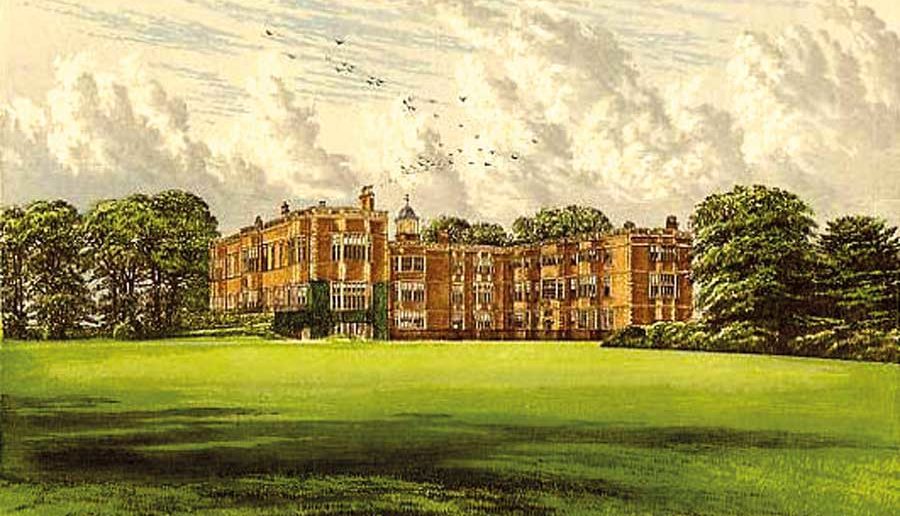 THE SOUND OF SHUFFLING, GHOSTLY FOOTSTEPS

Temple Newsam house in Leeds is not only famous, or infamous depending on your point of view, for being the birthplace of the ill-fated Henry Stewart, Lord Darnley, husband of Mary, Queen of Scots, and father of King James I of England and VI of Scotland; but also famous as one of the most haunted country houses in Great Britain.

I’m sure that all who grew up in the vicinity of the house can remember being told about the famous ‘blue lady’ who is said to walk the house and grounds ever since her untimely death in 1652 age fourteen. The ‘blue lady’ has been seen on several occasions and is said to have been Mary Ingram, daughter of Sir Thomas Ingram and his wife Frances, daughter of Viscount Fauconberg.

The story goes that Mary received a terrible shock after visiting friends in the vicinity of Barrowby, she was pulled from her coach by highwaymen and  everything of value was stolen from her. This proved such a shock that after this, in her short life she became obsessed with hiding her valuables all over the house, being in constant fear of being robbed again. This obsession made her young life a misery and she could only rest for short periods of time.

Mary’s ghost is described as wearing a blue dress and a loose flowing scarf, but these details were unknown to a man interested in the supernatural who in 1926 visited the house. He gave a detailed description of a girl who he had seen standing in a doorway dressed in the fashion of the upper class during the time of Charles I. One of the most interesting points about people who have seen her, mention that she has a small scar over her right eye. It is not seen in her portrait and maybe a result of the violent attack she endured by highwaymen. However, those who say they have seen her have noticed the scar.

Not only is there a ‘blue lady,’ but also a ghost of a ‘white lady’ said to be Jane Dudley a ward of the Countess of Wessex. Lady Jane was said to have been in love with Henry Darnley and on receiving the news of his pending marriage to Mary Queen of Scots, she hung herself with her girdle. The apparition is said to  wear a lace cap, a small ruff and a white robe, and haunts the parts of the house that date back to the 16th century. The story is related in a book on the history of the Lennox family to which Henry Darnley belonged and was published in the reign of Charles I.

Jane Dudley’s ghost appeared on several occasions during the 18th century, and a servant of the house in 1735 was so startled at seeing her that she fell into convulsions and it was some time before she could be brought round and comforted. Another sighting took place in 1891 when an elderly servant gave a detailed description of the clothing worn by the apparition and matches the account in a book published in 1751.

The murder of serving girl Phoebe Grey in the house gave rise to the apparition of her killer, William Collinson also employed at the house as a servant and said to be in love with her. The year was 1704 and celebrations were underway at the house with a bonfire, food and drink after the news of the victory of the Duke of Marlborough at the battle of Blenheim. Young Phoebe happened to be in her bedroom when Collison appeared at the door. Apparently his ‘advances’  were rebuffed and in rage he strangled her and then dragged her lifeless body to a well inside the house and threw her down it.

Collinson’s ghost has been seen a few times in the 18th and 19th centuries and twice in the 1930s. Many years ago, a serving girl at the house described seeing an apparition believed to be Collinson dressed as he would have in his lifetime. The description of his clothing coincides with details as written in a book of household accounts in a collection in Leeds Reference Library.

Another account given by a Mrs Dare the wife of the man in charge of the house in the early 1930s, describes the clothing worn by the apparition and matches that of the description given by the serving girl many years before. Those who have slept in the house tell of the sound of something being dragged across the bedroom floor believing it to be a body. These accounts have always been accompanied by ‘shuffling’ footsteps thought to be those of William Collinson as he dragged his unfortunate victim, Phoebe Gray across the bedroom floor to conceal his crime and dispose of her to a watery grave.

After missing Phoebe for quite some time, her body was eventually found down the well. The prime suspect was Collinson who had been seen by one of the servants near Phoebe’s bedroom on the night she vanished. Collinson eventually confessed to murdering her and he was hanged in York.

There is in existence a pamphlet with the long-winded title:

‘The last dying speech and confession of William Collinson,

a manservant at Temple Newsam seat of Viscount Irwin,

who was hanged for the murder of Phoebe Gray,

a maidservant at Temple Newsam.’