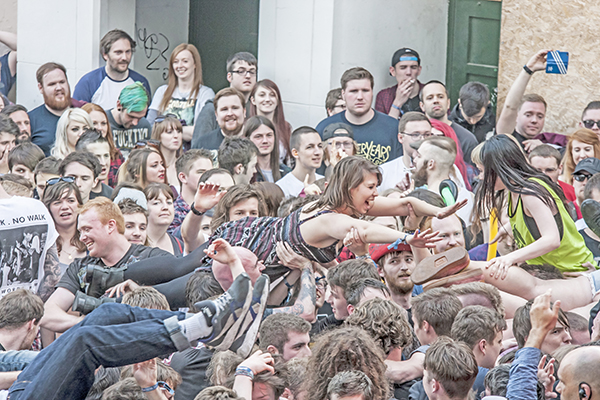 What better way to celebrate your tenth birthday by taking over half of the city centre and at the same time return to your roots: Slam Dunk Festival the annual music festival, which evolved from alternative punk/emo/ska night held weekly (Tuesday) at the city’s sadly missed Cockpit music venue did just that.

Initially held in the city’s Millennium Square in 2006, the event moved to the student union of the University of Leeds in its second year. You may have to wait until October for the 2006 festival headliners to return to Leeds when Fall Out Boy play Leeds Arena: You may have forgotten about The Academy Is. But 2015 saw some old friends, regular friends return to Slam Dunk. You Me At Six return for the fifth time. They have come a long way since 2008 when they were third on the main stage and indeed when they last headlined in 2009. In 2015 they were the fitting climax to the 10th anniversary party. Almost over shadowed by the rather fabulous Reel Big Fish who headlined in 2007.

Surrey quintet YMAS, former teen pop-punkers turned seriously bearded rockers with a No 1 album in 2014 and a clothing line. A tomfoolery-free zone, they focus determinedly on the dark art of making awful songs stuffed with clichés (No One Does It Better, Be Who You Are) and no distinguishable features, but which work in huge arenas. Their music runs the gauntlet from nondescript to quite painful, but once they are dressed up with pyrotechnics and blasted out at earthquake volume, their army of fans bellow along and climb on each other’s shoulders.It’s a curious spectacle. YMAS – once deemed “terrible” by indie duo Blood Red Shoes – are British rock’s Millwall FC: nobody outside their fan base likes them, but with followers this enthusiastic, they probably don’t care. Reel Big Fish’ played crowd pleaser after crowd pleaser. Including hits such as ‘I Want Your Girlfriend To Be My Girlfriend’, ‘She’s Got A Girlfriend Now’ and ‘Suburban Rhythm’, which was repeated in different styles of music as Aaron Barrett got the crowd to join in with different actions. Few included, creating a circle pit the size of the room and line dancing, as a country rendition was played. It was a refreshing performance to see a band, bouncing around and enjoying the show as much as their fans. For those few hours the venue seemed to be transformed into a teen party from the nineties. Even with the little room to move, everywhere you turned there were people of all ages skanking to their favourite songs. Original member Aaron Barrett, lead vocals and guitar, stole the show with his Hawaiian shirt and banter with long standing friend, Dan Regann, on trombone.

The two of them made the crowd laugh with their adolescent jokes and slapstick approach to being in front of an audience. Sweat was now pouring off both band and crowd as they finished the final few songs such as the almighty hit ‘Beer’ and ‘Trendy’ before going off stage to prepare for the encore. This is what many fans had been waiting for, the cover of ‘Take On Me.’ Camera phones could be seen all around as the hit from the film ‘Basketball’ was performed with as much energy as the band had when they had first approached the stage.