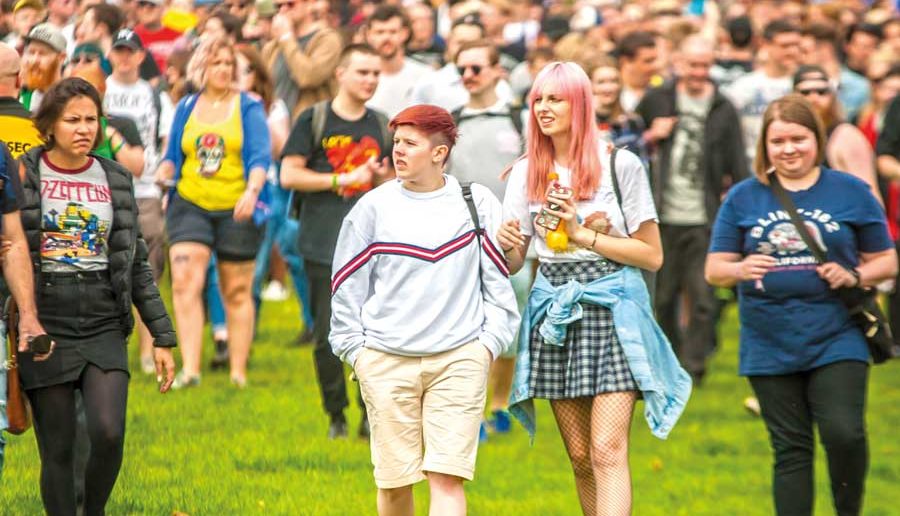 Delivering the ultimate one-day alternative festival celebration, Slam Dunk Festival took a whole new stride into 2019 with its most ambitious and exciting weekend to date – lead by an incredible list of names and a huge move to Temple Newsam Park in Leeds.

Leading the charge as headliners in 2019, Baltimore favourites All Time Low truly stood apart as the biggest pop-punk bands on the planet. Across seven studio albums, their infectious blend of singalong anthems and beloved hooks have shone through – filling arenas and delivering again and again with a live show that was a must-see for all. With seminal albums ‘So Wrong, It’s Right’ and ‘Nothing Personal’ defining a generation, and latest album ‘Last Young Renegade’ marking an exciting new chapter for them, All Time Low’s exclusive Slam Dunk headline shows celebrated a game-changing band in their prime.

Nostalgia often lights the pathway to the future. By returning to those warm feelings of wide-eyed wonder from childhood, bottling them up tight, and distilling them with years of wisdom, evolution becomes seamless. On their seventh full-length album Last Young Renegade (first with new record label Fueled By Ramen), All Time Low took the next step on a journey they began back in their hometown of Towson, Maryland during 2003. Alight by analog synthesizers, cinematic soundscapes, and a lyrical journey lived through the eyes of a character known as the “Last Young Renegade,” the chart-topping platinum-certified quartet—Alex Gaskarth [lead vocals, rhythm guitar], Jack Barakat [lead guitar, backing vocals], Zack Merrick [bass guitar, backing vocals], and Rian Dawson [drums]—looked back in order to move forward. The “Godfathers of Pop-Punk” themselves New Found Glory also made a hotly anticipated return to Slam Dunk in 2019, bringing the sort of arsenal of hits that had thousands ecstatic from start to finish – despite the unexpected rain. From ‘My Friends Over You’, ‘Hit Or Miss’ and ‘Head On Collision’ to ‘Dressed To Kill’, ‘All Downhill From Here’ and ‘Kiss Me’ – their set at Slam Dunk proved why they remain untouchable at the top. Dazzling in technicolour, Waterparks also emerged as a true phenomenon in pop-punk over the past bringing their infectious and fun-filled sound to the festival party.  Their second album ‘Entertainment’ stormed its way into hearts earlier this year, and their momentous moment at Slam Dunk 2019 was a celebration of a band embracing the future.

Hot Milk are an emo power-pop duel fronted band from Manchester, England. Jim and Han met in a bar in the Northern Quarter in 2016, became fast friends and have lived together ever since. What started over a bottle of wine and an acoustic guitar in their living room, whilst it poured it down outside, quickly became their vice and way to survive through everyday life. The Manchester weather coupled with their persistent desire to fill a meaning-shaped hole meant that one song quickly turned into fifteen after running home from work during lunch breaks and staying up all night.

Always pushing boundaries, alt-pop phenomenon Lights never shied away from the Slamdunk challenge. Through her first three records, Lights built an incredibly passionate fanbase, selling out tours around the world. Yet through this success, she felt like she had more important things to say through her music but just didn’t know how to get them out. Thus, was born Skin&Earth, the Canadian singer’s fourth record. Lights was a creative, enthusiastic force at her first big festival. So did UK born singer songwriter Lizzy Farrall who was sublime on the paradoxically called Acoustic Stage!

Twenty years into its pioneering journey, Gainesville, Florida., natives Less Than Jake also had their fair share of moments. For a band obsessed with interacting with its fans, both online and after shows; for a band that is so concerned with making sure the fan gets the perfect experience, with well-known hijinks in every live performance; for a band with seemingly unlimited creativity.  Less Than Jake is still making cannonball-sized splashes in the deep: Which also describes the secret surprise set played by Busted. Once word got out thousands flocked to see them. Call it nostalgia or call it a wonderful new home for Slamdunk welcome gift.