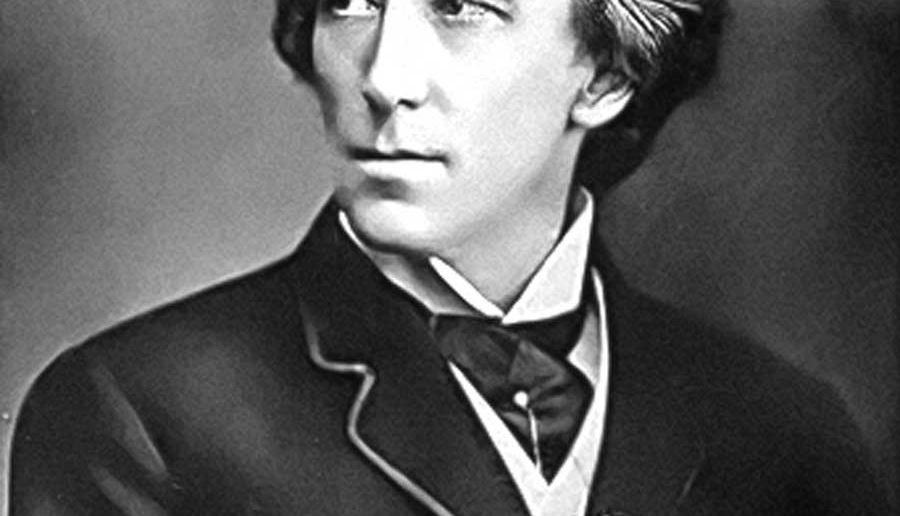 His name is still revered, once described as the ‘Olivier’ of his day winning admiration from his colleagues and fellow actors here and in America. On October 13th 1905 when the curtain fell on that fateful night at the Theatre Royal in Bradford, nobody realised that Sir Henry Irving had made his last appearance in Tennyson’s ‘Beckett’ and it would also be the last time the great actor would grace any stage. His final words in the play seemed prophetic if a little ‘theatrical’:

He returned in a cab to the Midland Hotel where he was staying, arriving at 11:15 and was helped into the hall by his valet, Walter Collinson and sat on a couch. It was soon seen that he was quite ill and medical help was summoned, but it was too late, the great actor collapsed and died.

Henry Irving’s real name was John Henry Brodribb born at Keinton Mandeville near Glastonbury in Somerset in 1838. He lived with his parents for a few years before being sent to live with an aunt at Halsetown near St Ives in Cornwall until he was ten years old.

Later, he was sent to the private school of Dr Pinches in Lombard Street for a couple of years devoting all his leisure time studying drama. A little later he went to work as a clerk for a firm called Thacker and company who were East India merchants in Newgate Street who promised him ‘fortunate prospects.’

He might well have gone to India as a representative of the company, but decided he had other ’fish to fry’ seeing his future not as a clerk, but as an actor. This was to be his life, and he began to study Shakespeare and the old comedies, reciting their scenes. He went to Sadler’s Wells Theatre when he could and absorbed all the lessons that watching a play acted by Samuel Phelps and other great actors of the day could teach him and even went to elocution lessons.

In 1845 he was introduced to William Hoskins, leading member of Samuel Phelps company at Sadler’s Wells and soon afterwards was given lessons in the art of acting by Hoskins who began to admire him as he progressed.

In September 1856, Irving made his first appearance at the Lyceum Theatre in Sunderland as Gaston, Duke of Orleans in Lytton’s ‘Richelieu’ and was then billed as Henry Irving which he later assumed by royal license and in the ten years between 1856 and 1866 he fulfilled various engagements in the provinces. Mostly in Manchester, Liverpool, Glasgow and Edinburgh.

Irving worked with some of the most famous thespians of the day, including the great Ellen Terry. This actress had made a big impression on theatregoers and players alike, particularly as Olivia in William Willis’ play of ‘The Vicar of Wakefield’.

Irving began his first season in ‘Hamlet’ with Ellen Terry as Ophelia. This was a triumph for the pair and ran for a long time. Short engagements at the Haymarket, Drury Lane and other venues followed. Irving’s first really great success was ‘The Two Roses’ at the Vaudeville Theatre in June 1870 running for three hundred nights.

Within about three years he was seen in ‘Eugene Aram’, ‘Charles I’, Richelieu’ and in ‘Hamlet’ and several other Shakespeare plays where he was recognised as the greatest actor of the age and in 1878 he also took over the management of the Lyceum creating a new beginning for the theatre. The productions were excellent, good scenery, dressing and accessories going hand in hand with good acting.

During several visits to America, he was not only accepted as the greatest actor of the time, but as an ‘ambassador’ between the two nations where he was welcomed by all classes and received special marks of appreciation and respect at the hands of the President and the nation’s most famous men of the time. It’s difficult to think of anybody of the world of the stage who possessed the all -round versatility of Irving who in comedy could be as whimsical and light and airy as in a drama. In 1895 he was knighted by Queen Victoria as well as receiving honorary from the universities of Cambridge, Dublin and Glasgow.

He remained manager of the Lyceum until 1899, when the theatre passed into the ownership of a limited liability company. Soon afterwards ‘Robespierre’ was produced in which he appeared after a long illness. One of his last performances in London was as ‘Dante’ at the Drury Lane Theatre.

It’s generally accepted that playing the part of Mathias the burgomaster in ‘The Bells’ hastened his untimely death. As early as 1892 his doctor advised he should not put too much strain on his heart, but ignored the advice and carried on in the play. His leading lady in several parts, Ellen Terry asked:

After a brief hesitation he answered, snapping his fingers:

He was known as a generous man, privately interested in the Salvation Army and would often give money to those in need and the homeless in the harsh and sometimes cruel world of Victorian London. Friends of his were sometimes recipients of money that they would handover to various charities, saying:

“No name, call me a friend or a well-wisher.”

After his death, many leading actors from the English stage petitioned to the Dean and Chapter of Westminster Abbey and he was laid to rest amongst the many great names of by-gone days.