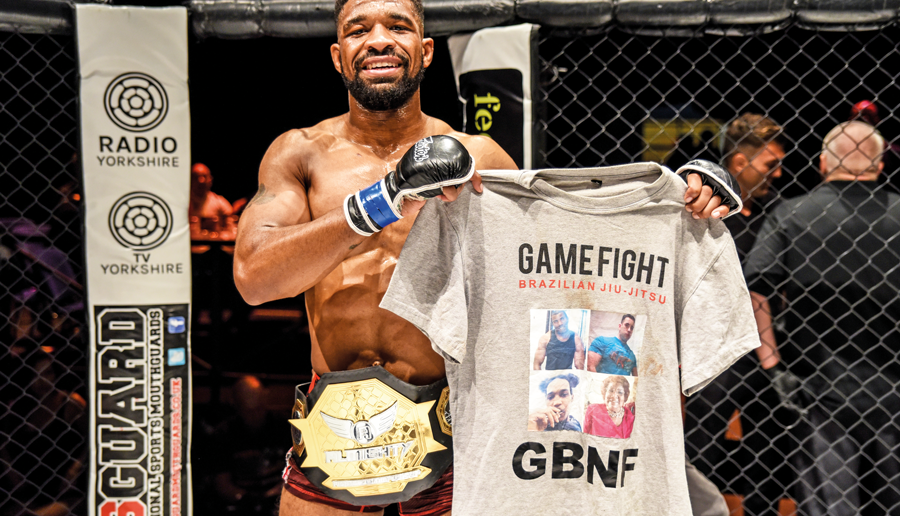 Almighty Fighting Championship have a new amateur lightweight MMA champion in Simeon Ottley. 27yr old Simeon from the Chapeltown/Meanwood area of Leeds won the unanimous decision over Moldovan Nicolae Pirogan after 5 rounds to take the lightweight belt during the recent event held at The Barbican in York.

I caught up with Simeon to congratulate him on his win and find out a little more about his fighting career to date – and where he goes from here.

He first began training at the age of 18 in Brazilian Jiu Jitsu, attending what was then True Spirit Gym under the tutelage of Mabsy. He also attended MMA classes at the gym and took part in his first amateur MMA fight aged 21, fighting at welterweight. He trained hard and enjoyed the sessions, but it was simply a hobby to him at this point. Simeon says of this time, “MMA saved my life. It kept me out of trouble and off the streets. Mabsy was a big influence on me and the training meant I had no time to think about anything else.” He continued to fight in MMA bouts on a regular basis, racking up several wins, until disaster struck, and he was left with an injury which put him out of action for a full year. Suffering a dislocated elbow during a fight, Simeon was unable to continue, and the fight went down as a loss on his record. He says, “The injury hit me hard. As well as the physical pain, and being unable to train for so long, I had to come to terms with my first loss. You never know how you will react until you do get a loss and I certainly didn’t like the feeling!” Simeon continues “The injury made me take what had once been a hobby more seriously. I was determined to come back stronger, fitter and ready to put all my skills to good use.”

By this time, Mabsy had opened Game Fight UK and Simeon followed him. Once his injury had healed he returned to training every day. Simeon dropped from Welterweight to Lightweight and since his return has had five wins in a row with no more losses added to his record. Now taking the sport further, Simeon also decided to add more strings to his bow with improved striking to his already proficient BJJ game. In addition to training with Game Fight UK MMA coaches Andy and Aaron, he takes specialist boxing coaching from Nick Manners, and Thai Boxing training from Kiatphontip.

The sport is an expensive one to be involved in and Simeon is now preparing to fight pro. In between all the training sessions, he works as a delivery driver for his Dad’s food business, but as he puts it “I need to make the move to pro now. I have enjoyed fighting at amateur, but it doesn’t pay, and I need to earn money to provide for my daughter Rameya age 9.” Surely, with such dedication and hard work it is now time for Simeon to reap the rewards of the skills he has learnt. Combined with the natural talent and strength he possesses, the move to fighting pro should be a smooth one for him.

Simeon’s pro debut fight versus Kieran Lister is on the next Almighty Fighting Championship card. The event on 17th November at the York Barbican is set to be an exciting one!

Simeon is looking for sponsorship deals from companies, if you are interested in sponsoring him he can be contacted at
simeonssj@gmail.com