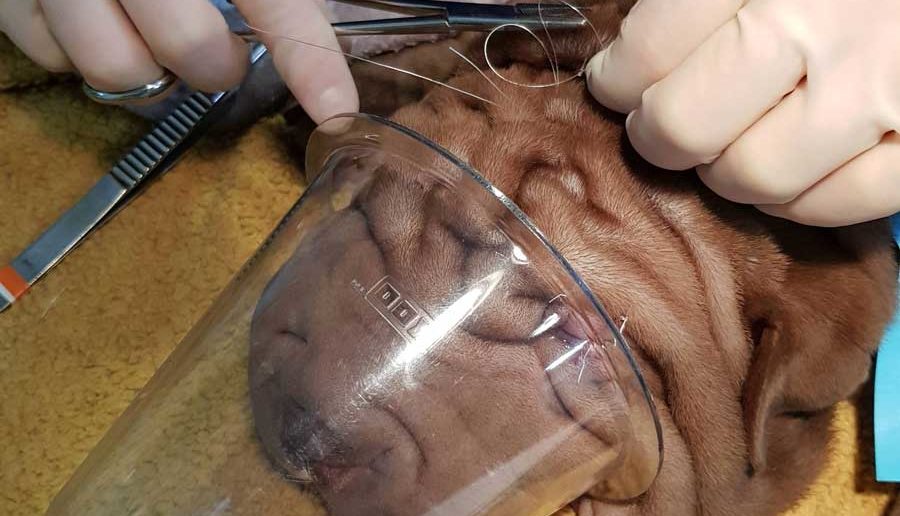 Vets in Yorkshire have provided an eye-raising remedy for a suffering Shar Pei puppy who was in danger of going blind.

When five-month-old Coco was taken to Calder Vets in Dewsbury for her first vaccinations, her owner Kerryanne McCann mentioned she was concerned she had an eyesight problem.

Vet Claire McAneny quickly confirmed that Coco had an entropion in both eyes – which means her eyelids were folded in towards her eye, causing her eyelashes to grow inwards and scratch her eyes.

Left untreated, the condition can cause painful ulcers and, in severe cases, blindness, so Claire advised swift treatment in the form of a ‘facelift’ and three days later Coco underwent surgery.

Claire explained: “Shar Peis are particularly prone to these sort of eye problems because they have a lot of folds of skin on their face. All owners should be vigilant for any weeping or redness of the eyes.

“If it is overlooked or ignored, the dog could go blind but if it is spotted early the remedy is fairly straightforward, especially in young pups.

“Ideally this procedure should be performed no later than 10 to 12 weeks of age to increase the chance of a positive outcome. Although Kerryanne took Coco on after this prime time, thankfully she was quick to recognise something wasn’t quite right with her eyes.

“First we cleaned both her eyes with dilute iodine and then we carefully inserted nylon stitches to hold back the skin around both eyes.

“We also added a stitch in her forehead to hold back more skin there and help keep her eyes clear and clean.”

Following the surgery, Coco has returned home to Kerry in Batley and is back to her normal self.

“The operation went smoothly and Coco woke up brightly and was able to see properly straight away – and it was very clear she was really happy about this!” added Claire. ‘Eyelid tacking’ is often a temporary fix and after discussion with Kerryanne, it was decided to perform this less invasive procedure as Coco still has a lot of growing to do.

“The hope is that as Coco grows, the bones in her skull will stretch out her skin folds and they will not be so heavy that they cause the entropion again.  It’s not uncommon for a more permanent surgical procedure to be performed again once fully grown if the folds don’t stretch out enough,” said Claire.

For more information about Calder Vets, which has 13 practices across Yorkshire, visit www.caldervets.co.uk