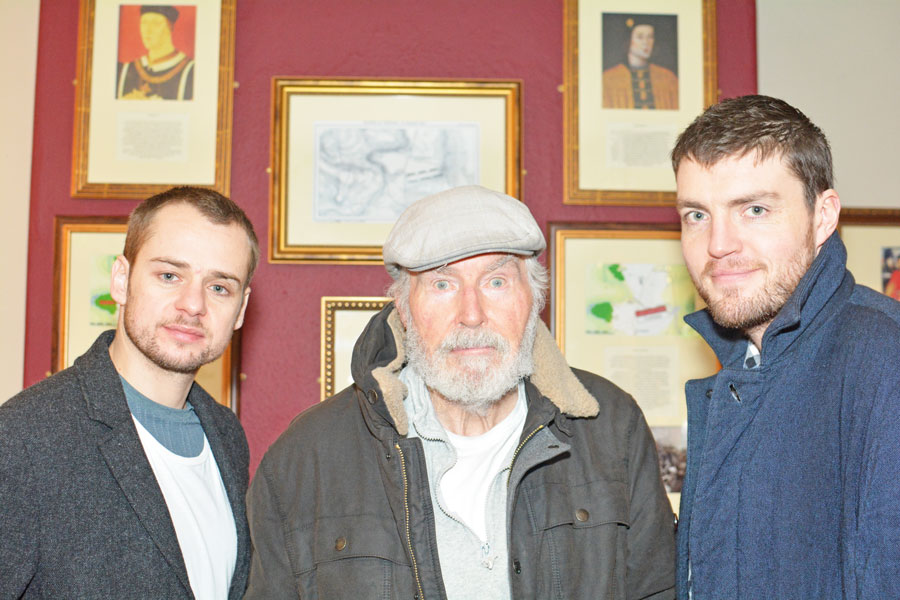 This month marks the 400th anniversary of the death of William Shakespeare. Famous for his writings including his Tragedies and Sonnets, perhaps amongst the most famous were his Histories. Shakespeare documented in his own unique style some of the history of England and particularly the Wars of the Roses. These plays have been made into many popular films over the years including the infamous portrayal of Richard III by Laurence Olivier in 1955.To mark the anniversary of his death on April 23rd 1616, the Shakespeare Globe Theatre in London commissioned a series of short films to be produced which will then be shown on 37 huge screens stretching along 2.5 miles of the South Bank in the city over the weekend of April 23-24th. All the films are scenes from his Histories and they have been filmed in the actual locations where the historical events took place.
One of these short films was shot right here in Yorkshire, on the Towton Battlefield and along with our historian Gareth, I was lucky enough to be present during filming and have a chat with the actors. We had a chat about Shakespeare, acting and the dismal Yorkshire rain that they unfortunately encountered on the day!
The scene filmed at Towton is from Henry VI part III and in true Shakespeare fashion, tells the tragic tale of a father and son who in the midst of the battle, kill each other without realising, until it is too late! The parts are portrayed by real life father and son David and Tom Burke. David Burke is most well-known for playing the part of Dr Watson in the Adventures of Sherlock Holmes. He was much loved in this role, and eventually left to join the Royal Shakespeare Company. His son Tom is renowned for his part as Athos in the highly popular TV series The Musketeers. He has also featured in Great Expectations, Casanova, Poirot and most recently in the drama series War and Peace.
David Burke said of the local area, “Lead Church is beautiful, what a gem! And to think it was there at the time of the actual battle is incredible.” I asked him how it was to work with his son to which he replied “it is wonderful to work with my son – I am incredibly proud of him. It also helps with our roles today as we have that natural rapport and chemistry which will hopefully shine through in our performance.”
I spoke to Tom about filming the Shakespeare piece, and the difficulties people (myself included) sometimes have with the language when watching a Shakespeare play/film. He said “he is a very interesting writer, morally and immorally! It is quite fun to engage in the language – it’s a challenge to communicate through acting not in our modern language. As an actor, you have to portray emotion and sentiment which hopefully the audience can understand regardless of the language used in the dialogue.” I pointed out that Tom has appeared in a lot of historical dramas during his acting career so far, was this intentional? He replied “I have not gone out of my way to do historical things, it is just what’s happened. I go with the most interesting story and this is often a story from the past.”
Also appearing in the film at Towton is actor Alex Waldmann. Alex is a member of the Royal Shakespeare Company and received high praise for his portrayal of The Bastard in King John. He added “School has ruined Shakespeare for a lot of people. It is meant to be performed, not studied as a text! If you can’t understand and enjoy a Shakespeare play it is the actors fault- they are supposed to portray the character in such a way that you can understand what is going on via emotion and feeling.”
The group couldn’t have picked a worse day for filming. It was cold, windy and pouring with rain, so I asked them what they thought about Yorkshire with a smile on my face as they were all drying off in front of a roaring fire at the Crooked Billet. Their diplomatic response was “The weather is disappointing but the area looks lovely. We will be sure to visit again in the Summer!”
Hopefully the weather in London will be fine for this fitting tribute to our most famous playwright. The event is sure to be spectacular, and here at the Yorkshire Reporter we are glad that Yorkshire had the opportunity to play a part!