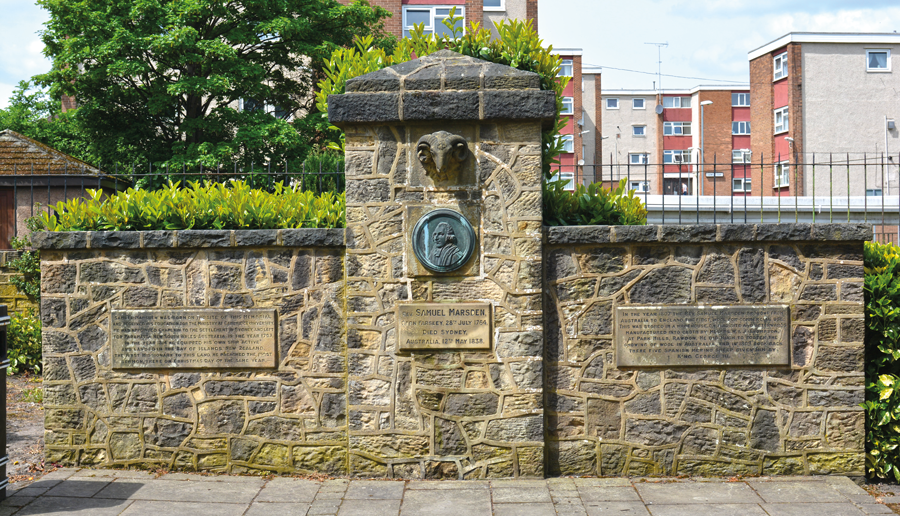 It needs to be said that several men of the Church are owed a debt of thanks by the textile trade. Men such as William Lee who devised the knitting machine about 1589, and Edmund Cartwright the inventor of the first wool-combing machine predecessor of the modern power loom. Most of all however, gratitude should go to Samuel Marsden without whose pioneering work in the Australian wool ‘growing centres,’ good worsted cloth might never have been known.

Samuel Marsden was born in Farsley near Leeds in 1765. There are differing accounts about his early years. Some say he was apprenticed to his father Thomas as a blacksmith, and some say that it was his uncle he became apprenticed to. Whatever the reality was, it appears that he did have a basic education in Horsforth delivered by the vicar of nearby Rawdon, the Reverend Stones. He may also have been a pupil of Hull Grammar School. At University, once again there are differing accounts as to which of the colleges he attended. It is known however, he left Cambridge in 1792 without graduating or obtaining a degree.

In 1793, he was ordained by royal mandate, and appointed by special commission, chaplain to the new penal colony at Parramatta near Sydney, Australia.

He arrived at Botany Bay in 1794 and immediately devoted himself not only to his spiritual duties, but also to the commercial interests for the settlers. He was instrumental in the building of several churches and schools as well as being active in establishing the ‘Model Farm’ of Sydney for the rearing of sheep.

It is of course the connection between Marsden and sheep that Yorkshire folk are interested in, and to the woollen and worsted industry in general. On a return visit to Yorkshire in 1807  he brought with him the first  bag of wool from Australia to be used commercially in this country and left it with  his nephew John Marsden a Leeds hosier. The wool of course was rather ‘smelly’ and dirty and full of animal fat and at the time the local woollen manufacturers wouldn’t touch it. The wool was discarded onto a dung heap and later retrieved by a rag-gatherer who then sold it on to someone called ‘Johnnywell’ Thompson a member of a Rawdon company of woollen manufacturers.

The firm was so pleased with the wool that they instigated a search for its origin. For many years these manufacturers would only use wool that came regularly from New South Wales. The circumstances reached the ears of the Prime Minister, Lord Castlereagh and he became instrumental in introducing the Reverend Marsden to King George III. The king straightaway ordered a suit of clothes to be made from the first cloth manufactured out of Australian wool in 1809. The king also presented Marsden with five Spanish merino sheep and one ram for the ‘Model Farm’ in Sydney taken there in 1810 from which date marks the Sydney wool trade.

In 1814, Samuel Marsden journeyed to New Zealand to Christianise the native population of the Northern Island. He took with him horses, sheep, and cattle. He was the first white man to be successful in teaching agriculture, religion, and the arts to the natives. In addition to spiritual teaching, Marsden also instructed the natives on how to rear sheep in the Northern Island of the country from which came the great growing settlements producing wool for distribution around the world. He later returned to Australia, but continued his interest in New Zealand, and between 1814 and 1837 he supervised missionary operations there several times.

At Parrammata he became a magistrate as well as concerning himself with the welfare of the convicts. He recommended allowing the wives of convicts to accompany their husbands from England to Australia, receiving criticism and opposition from fellow magistrates and the Governor. Marsden’s friends were disappointed when Sydney was made into a bishopric, and the Reverend Marsden was passed over in favour of a Doctor Broughton. Marsden took this lightly, the church wasn’t his whole life.

Life wasn’t a bed of roses for him with Government officials and his Australian peers recognising him as being cruel in administering punishments, and his harshness is well documented and he was given and the nickname the ‘Flogging Parson.’

Samuel Marsden, missionary, clergyman, magistrate, Woolman died in 1838  and buried in Paramatta. Back in his birthplace of Farsley, a stained glass window in the local church was installed and also a memorial in the churchyard. In 1934, Farsley Urban District Council built a walled garden on the main street near to his birthplace and installed another memorial to him.