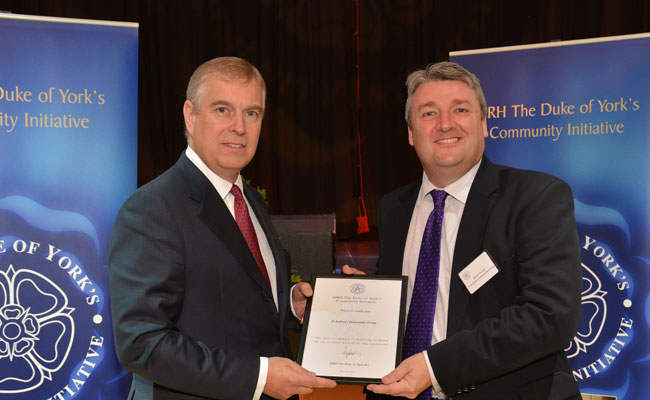 St Andrew’s Pantomime Group is among forty Yorkshire based community groups to have had their work recognised by a major royal award scheme.

The Duke of York’s Community Initiative is presented annually to community groups and charities from across the whole of Yorkshire who, following rigorous assessment, are deemed to be: “of real value to the community, well run and an inspiration to others.”

Last year’s award ceremony, which involved organisations from major cities such as Wakefield, York, Beverley and Leeds as well as a number of much more rural projects such as Tockwith Festivals, Wilberfoss in Bloom and Sight Support Ryedale was attended by over two hundred award holders, assessors and guests.

Speaking at the event HRH the Duke of York talked of how over the years the Initiative had sought to extend its remit so that now it not only recognises and rewards outstanding community work but in so doing seeks to enhance society by encouraging award holders to continue to do all they can to break down barriers between both organisations and people.

Picture shows Simon Forster, Chairman of the Group receiving the Initiative’s citation from HRH the Duke of York at a special award ceremony at Bridlington Spa’s Royal Hall.

The Duke of York’s Community Initiative is open to all Yorkshire based community groups. To find out more visit http://www.thedukeofyorkscommunityinitiative.org.uk/