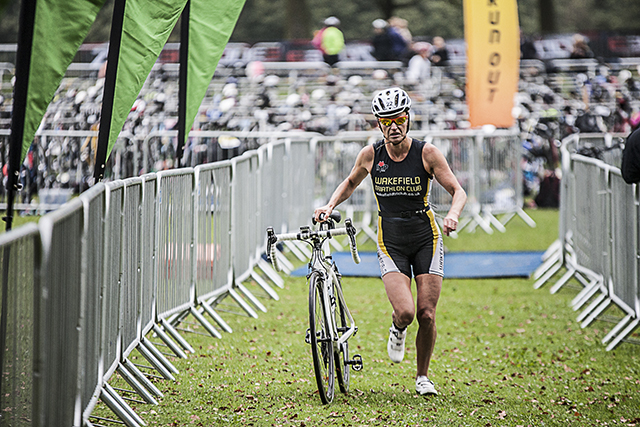 This challenging event started off with a jump into the freezing cold lake at 8am. You may ask who would want to do this followed by the swim, then a twenty mile bike ride and finally a three lap run around the whole of the park, nearly 400 triathletes did with crowds of spectators cheering and encouraging them all the way to the finishing line.

Both sprint and standard distances were available to triathletes. The 1500m or 750m swim took place in the open calm and clean water of Roundhay’s Waterloo Lake. The triathletes then headed to the transition area situated in the centre of the park to start the cycle leg of the event. The cycle 44km or 24 km ride was a picturesque yet challenging ride taking the triathletes out towards Wetherby and then back through East Keswick and back to Roundhay Park.

Competitors then finished with a 9km or 6.4 km run around the amazing setting of Roundhay Park crossing the finish line on Middle Walk with the Mansion House behind them.

After putting in the third fastest run of the day, Matthew Sharman crossed the finishing line first claiming the title of Sprint Distance Winner, with a fifteen second gap in 01:19:02.

Jonathan Dudley (Wetherby Runners) came in narrowly second with a time of 01:19:17, Dudley was posted with the fastest swim and maintained his lead throughout the cycle leg but couldn’t hold off Sharman on the run. James Dean came third with a time of 01:20:18. Claire Cooke (Sheffield Tri Club) took the women’s title in 01:36:38 with a very strong run, runner up Johanna Winks finished in 01:37:09 ahead of Anna Hobbs (Valley Striders Cc) in 01:41:16.

Luke Pollard (RAF Tri Club) took home the title of Leeds Triathlon Standard Distance winner with a time of 02:08:38. Pollard’s impressive swim and cycle time set him apart from the rest. Richard Ebbage (Royal Navy Tri Club) came in second with a time of 02:13:27 a quick run and fast transition helped him cross the line just ahead of Charles Hickman (Leeds Bradford Tri Club) who finished third in 02:13: 50.

In the women’s field Jenni Muston (Jackpot Racing) defended her title from last year in a time of 02:33:59, after exiting the swim in 5th place, a strong performance on the bike and run set her into the lead. Sarah Cammidge (Sheffield Tigers Tri) finished second in 02:40:59, Cammidge was first out of the water after a strong swim. Claire Hebblethwaite (Knutsford Triathlon Club) was closely following and took third place in 02:41:28.