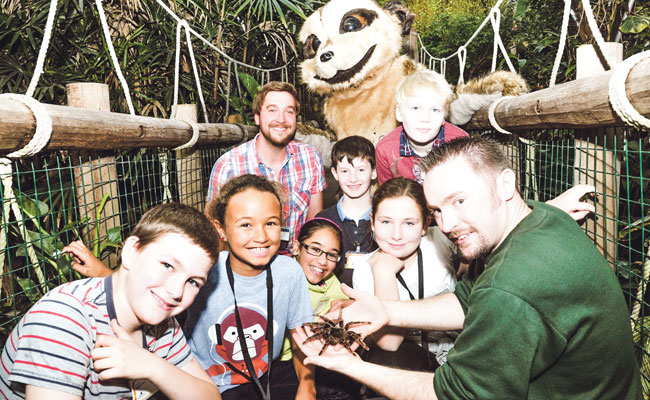 It was a day never to forget for six Leeds school children, as they helped call the shots at one of the city’s most popular parks and tourist attractions.

As part of the ‘takeover day’ event which began at Roundhay Park, pupils from Immaculate Heart of Mary Catholic Primary School in Moortown were given the chance to see at close quarters the work that is undertaken on a daily basis at one of Leeds most iconic greenspaces, and also to contribute to key decisions taken on the day.

Following an exclusive tour from the site manager, where the youngsters had the chance to offer their thoughts and ideas on possible improvements that could be made at the park, their next stop was the award-winning Chelsea Gardens where they met members of the council team that look after the site.

After assisting the gardeners there with the maintenance of the display, the children then paid a visit, as part of their management duties, to Tropical World, where they worked closely with the keepers to ensure all the animals were looked after correctly.

Included as part of their responsibilities was cleaning out the enclosures and feeding the animals, and they also had the opportunity to meet some of the attractions scariest inhabitants, which included a tarantula spider.

Takeover Day is a national initiative organised every year by the Children’s Commissioner for England. However Leeds decided to take things a bit further than the usual ‘Takeover day’ and held a ‘Takeover month’.

Councillor Mark Dobson, executive board member for the environment said:

“The takeover days are always a great learning experience, and it was fantastic that this year, six pupils from Immaculate Heart of Mary Catholic Primary School were able join in the work and decisions undertaken at Roundhay Park and Tropical World.

“A lot of time and effort is put in to ensure that Roundhay Park and Tropical World are kept looking fantastic for visitors, and it was extremely interesting and useful therefore to hear the perspectives, thoughts and ideas of our young people about the park and how it might be improved.

“I would like to take this opportunity to thank them for the contribution they made, which really was superb.”