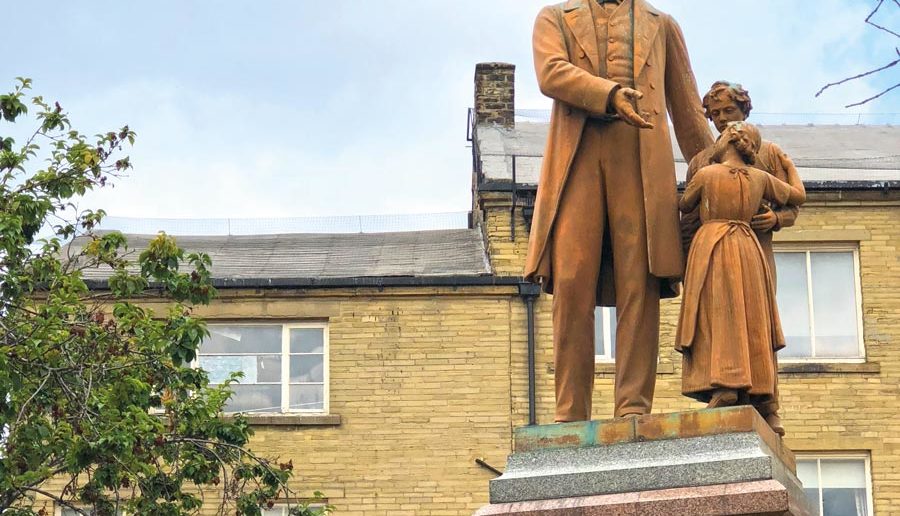 He became known as the ‘factory king’ due to his tireless work campaigning for children’s rights and wrote an angry and passionate letter to the Leeds Mercury newspaper. In the letter he attacked the morals of the people who used children as cheap labour in workplaces for hours on end and referred to it as ‘Yorkshire slavery.’

are every morning wet by the tears of innocent victims

at the accursed shrine of avarice who are compelled not

by the cast-whip of the negro slave driver, but by the

equally appalling throng or strap of the over-looker to

hasten half-dressed, but not half fed, to those magazines

of little children, both male and female, but principally

female, from seven to fourteen years of age, are daily

compelled to labour from six in the morning to seven in

the evening… with only thirty-minutes allowed for eating

Richard Oastler was born in Leeds in 1789 the youngest son of Robert and Sarah. The Oastlers were Wesleyans and in 1790, the famous John Wesley stayed at their home and even blessed the infant Richard.

Oastler had a good education with a desire to enter the legal profession much to the objection of his father who apprenticed him to an architect, but unfortunately, he developed an eye problem and he became a cloth dealer.

In 1820 after the death of his father who was steward of the Yorkshire estates of Thomas Thornhill near Huddersfield, Richard succeeded him in the post. Ten years later in 1830 during a conversation with one John Wood a Bradford manufacturer, Wood was surprised that Oastler had not paid much attention to the Factory System and the cruel treatment children were receiving from employers who took advantage of them in their self-seeking ambitious greed to squeeze as much work out of them as they could.

This was a time when children worked fourteen hours a day and sometimes would have to crawl under moving machinery where adults couldn’t, and this often led to children being severely injured and even worse. It was a dreadful time, something had to be done to stop this barbarity to children.

Oastler’s main objective was to decrease the gruelling long hours that children were forced to work to ten hours a day. Of course, this idea was hardly popular with greedy grasping employers whose opinions hardened against the whole idea.

In 1832, to show that they meant business Oastler’s supporters, some twelve thousand, marched to York and assembled in Castle Yard, while at Wibsey Moor in Bradford, Oastler himself said to his supporters:

“It is blood against gold.”

In 1833, the movement was halted temporarily due to a bill being introduced by Anthony Ashley Cooper, the future seventh Earl of Shaftesbury. Apparently, the bill was deemed one sided and only gave the worker’s opinions. In April that year the government set up a Royal Commission to look into the plight of the factory children.

In 1834 Oastler bitterly opposed the Poor Law Amendment Bill and later in 1837 he stood for parliament twice as a Tory anti-poor -law factory reform candidate, but failed to gain a seat. The following year Thomas Thornhill dismissed him from his post as steward because of his refusal to give up on his political activities.

Richard Oastler was jailed for debt in 1840 in the Fleet Prison in London after there appeared to be financial discrepancies in the management of the Thornhill estate.

In 1844 a fund was raised for his release, but his health had suffered and he was never the same again. In 1847 the ‘Ten Hour Bill’ was passed and Richard Oastler the ‘Factory King’ finally retired from public life. He died in 1861 in Harrogate, his wish was to be buried at St Stephen’s, Kirkstall in his native Leeds. He had earned his place in the history of the textile industry, his life being devoted to defending some of the most vulnerable of the Victorian era from some of the most ghastly and greedy employers of the day. The Blue Plaque is on the wall of ‘The Wardrobe’, 6 St Peter’s Square in Leeds.