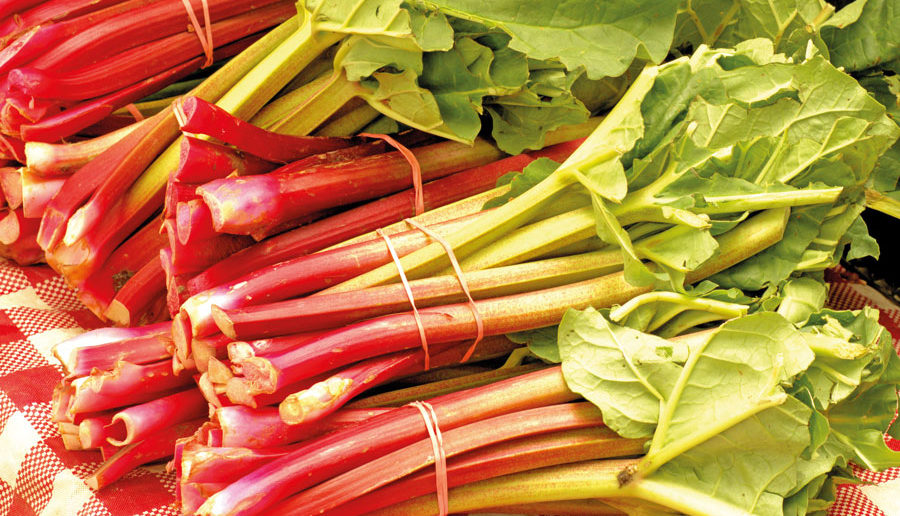 As we celebrate Yorkshire Day this month, there are many things which make us proud of our magnificent county – the stunning scenery, the history, the dialect, the wonderful people, and of course our food! We have a lot of food to be proud of too – a true Yorkshireman/woman loves their grub from the good old Yorkie pud and Wensleydale Cheese to Pontefract cakes and Yorkshire mixture sweets. However, being the foodie that I am (Yorkshire born and bred), if I were to write about them all there would have been no room left in the paper for any other news or features! So, with my word limit in mind I chose to focus on one thing only, and in honour of Yorkshire Day it had to be rhubarb.

The world-renowned Rhubarb Triangle, just down the road from Leeds is responsible for many a delicious dessert across the globe so this month’s feature looks at the history behind the vegetable – yes a vegetable! And how Yorkshire came to be the capital of forced rhubarb. Plus, my favourite recipe for rhubarb crumble. Enjoy!

The history of rhubarb goes back a long way with recorded use in ancient Greek and Roman medicine, and possibly even earlier use as a laxative in Chinese medicine. The Romans imported the roots from unknown barbarian lands and the word rhubarb is of Latin origin – first being called Rha barbarum which eventually evolved into rhabarbarum.

Used as a drug, it was an important ingredient for treating a variety of ailments including those of the gut, liver and lungs. Rhubarb first appeared in western Europe in the 13th century when Marco Polo is said to have brought it upon returning from his travels from Asia. At this point it was referred to as the Rhacoma root and was so valuable as a medicine by 1657 that in this country it was worth three times the price of Opium! Tudor England attempted to grow the root here, but the wrong strain was brought over, and it did not do well in English soil. The use of rhubarb slowly went into decline as the advent of modern medicine took over.

The use of rhubarb in English cooking first appeared in the late 18th century as a replacement for gooseberries in pies but didn’t become overly popular until the accidental discovery of forced rhubarb in 1817. In Chelsea Physic Gardens, some roots were accidentally covered with soil in the winter months. Several weeks later, the soil was removed, and the tender shoots were found, which had a far better flavour than normal rhubarb. Commercial growers in London then began to purposely cover the shoots with soil or manure to ‘blanch’ them. The forcing of rhubarb in Yorkshire began in 1877 with the Whitwell family being the first large scale growers in the region. Joseph Whitwell built special sheds for the sole purpose of growing rhubarb out of season. The Yorkshire soil was perfect for rhubarb to grow, and with cheap coal in plentiful supply locally to heat the special sheds, the resulting rhubarb was far superior to that produced anywhere else. Demand for rhubarb increased, and so did the producers here in Yorkshire. At the height of its popularity, there were around 200 different growers all centralised between Leeds, Wakefield and Bradford covering an area around 30 square miles– giving rise to the name of The Rhubarb Triangle as it became known globally. By this point, the quality of crops from Yorkshire was so renowned that producers in other parts of the country simply could not compete and stopped growing it altogether. Most of the crops went to the London markets, with a large quantity also being transported to Paris where it was also popular.  As such a large amount of rhubarb was being transported daily, the Great Northern Railway Company began running an express train from Ardsley station every weekday night during the forced rhubarb season of Christmas to Easter every year right up until the winter of 1961-2. This train, containing nothing but carriages full of the precious stems became known as the Rhubarb Special.

During WWII, the government fixed the price of forced rhubarb so that it was within the means of ordinary people, and during a time of rationing and food shortages it became part of the staple diet of wartime Britain. However, because of the lack of sugar available, the sour vegetable was not that popular with the generation of children being almost force-fed the stuff during the war. When the war ended, and overseas trade began to pick up again, bringing with it new tropical fruits, the popularity of rhubarb fell even further. This was disastrous for the Rhubarb Triangle, as in the face of over production, many families went bankrupt and others sold up before they did.

Today, the Rhubarb Triangle is around 9 square miles between Wakefield, Morley and Rothwell. The remaining farms growing the forced rhubarb still produce the best in the world with celebrity chefs referring to Yorkshire Forced Rhubarb as ‘Champagne rhubarb’. Wakefield holds an annual rhubarb festival and the forcing sheds have become tourist attractions.

The cultivation method for forced rhubarb has not really changed since the 1800’s. The plants spend two years out in the fields where they can absorb energy from the sun and store it in their roots as carbohydrates. When they are moved into the heated sheds they are kept in complete darkness. The heat causes the plants to grow and they use the stored carbohydrates to do so – transforming it into glucose which gives the rhubarb its sweeter flavour. Due to the darkness the stalks are smooth and crimson in colour rather than the green hue of the naturally grown stems. Farmers harvest the stalks in candlelight.

In 2010, twelve farmers within the Rhubarb Triangle were successful in their application to have Yorkshire Forced Rhubarb added to the European Commission’s Protected Food Name scheme. The PDO status helps promote the product and protect against other products outside the area using the name. Others on the list include Stilton cheese, Champagne and Parma ham.